The intervention took place in Bar Elias and forms part of the research project Public Services and Vulnerability in the Lebanese Context of Large-Scale Displacement, funded by the British Academy and led by Principal Investigator and IGP Director Professor Henrietta Moore 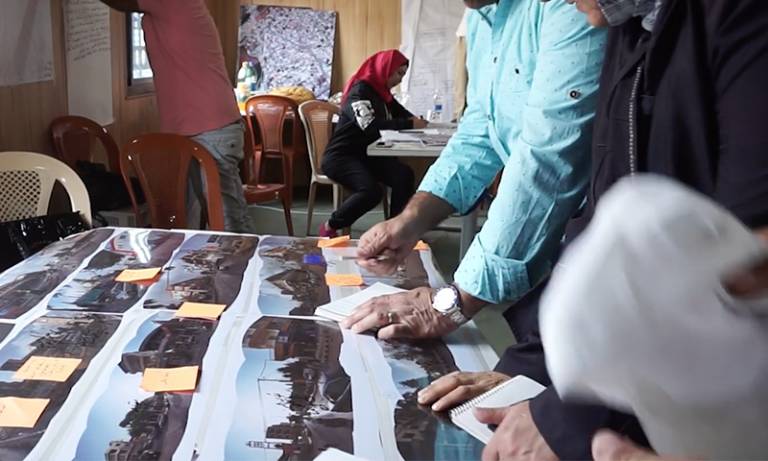 An interdisciplinary team from the Bartlett, including staff from the IGP, are working in Lebanon to facilitate a participatory spatial intervention to address the vulnerabilities of refugee and host communities through infrastructures. A collaboration consisting of staff from the Institute for Global Prosperity and Development Planning Unit, together with the UK charity and design studio Catalytic Action, this team form part of the British Academy-funded Project: "Public Services and vulnerability in the Lebanese context of large-scale displacement", led by Principal Investigator and Founder and Director of the Institute for Global Prosperity, Professor Henrietta Moore.

The team, led by Dr Andrea Rigon, includes Dr Hanna Baumann of the IGP, Professor Howayda Al-Harithy from the American University of Beirut, and Joana Dabaj, Riccardo Conti and Romona Abdallah from Catalytic Action. Their work is based in Bar Elias, a town on the road between Beirut and Damascus, which hosts Lebanese, Palestinians and Syrians and is characterised by social tensions created by different intersecting dimensions of people's identity, including nationality, gender, age, class and legal status. The population of Bar Elias has more than doubled in the past few years with the influx of Syrians.

The design of the intervention began with the recruitment and training of citizen scientists based in Bar Elias in early 2018. This was followed by research conducted during the 2018 DPU SummerLab series, facilitated by Professor Camillo Boano and Catalytic Action, analysing the public spaces of Bar Elias. The main entrance road to the town was then chosen to be the site for the intervention because it is used by all communities and has the potential to address a large number of residents' vulnerabilities.

In December 2018 the citizen scientists helped to shape a proposed design for the participatory spatial intervention. The design for this emerged during a workshop, through which participatory design and participatory research methods were deployed with a focus on incorporating a diversity lens to explore intra-community inequalities around vulnerabilities and infrastructure. This created a unique space through which the citizen scientists, who come from different groups, could jointly design an intervention to address their vulnerabilities while helping them to achieve their vision. Feedback during the workshop included:

The initial phase of the process was captured in the video below, which explains how residents analysed their context, discussed their aspirations and vision for the town and identified interventions.

Find out more about the project Public Services and Vulnerability in the Lebanese Context of Large-Scale Displacement, funded by the British Academy, here.