Dr Matthew Davies on prosperity, collaboration and the launch of PROCOL Kenya 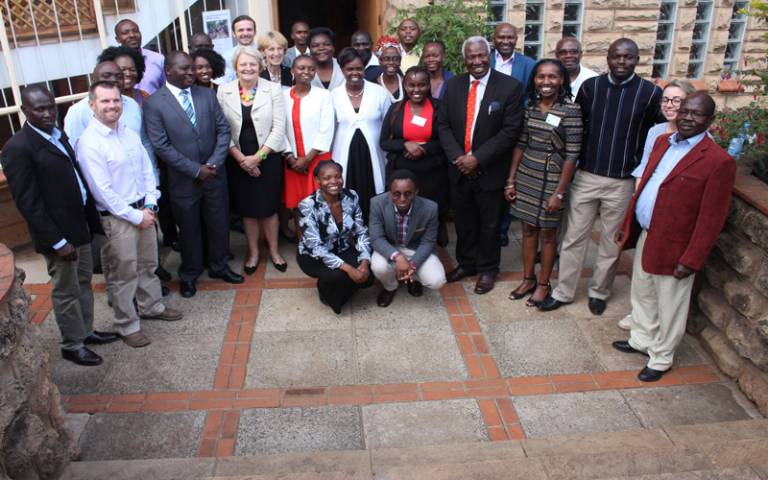 By Dr Matthew Davies, Associate Professor at the Institute for Global Prosperity

In many parts of the world there is widespread dissatisfaction with contemporary economic systems and the impact they have had on livelihoods and the environment. This dissatisfaction has been expressed in diverse ways, from anarchic protests, to calls for 'degrowth', and right wing nationalism. Within this cacophony of divergent voices a small but growing community are arguing that what is needed is not an outright rejection of society and the economy as it stands (whether on the left or right) but rather a re-adjustment of values and ideas, a re-imagining of what society should prioritise, and a re-thinking of what the economy should be and do.

This community take their lead from multiple critiques of growth-based GDP economic thinking, such as Stiglitz, Sen and Fitoussi (Mismeasuring our Lives: Why GDP Doesn't Add Up) and the work of thinkers such as Tim Jackson, (Prosperity Without Growth) and Kate Raworth (Doughnut Economics). Many of their ideas are crystallising around the concept of 'Prosperity' as a property that embraces both human wellbeing, satisfaction and capability, alongside the health, sustainability and resilience of the natural world.

The Institute for Global Prosperity (IGP) at University College London was established to enhance, refine and disseminate just such ideas about prosperity, and most importantly to turn them into operational policy so that they can help shape peoples lives for the better. More than this, researchers at the IGP argue that prosperous societies do not take one form or one type, but rather that prosperity has multiple forms for different peoples, cultures and places and that it must be co-created or generated by the people in those contexts. This simple idea is radical, because it argues that there is no singular path to development or progress, no model to be transferred from one place to another, no 'developed world' or 'Global North' to be copied. Instead, prosperity must be generated in context and in today's changing, unstable and unpredictable world, new forms of prosperity are just as likely to emerge from the 'Global South' as they are from the Global North. In other words models for change from Africa, indeed from Kenya, may be globally inspirational and better suited to the challenges of the future than those from the 'old world'.

The IGP has been working in Kenya and across Eastern Africa since its inception. While Kenya embodies many of the challenges faced across sub-Saharan Africa, we also see Kenya as a hub of innovation and inspiration, and we aim to foster home-grown solutions to these challenges. In 2018, the IGP established Prosperity Co-Lab (PROCOL) Kenya to begin a debate about what prosperity really means in Kenya and across Eastern Africa. We want to understand the real voices of citizens, value the knowledge, experience and ideas that they have and then work with communities, government and other stakeholders to co-design novel, innovative pathways to prosperity that break from the old norms of economic growth and market integration. We also aim to build the robust empirical data and research on which these novel pathways to prosperity can be based and are calling for multiple partners to achieve these ends.

On the 2nd November we launched PROCOL Kenya at an event at the British Institute in Eastern Africa (BIEA). The launch built on work already being conducted by the IGP with several Kenyan partners which has focussed on rural livelihoods and the future of agriculture (especially in Elgeyo-Marakwet County), and which include approaches to engage with and foreground citizen experiences, especially through the concept of Citizen Science. We also showcased work into new possibilities of collecting, collating and disseminating data, especially around the African Regional Data Cube. At the launch we were able to hear from a range of existing project partners, including Professor Grace Cheserek from the University of Eldoret, Dr Rosemary Okello from Strathmore University, the Elgeyo-Marakwet County Government, Dr Wilson Kipkore from the University of Eldoret, Mr Timothy Kipruto from the Marakwet Research Station and Dr Freda M'Mbogori from the BIEA. All spoke to the need for new alternative paradigms for change and embraced the key role of Kenya in generating models for change which value the knowledge and experience of its citizenry and home-grown thinkers.

Over the coming months and years, we hope that PROCOL Kenya will not only contribute to the emerging counter narratives around the idea of prosperity but that it will come to shape and refine them: adding a voice and ideas that represent a truly global vision of prosperity, which embraces difference and champions diverse values and perspectives. We believe that Kenyans have a great role to play in positively shaping the future in dynamic ways which break from old norms, and we hope that PROCOL Kenya will be a start to this process. Do please join us in this ambition!