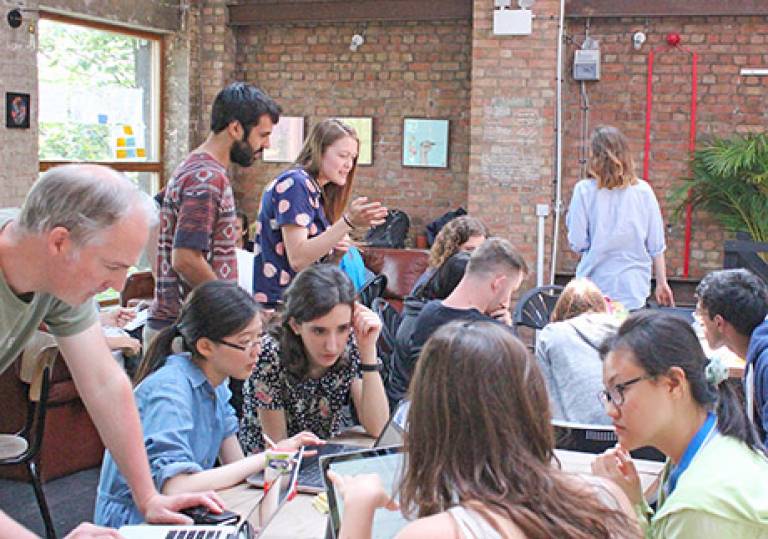 This year, the UCL Institute for Global Prosperity (IGP) was given the chance to run a ‘Grand Challenge Strand’ as part of the yearly Global Citizenship Programme at UCL. Taking place in early June, the Programme brings students of all disciplines together to work on a task collectively and use their different abilities to their maximum potential.

Around 60 students chose our strand – (Un)Urban –, which focused on the nexus of wellbeing, access to green space and superdiverse communities. We designed a strand that introduced our values and the work we do to UCL undergraduates, most of whom were in their first year of study. We wanted the students to learn first-hand the complexity of local prosperity: that everyone (including the environment) is able to thrive in an area with a diverse social demographic, and the best place to exemplify this is right on our doorstep: East London.

Student groups were tasked with responding to a challenge set by a local East London organisation that drew upon some of the key themes of wellbeing, access to green space and superdiversity. They spoke to local community leaders and residents to better understand the issues and then worked with them to come up with solutions. In this way, they would have the potential to design a project or intervention capable of making a genuine contribution to enhancing the wellbeing of people in the area.

The students spent the first week of the two-week programme exploring concepts of wellbeing, diversity, and green urbanism. There were also sessions that taught students skills in Human-Centred Design (led by Mensch) and qualitative research tools. These are all commonly used in projects by the IGP, and would be essential for the students in their fieldwork.

In the second week the students were based at Stour Space in Hackney Wick. Here they met with local organisations that would pose them the challenge they would spend the next week researching and designing for. These groups represented the variety of ways in which sustainability and increased wellbeing is being achieved by the community.

We were amazed by the ways each student group approached their problem. The broad range of ideas was beyond anything we had expected, and the methods used to design, prototype and present their solutions made full use of the variety of skills that each student brought to the group. Being a multidisciplinary team, this was something we were particularly encouraged by. The initiative of many students to audio and video-record the process, to use big data alongside interviews, and to establish long-term relationships with local organisations inspired their teams, as well as IGP.

The group working on a problem set by creative regeneration agency Creative Wick went down the route of social sustainability, designing an electronic map that people with creative ideas could use to meet others who would be able to help them make those ideas a reality. Another group worked on finding a way to get more public engagement for the Mobile City Garden in Stratford’s Olympic Park. This self sustaining facility is home to public allotments, a bicycle repair shed and café, but many locals don’t even realise it’s there.

The project received a hugely positive response from our hosts at Stour Space, the local organisations involved and the students themselves, and as such we consider it a huge success. We were pleased to see students become so passionate about the work that we think is of the greatest importance in a world still dominated by GDP measures of success and siloed thinking. Establishing sustainable systems that ensure the wellbeing of everyone involved, as well as providing an environment where people can thrive socially and economically is vital both today and for the future. We hope that the interdisciplinary work the students have done over the last two weeks will encourage them to use the knowledge they gain from their degree to create new ways for people to prosper.