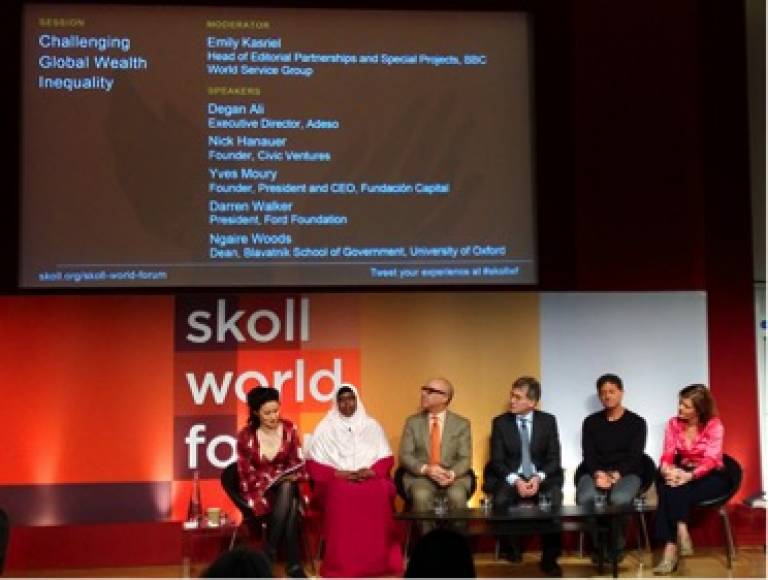 By Jun Han, D.Phil. Candidate in Sociology, University of Oxford

Global wealth inequality is growing fast. In 2014, OECD (Organisation for Economic Cooperation and Development) released a report, indicating that “in OECD countries, the richest 10% of the population earn 9.6 times the income of the poorest 10%. In the 1980s, this ratio stood at 7:1 rising to 8:1 in the 1990s and 9:1 in the 2000s”. In 2015, a report from Oxfam also warned that the combined wealth of the richest 1% of world’s population will overtake that of the other 99% of people by 2016, unless the rising inequality is checked. So, what is the driver of the global wealth inequality, and how might this growing trend be curbed? Furthermore, what can social enterprises do?

To shed light on this critical issue, the 13th Skoll World Forum organised a panel, “Challenging Global Wealth Inequality”, on 15 April 2016 at the University of Oxford’s Saïd Business School. The panel was moderated by Emily Kasriel, Head of Editorial Partnerships and Special Projects at BBC World Service Group. As shown in the photo, the five panelists - pioneers fighting against inequality - are: (1) Degan Ali, the executive director of Adeso (African Development solutions), an African development and humanitarian organization, (2) Darren Walker, President of the Ford Foundation, (3) Yves Moury, the Founder, President and CEO of Fundación Capital, and the 2014 recipient of the Skoll Award for Social Entrepreneurship, (4) Nick Hanauer, the founder of Civic Ventures, and (5) Ngaire Woods, the founding and inaugural Dean of Oxford University’s Blavatnik School of Government.

The panel discussion kicked off with the moderator requesting that each panelist take 20 seconds to paint a picture of inequality as they saw it from their own personal or work experience. Each shared a brief snippet: Degan Ali said that, in 2003, she saw startling situations of hungry children in Somalia; Darren Walker described the desperation and dreams of young African Americans; Yves Moury witnessed the lives of a group of mothers in slums; Nick Hanauer offered statistics of the income shift in the United States; Ngaire Woods highlighted the role of the government in relieving inequality, taking literacy improvement as an example.

The second question to panelists concerned the drivers of inequality. Degan Ali responded that the drivers of inequality are invisible, for example, some government policies. Yves Moury agreed with about drivers being invisible, and further discussed the relations between inequality and mobility. He said, “High inequality and high mobility is the American dream”, triggering laughter from the audience. Nick Hanauer pointed out that wealth had not dribbled down, and that the wages of the middle class had declined as well. Darren Walker talked about cultural norms, rather than technical issues, driving inequality, and encouraged more say on economic development and tax policy.

While the panel discussion was interesting, and covered a number of important areas of consideration, one aspect of social enterprises (SEs) was insufficiently discussed: how SEs use profits to address global wealth inequality. Social enterprises are drawing upon business techniques to address social issues and promote sustainable social change. What distinguishes social enterprises from for-profit enterprises is the way in which they use their profits. Social enterprises devote a significant proportion (usually 35% or half) of their profits to pursue social and environmental causes, rather than merely transferring profits to those at the top of the pyramid. Social enterprises share a significant proportion of profits with their stakeholders (including disadvantaged people, local communities, etc.) rather than primarily among their shareholders. This approach, I believe, can address the issue of global wealth inequality at its root.

Social enterprises not only can relieve income inequality, they also can spark change to government policies on some significant economic and social issues. My Ph.D. research has shown that, when social organisations or NGOs have transformed into social enterprises, their likelihood of achieving positive policy change from the government doubled, when other organisational and institutional factors remained equal (this paper was recently accepted by the journal Nonprofit and Voluntary Sector Quarterly). I further use two case studies to demonstrate how two typical social enterprises have successfully promoted five policy changes to tackle the economic and social inequality in China (this paper is forthcoming in July 2016 on the journal China Review).

In sum, social enterprises can play a critical role in challenging global wealth inequality and promote global prosperity and development. As Nelson Mandela's famous words remind us, “as long as poverty, injustice and gross inequality exist in our world, none of us can truly rest”.

Jun is part of the IGP research community and is a member of the Entrepreneurial Spaces & Collectivities (ESCies) research group co-led by IGP Senior Lecturer Tuukka Toivonen.