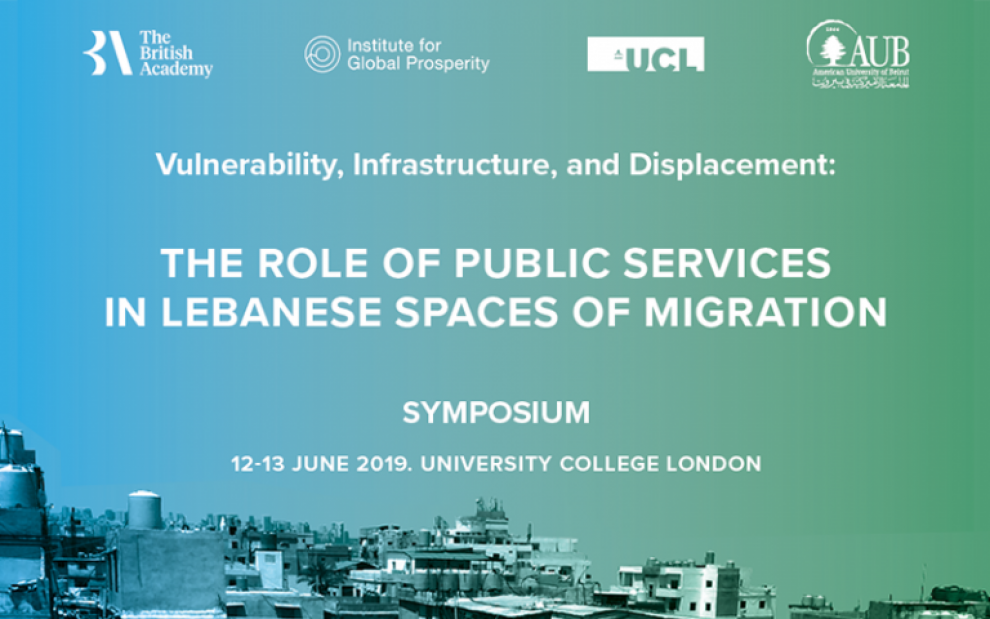 This interdisciplinary symposium, held in June 2019, brought together academics and artists from across Europe and the Middle East to examine the links between vulnerability and infrastructure, with a particular focus on Lebanon, and refugees from Syria and Palestine. The symposium formed the concluding event of the project Public Services and Vulnerability in the Lebanese Context of Large-Scale Displacement, funded under the British Academy’s Cities & Infrastructure programme.

The symposium began with an evening lecture from Saskia Sassen of Columbia University. 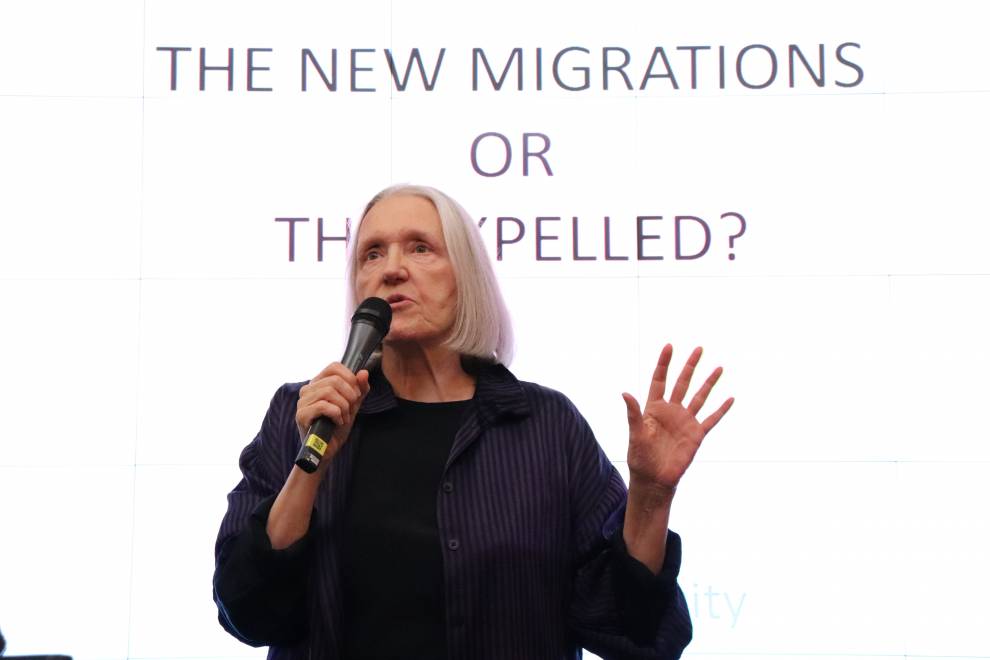 Professor Sassen's lecture focused on the emergence of a new type of migrant, A Third Emergent Migrant Subject Unrecognised in Law. You can read more about the lecture here.

Professor Henrietta L. Moore, Founder and Director of the Institute for Global Prosperity, opened day two of the symposium. 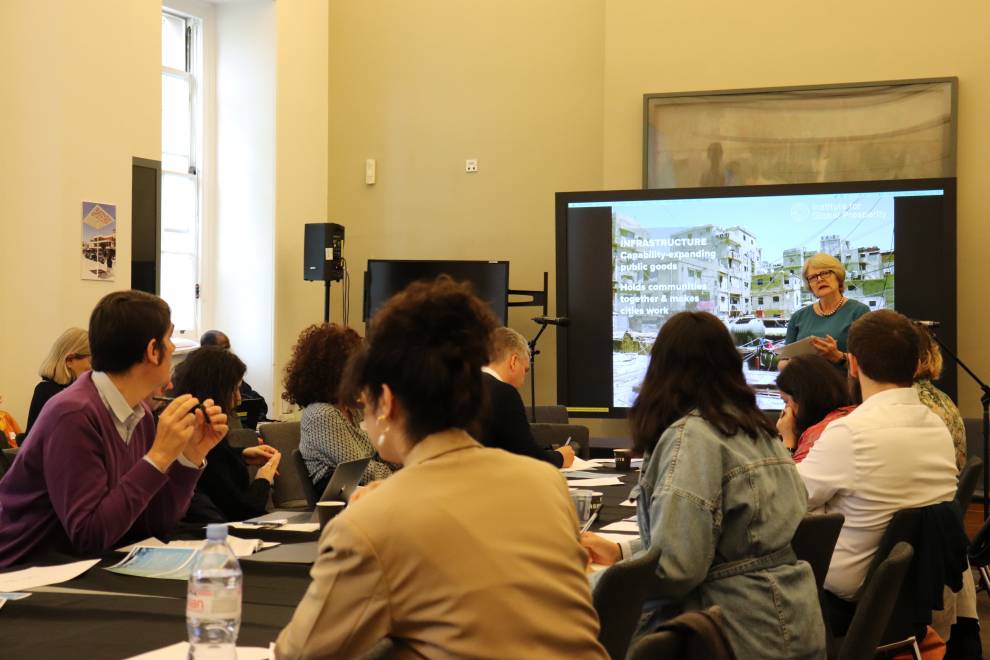 "In today’s world of massive income inequality, climate change, environmental degradation, food insecurity, and violent conflict, we have to approach displacement as something that is part of modern geopolitics, and something that is very closely intertwined with other global problems that cause mass movement of people. The vision of displacement as the new normal moves away from the political question of whether refugees should stay or go back – in fact it sees this question as largely irrelevant; instead, it focuses on creating solutions relating to how to create prosperity for communities impacted by displacement. One of the aims of this symposium is to offer a new approach to understanding and addressing these challenges."

Professor Philipp Misselwitz from the Habitat Unit at TU Berlin presented an account of the infrastructural challenges in temporary refugee housing in his paper Cities with refugees: reconfiguring planning approaches through the concept of arrival infrastructures. 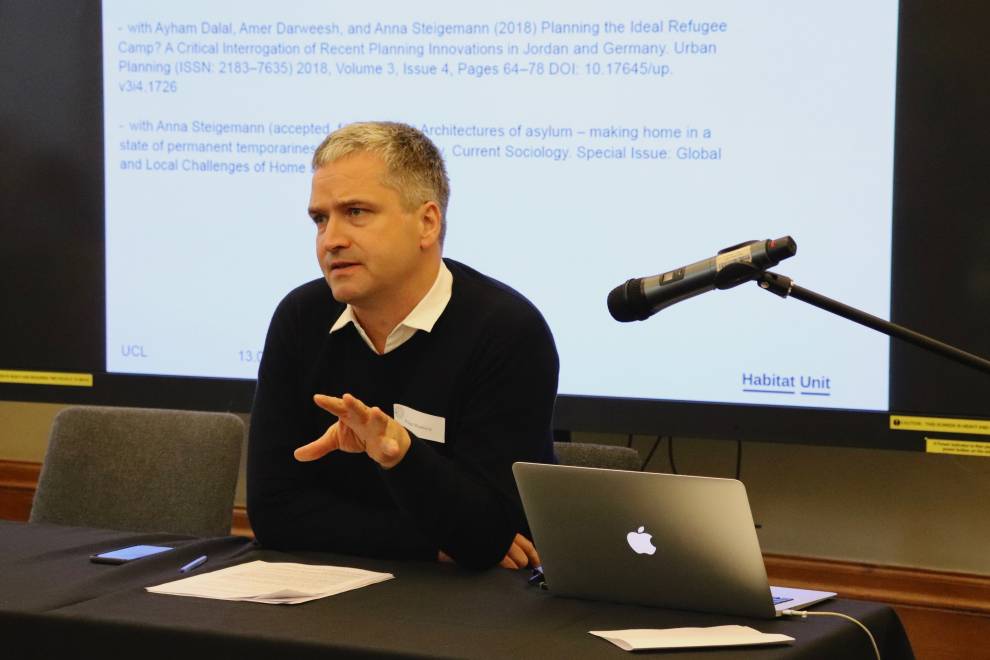 His paper traced the “innovations” that promise better, more effective, and more humane emergency shelters using the examples of the “Tempohomes” in Berlin:

“Here, planners were employed to address the ambivalent reality of protracted refugee camps and include “lessons” from failures of earlier solutions where refugee-initiated spatial appropriations that had led to congested spatial conditions – perceived by planners as dangerous and “out of control”. While I acknowledge the genuine attempt of planners to engage with the more complex needs and expectations of refugees, a careful look at the results of the planning for better camps reveals ambivalent outcomes. As camps acquire a new visual appearance, closer to housing, which mixes shelter design with well-designed public spaces, services and leisure facilities; these aesthetic “innovations” camouflage what essentially remains a highly deterministic infrastructure of disciplining and control. This, in effect, shrinks spaces of self-determination and self-provisioning through spatial appropriations.”

PANEL 1: VULNERABILITY AND THE (BUILT) ENVIRONMENT 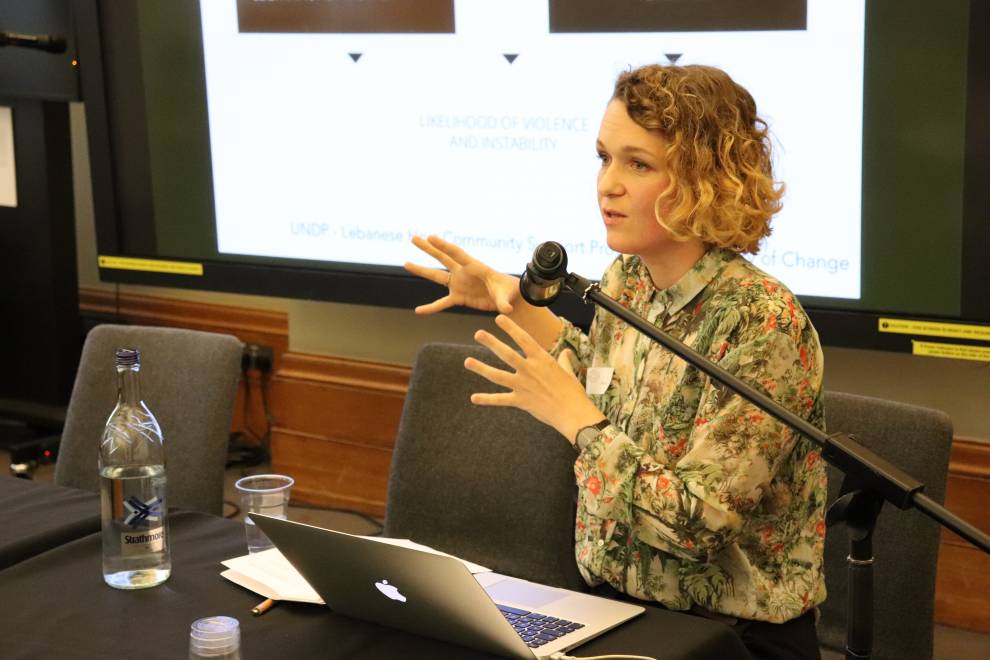 Her paper read humanitarian notions of ‘vulnerability’ against recent feminist and urbanist debates on the links between infrastructure and vulnerability. In doing so, it sought to introduce and grapple with some of the key terms of the symposium.

Dr Baumann argued that vulnerability must be understood as both relational and interdependent. Through this lens, she critically interrogated how humanitarian actors operating in Lebanon – who necessarily see vulnerability as a condition to be overcome, but also as an operational concept to prioritise certain groups over others in aid delivery – have employed the term in the context of the response to the Syrian crisis.

Click here for the video abstract to Hanna Baumann’s paper.

Samar Kanafani from the American University of Beirut, also a postdoctoral researcher on the Public Services and Vulnerability project, then presented her paper, Derelict spaces as migrant housing in Ras Beirut. 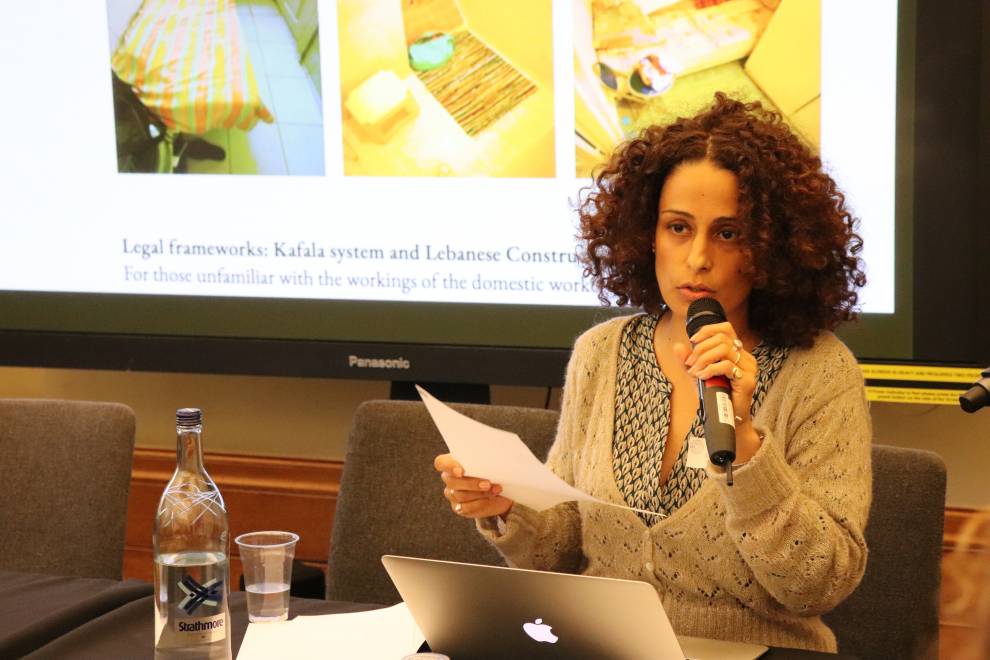 Dr Kanafani’s paper explored the way precarious migrants (both refugees and migrant workers) make spatial and infrastructural arrangements that enable them to access housing in residual and derelict spaces in a wealthy Beirut neighbourhood, even as they are instrumentalised within dominant regimes of urban capital accumulation and marginalized by urban residents with more social capital. 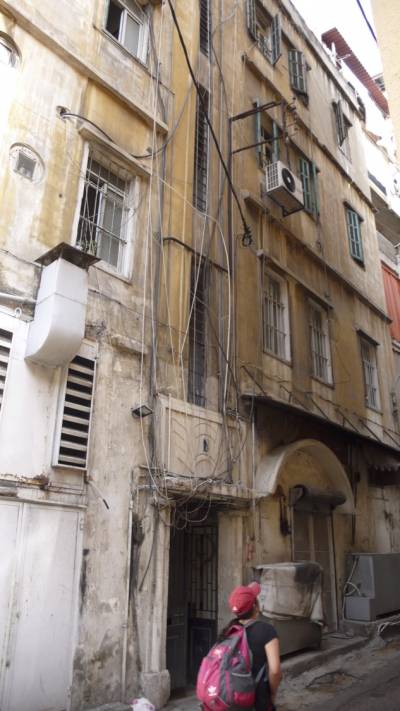 Public Works’ Nadine Bekdache closed the first panel with her presentation, Making the city and its suburbs through housing vulnerability: a close up on women and the elderly in Beirut’s Tareek el Jdeide. 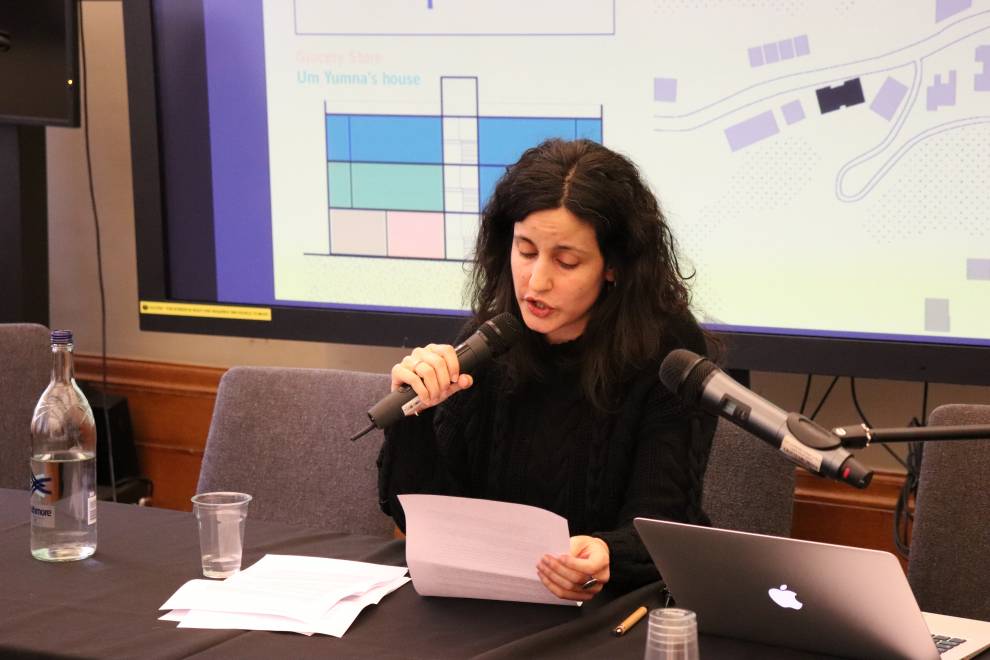 The paper investigated cases of evictions at the intersection of the urban landscape, legal frameworks and class with the specificity of age, gender, social capital, and social infrastructures. Read more about the findings and Public Works' research in collaboration with UCL on the DPU Blog. 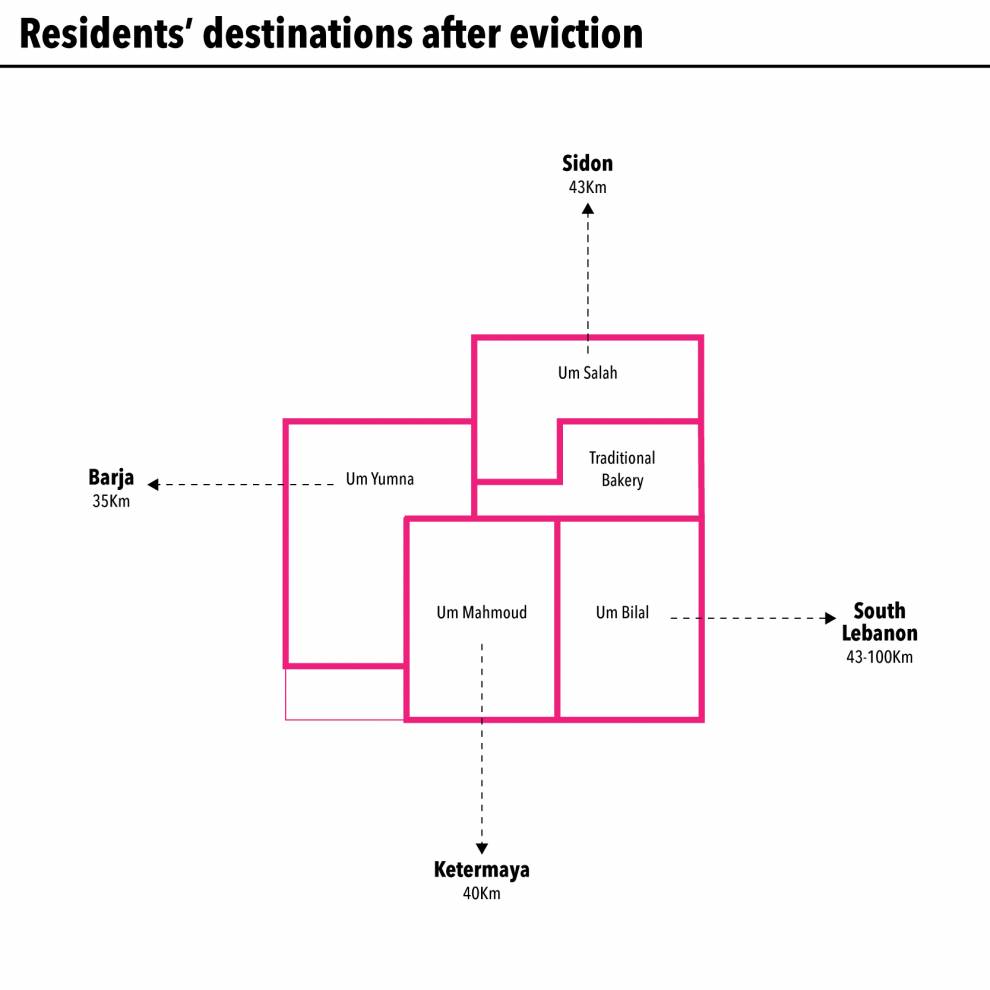 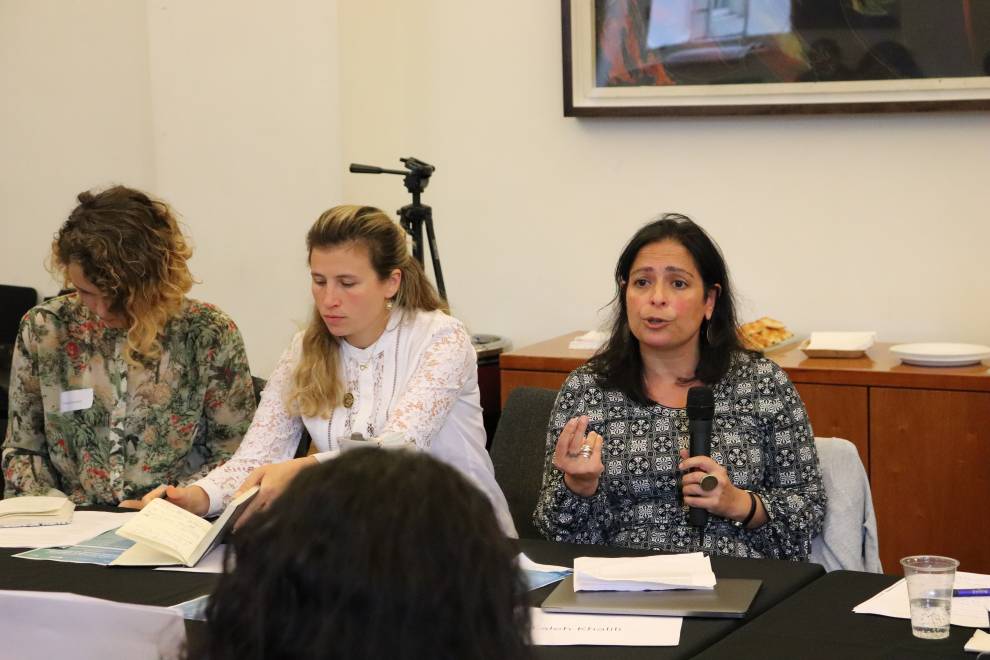 Professor Laleh Khalili from SOAS responded to the first set of speakers, while drawing attention to the spatial and historical continuities of the condition of vulnerability within Lebanon – between refugees, migrant workers, and impoverished citizens. She concluded her remarks on the individual papers:

“I think what Samar and Nadine’s papers show in generous and textured ethnographic detail, and which Hanna exhorts us to understand is that the forms of vulnerability generated here is not individual; it is not even categorical (or “inherent to certain groups” as Hanna writes), whether these groups are elderly women without social security or Syrian migrant squatters. But rather that these vulnerabilities shine a light on the one hand on longer-standing forms of structural injustice and on the other hand on the aggressive neoliberal solutions offered to these inequalities and injustices, including the pernicious discourse of resilience which Hanna spoke about.”

Following a break, Joana Dabaj from Catalytic Action presented the collaborative research and participatory spatial intervention in Bar Elias, which formed a substantial part of the British Academy-funded project. Click here to watch a film about the first phase of participatory spatial research in Bar Elias, carried out in October 2018 in collaboration between Catalytic Action and UCL’s Development Planning Unit and Institute for Global Prosperity.

Mayssa Jallad from the American University of Beirut opened panel two, chaired by IGP’s Nikolay Mintchev, with her paper Too close for comfort: witnessing vulnerability as a Citizen Scientist of Hamra, Beirut, reflecting on her experience collecting data on the ground in Lebanon.

As part of the Public Services and Vulnerability project, Mayssa carried out a building and infrastructure survey in the Beirut neighbourhood of Hamra, along with a team of Citizen Scientists (many of them locals) working with the RELIEF Centre. She noted:

“While this research process led to rigorous quantitative survey data collection, it simultaneously highlighting the intricate intimacies, power-plays, and realities of social life that are usually attributed to ethnography. In surveying the buildings and streets of Hamra, the team and I found ourselves grappling with the social disparities of the neighbourhood, its security concerns, and a spectrum of contradictory impressions regarding displaced Syrian residents.” 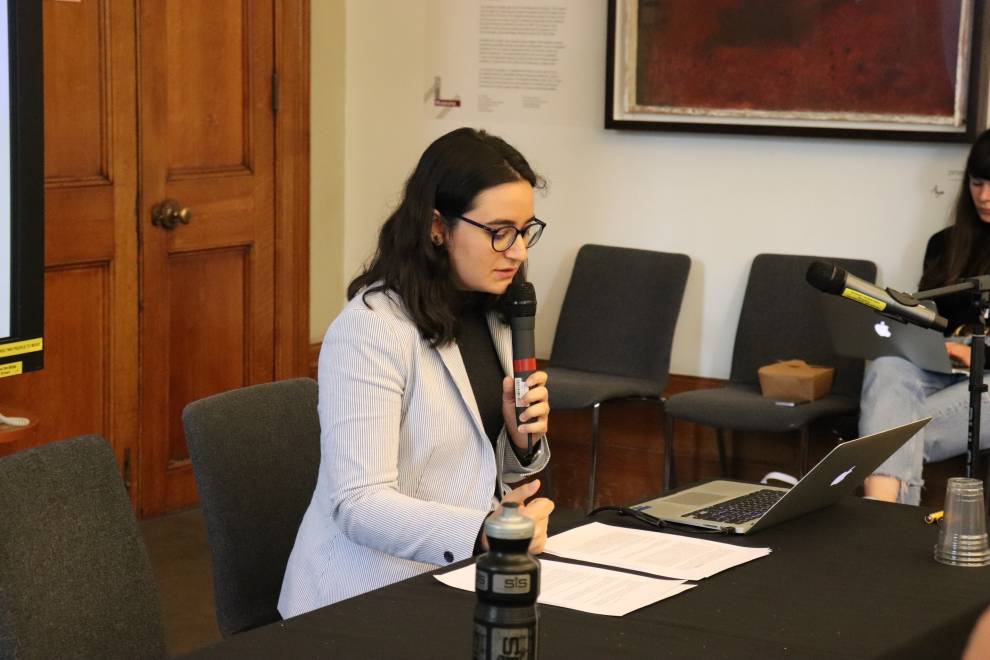 She related one ambivalent anecdote from the research:

“We had to find out if the building had a backyard. We suspected there might be one, since the house was bordered by narrow alleys on both sides. The small gate at the front yard was open, and so Adam and I took a swift walk around the building, finding a backyard. Given that the gate was open we assumed that this was open to the public, especially since in Beirut everything private tends to be gated and securely locked up. As soon as we returned to the front yard, a woman’s voice started scolding us from one of the interphone speakers. The voice was doubled from inside the front door at the ground floor apartment as well. An older man went down to meet us and the lady on the ground floor peeked at us from a window pane in the door. They were furious. The lady had seen us walk in the backyard through her curtains and could not believe our rudeness. I apologized profusely. Adam kept quiet, next to me. I introduced the study, and said we were researcher from AUB. “I don’t believe you.”” 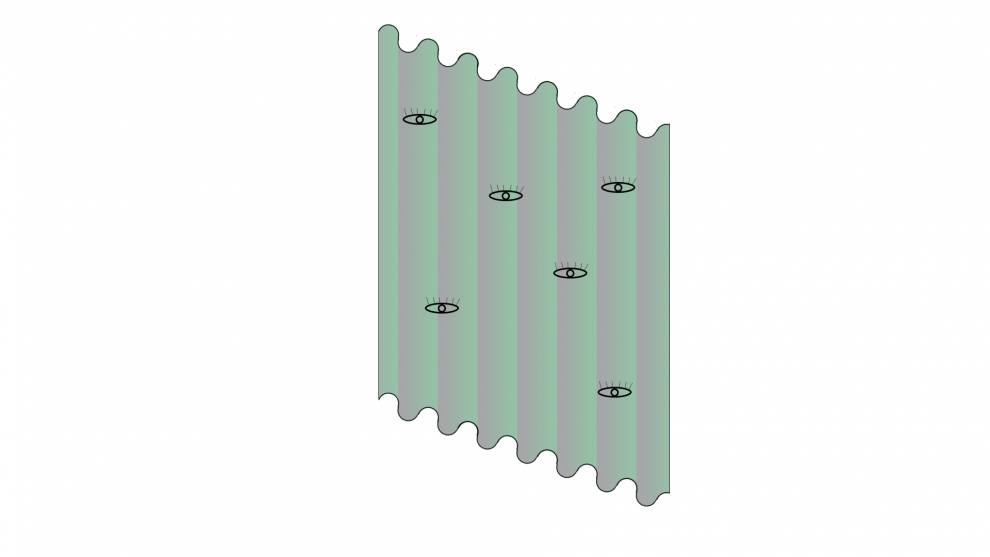 He began by noting:

“Many urban interventions in poor urban settlements in the global South assume all residents have similar aspirations and needs. However, these neighbourhoods are some of the most unequal settlements and interventions in these contexts create winner and losers. Different dimensions of diversity have to be taken into consideration in the planning of these interventions. Community participation approaches tend to portray an image of homogeneous community, leading to specific elite interests be portrayed as community interests.”

Taking the audience through a range of case studies from his practice, including participatory planning work in Lebanon, Dr Rigon argued that truly intersectional and relational diversity work must have the following elements: recognition, distribution, and representation.

Mira Tfaily of EHESS Paris, who is also Head of Research for The Bus Map Project in Lebanon, presented her work on The manufacture of illegitimacy: grassroots documentation of Lebanon's informal buses as a leverage to fight the instrumentalization of the unmappable. 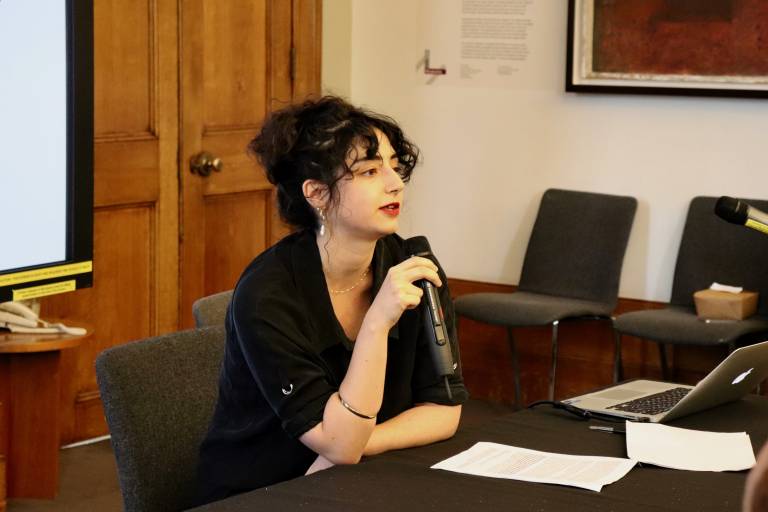 Her work analysed the discourses surrounding the invisibilisation and the romanticisation of Lebanon's bus network. It brought to light the active delegitimisation that permeates the perception of some informal practices, while other elite informalities are acknowledged and coopted by some planners and dwellers. Panel two closed with the University of Oxford’s Leila Ullrich presenting her paper, Towns vs. people: results of a qualitative WhatsApp survey with Syrian refugees and host communities in Lebanon. 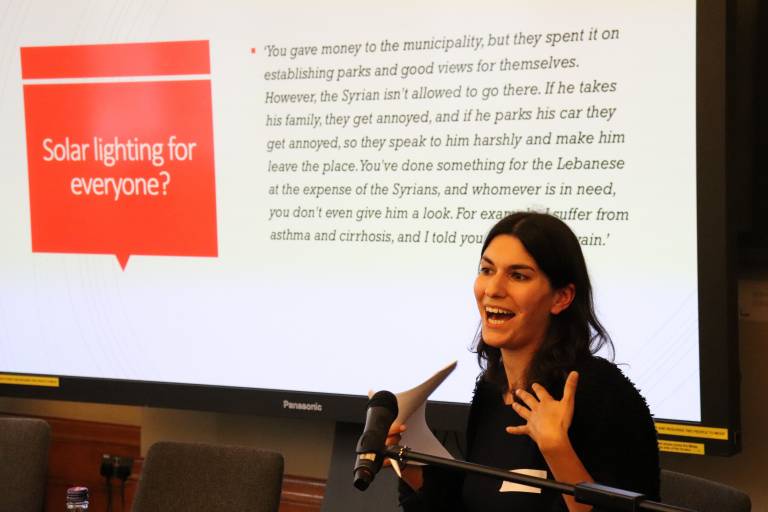 Based on a survey conducted via the messaging app WhatApp with over 1000 individuals, who shared their stories and insights on topics including their needs, fears, social relationships, as well as their views on humanitarian assistance and development. Dr Ullrich’s paper zoomed in on WhatsApp messages concerning public space and services, interrogating how ideas of belonging, vulnerability and otherness are expressed in Lebanese and Syrian discourses. The paper also situated the survey in the broader context of global knowledge production:

“In their messages, our respondents not only questioned the development framework in which the survey was embedded, but also the survey itself – its questions, its assumptions and purposes. They challenged a power-knowledge system that obscures their marginalization and exclusion through knowledge claims.”

You can watch Leila Ullrich’s video abstract here.  Learn more about the work in this UNDP report based on the survey.

Dana Abi Ghanem (Teesside University) opened the final panel with her paper, Electricity, infrastructure and the vulnerability of Palestinian refugees in Lebanon: the story of Shatila Camp’s “electricity martyrs”. Her presentation documented the tragic deaths of refugees who volunteer to fix the camp’s lethal electricity wires, which dangerously weave through the spatial fabric of Shatila.

Fadi Mansour then presented his work, Solid Waste Machine and Permeable Bodies: Toxicity, Capital and Vulnerability in the Lebanese Waste Crisis. Investigating the consequences of solid-waste mismanagement in Lebanon, his research work revealed the vulnerability of bodies entangled within an environment of increasing toxicity. 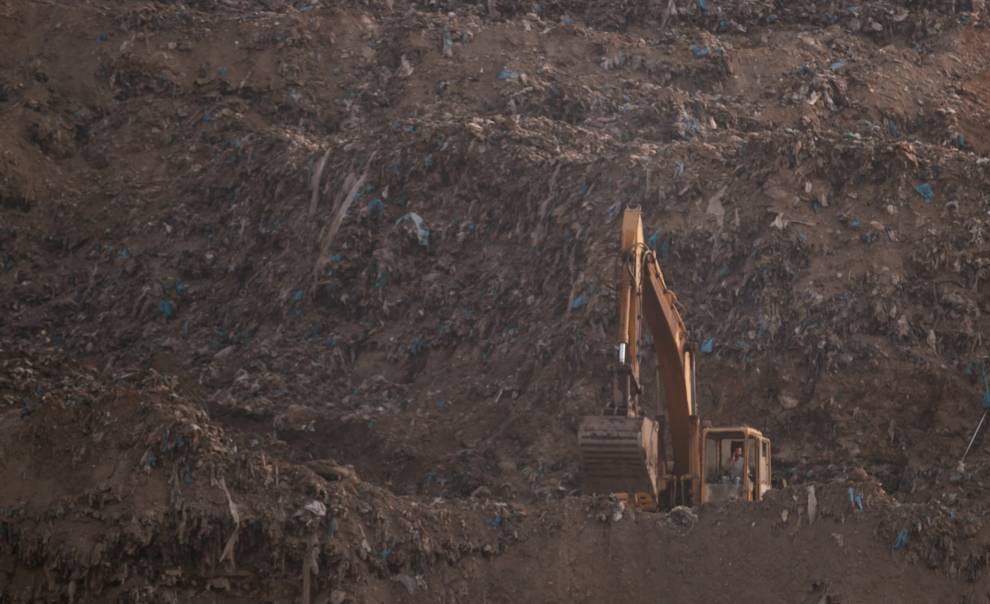 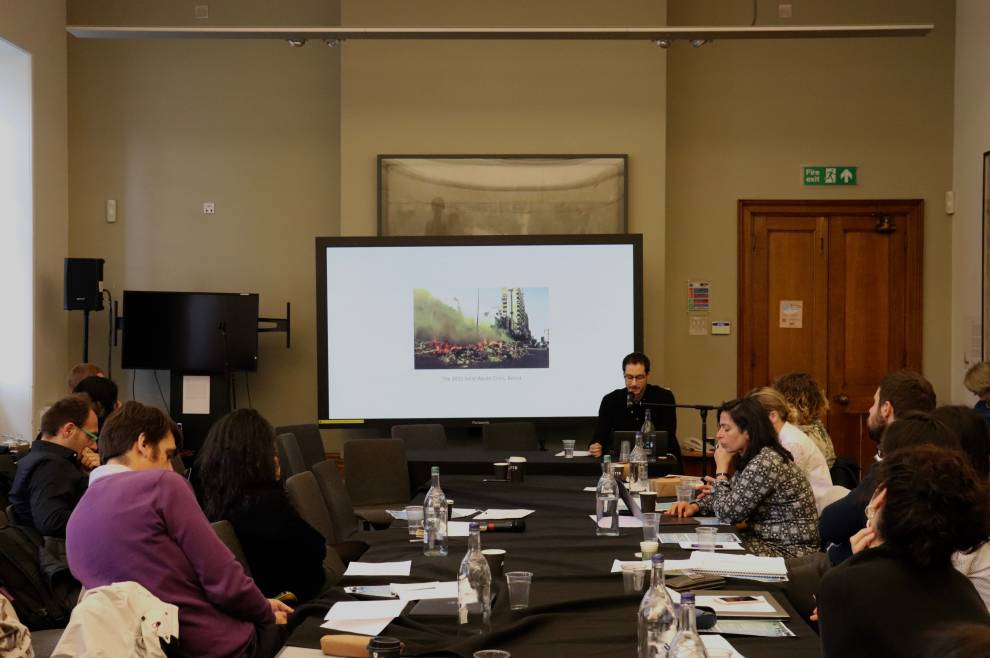 Lyne Jabri from KU Leuven/Lil Medina Initiative gave the symposium’s final presentation with her paper, Water in Saida: crisis and infamous infrastructures. Through the experience of an urban-activist initiative working in Saida (Lebanon) and through a closer look at the condition of water in the city, her paper tries to understand the dynamic that links crisis with clientelism and destructive forms of urban development. 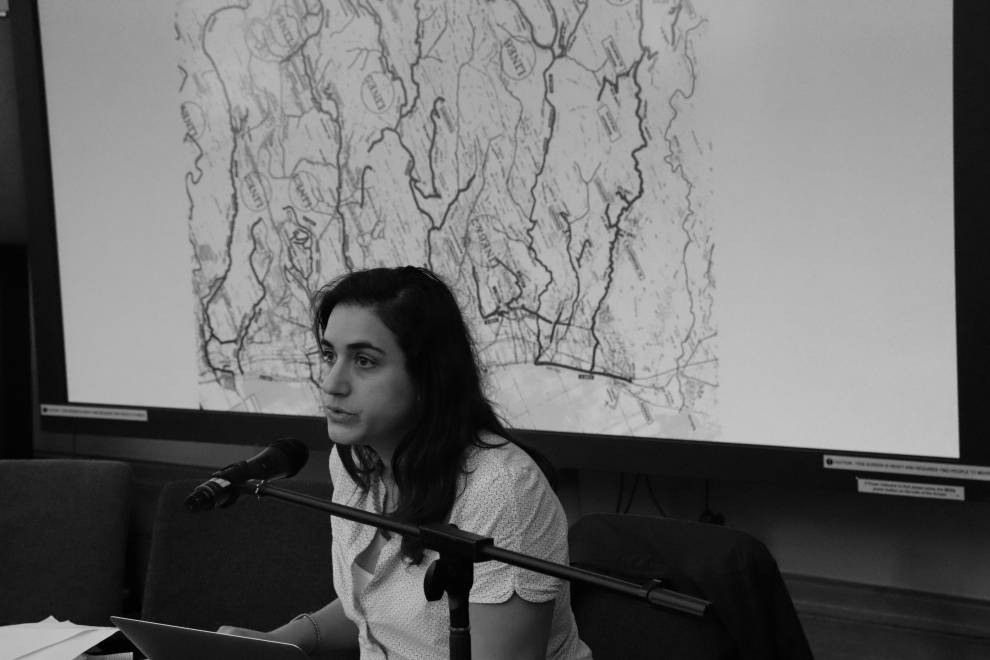 In providing an overview of the urban history of the city of Saida, using the case of its water infrastructures, she argued:

“It reveals that the biggest changes to the city occurr during times of crisis, often as a result of in-coming capital and financial aid. Any crisis sees the emergence of major infrastructural projects and urban plans that create significant economic and social transformations in the city – while often compromising much of what made Saida sustainable and self-sufficient.”

Her reflections on contemporary political-infrastructural issues in Saida were based on her personal experience as part of the Lil Madina Initiative since its inception in 2013.

Professor Eric Verdeil from Sciences Po responded to the panel, commending the speakers for the depth with which they had examined the circulations – both human and non-human – facilitated by infrastructures. 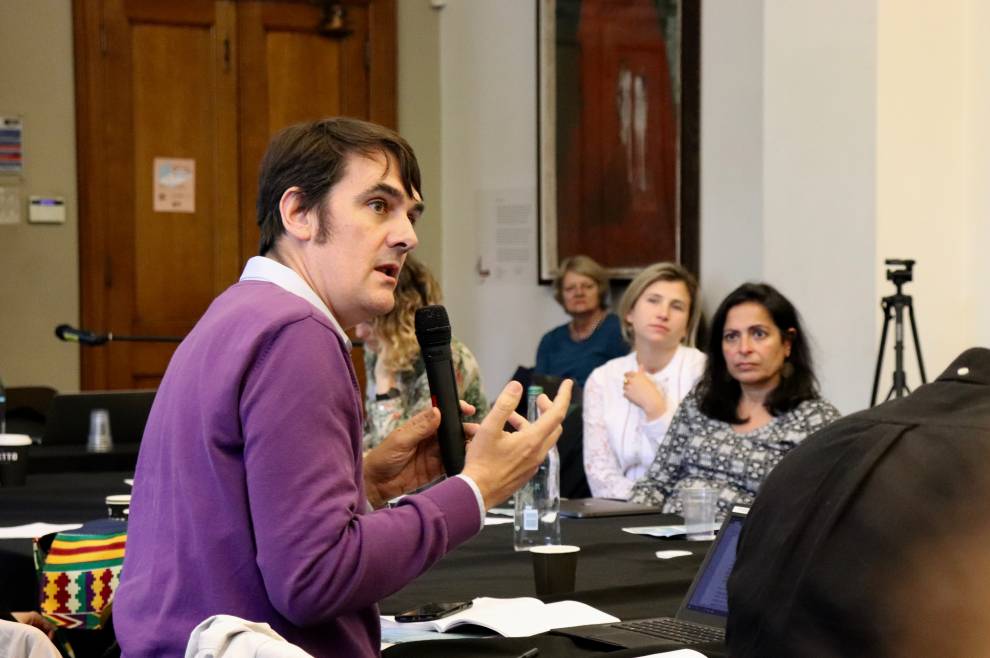 UCL’s Nick Tyler, concluded the events from an engineering point of view by pointing out not-always-obvious role of scale in infrastructural interventions. “Since Bazalgette we’ve thought that big problems require massive-scale infrastructural solutions. But sometimes it is the tiniest physical tweaks that make a significant difference in people’s everyday lives.” 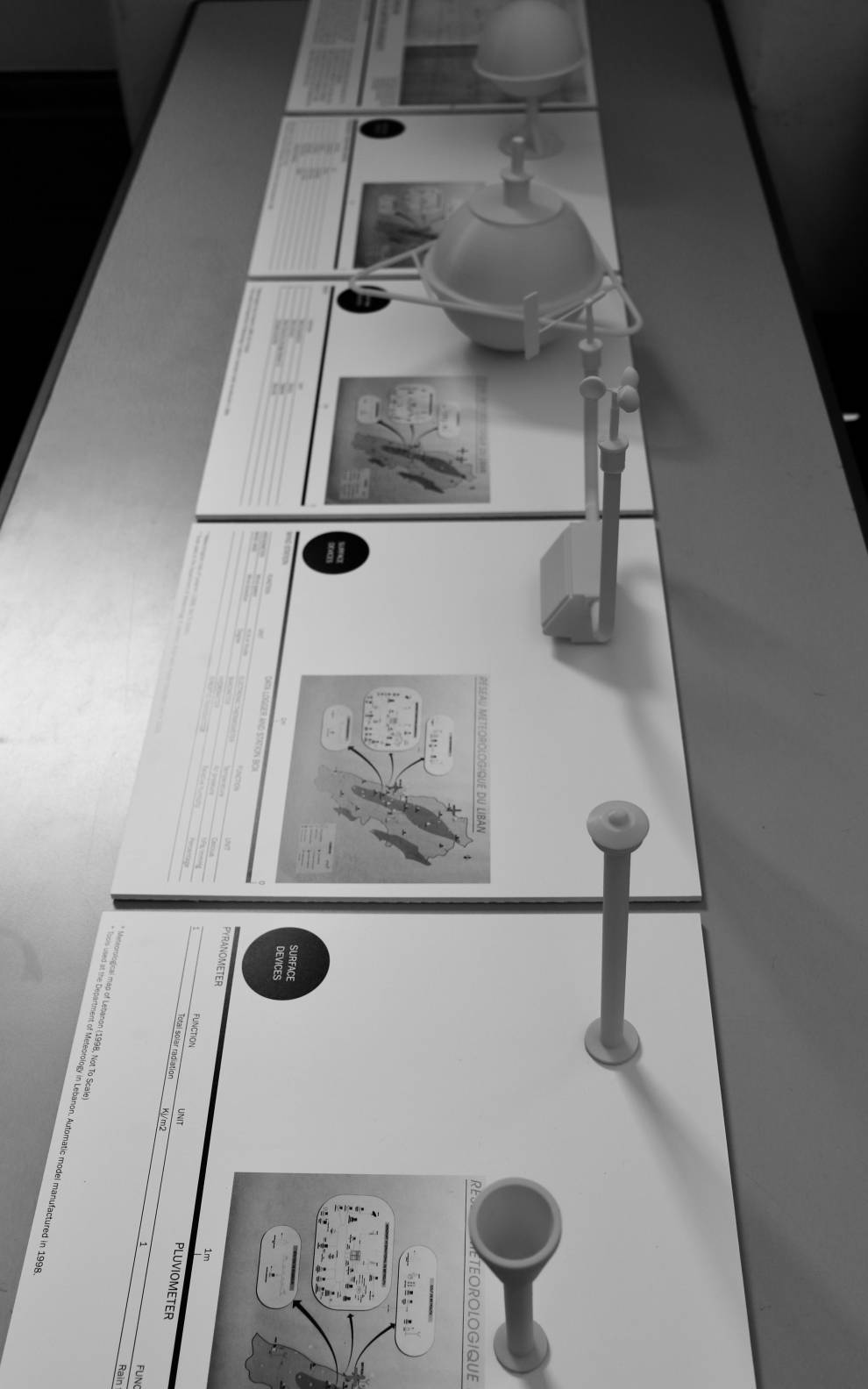 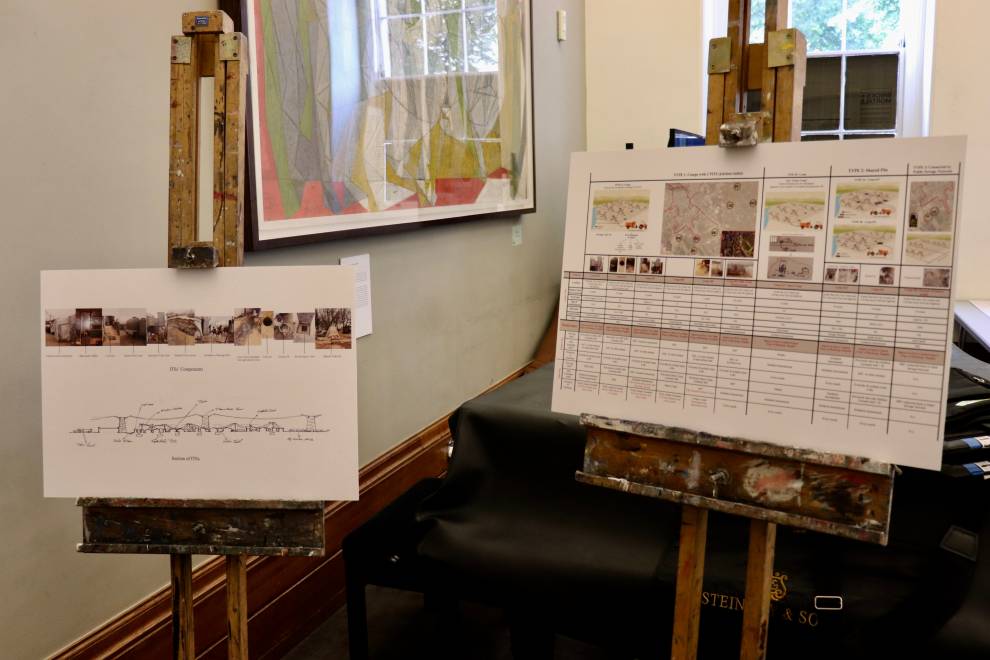 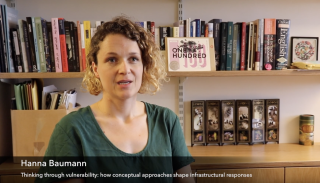 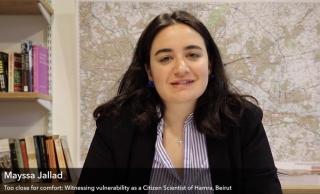 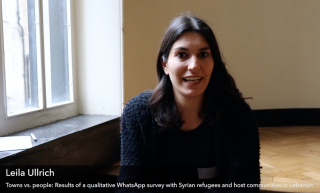 Read the UNDP report based on the survey, Below the Surface, here. 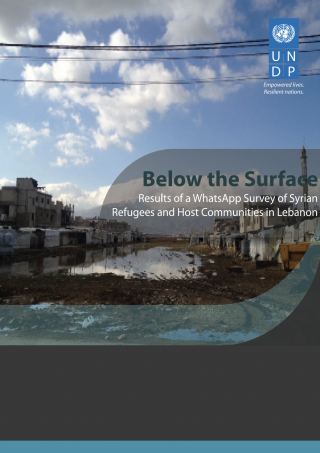 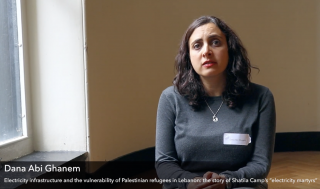 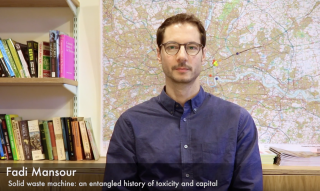 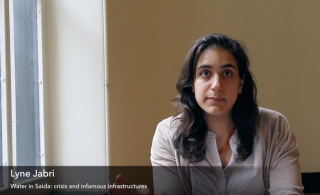