In October 2016 Habitat III will bring together global actors in Quito, Ecuador, to build on the work of Habitat II in Istanbul in 1996 and Habitat I in Vancouver in 1976. 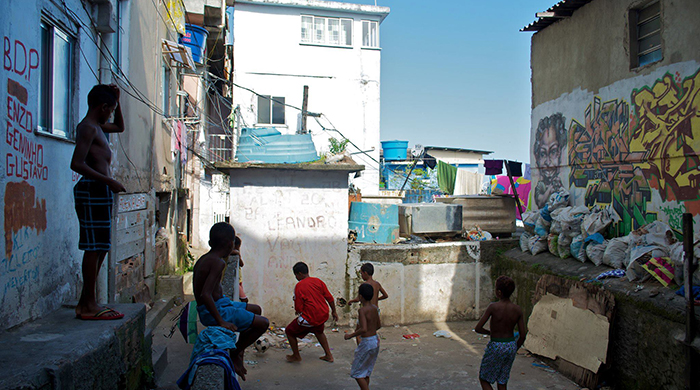 In October 2016 Habitat III will bring together global actors in Quito, Ecuador, to build on the work of Habitat II in Istanbul in 1996 and Habitat I in Vancouver in 1976. The stated aim of Habitat III is to adopt a “New Urban Agenda”, meant to guide the actions of national governments in pursuit of a more sustainable urbanisation.

The DPU is taking part in this process by participating in different initiatives aimed at stimulating the debate around the content of the new agenda as well as the process through which it is taking shape. The DPU's participation in the Habitat III process has occurred through different entry points, reflecting the broadness of the work undertaken at the DPU.

The DPU took the co-lead in the coordination of Policy Unit 7 of Habitat III on urban economic development strategies, and was represented by Le-Yin Zhang, and supported by Julio Davila. The final draft of the policy paper (pdf) focuses on the promotion of livelihoods, supporting the informal sector, and creating productive jobs.

A second contribution revolves around the inclusion of food and nutrition needs into the New Urban Agenda, with Prof Yves Cabanas participating in the Expert Meeting on Integrating Food into Urban Planning. The proposal was integrated into the Zero Draft of the New Urban Agenda.

The drafting of Chapter 5 of UN-Habitat's World Cities Report 2016 on sustainable development featured further DPU involvement. Led by Vanesa Castan Broto and supported by Liza Griffin, the chapter includes recognition of just sustainabilitites as a concept.

The DPU also joined the Habitat International Coalition Habitat III Working Group, which seeks a “New Habitat Agenda”—not merely an “urban” agenda—for the 21st Century. According to the aims of the working group, this “new Habitat agenda recognizes the ever-changing dynamics and continuity of human civilization and the built environment, respecting the urban-rural continuum, and forefronts greater autonomy, meaningful participation and respon­sible citizenship at the local level”.

DPU’s with HIC has focused on applying the concepts of the Right to the City to analyse key national reporting processes leading up to Habitat III conference. The analysis acts as groundwork for strategic engagement by HIC and its partners in the Habitat III process. For more information on this research download the report

And the summary of findings in:

More can be read about DPU's engagement with the Habitat III process in the article on 'Urban Transformations: The New Urban Agenda - Challenges, opportunities and DPU contributions to a new framework for a sustainable future' by Barbara Lipietz, and published in DPU News #60 (pdf).

The 'New Urban Agenda' and the potential for change

Partnering with Habitat International Coalition at a side event at the second Preparatory Committee (PrepCom2) for the United Nations Conference on Housing and Sustainable Urban Development (Habitat III), Nairobi, Kenya.

Roundtable discussion on the Right to the City and Habitat III at the DPU organized in collaboration with Building Social Housing Foundation (BSHF). London, UK.

Session at World Social Forum on civil society expectations for Habitat III. This will include presentation of findings from research on the national reporting processes. Tunis, Tunisia.

Central to our recommendations for the Habitat III process is that it should have a clearer set of guidelines for meaningful participation in the production of the new agenda. It should also articulate a commitment for social justice and urban sustainability based on principles of the Right to the City.

This has been elaborated in detail in our report examining national reporting processes leading up to the UN’s Habitat III conference in 2016.

A snapshot of our recommendations

Article - What room for the Right to the City in Habitat III?

World Charter for the Right to the City