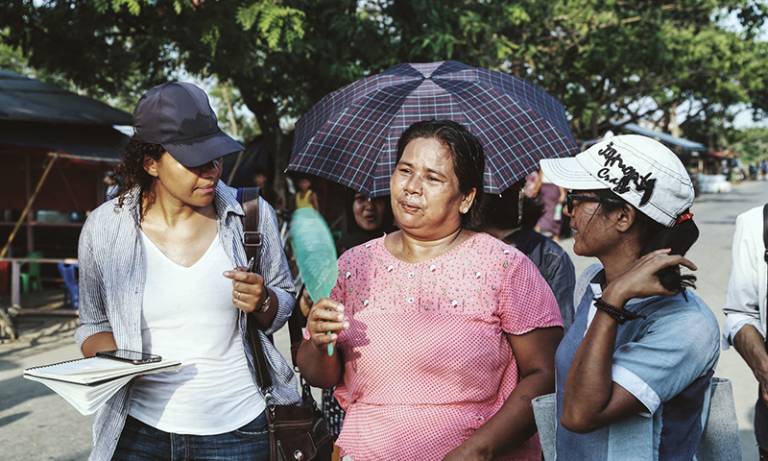 Before BUDD I worked for nearly a decade as a development practitioner, for organisations focused on an array of issues from HIV/AIDS in east and south Africa, to promoting health and education for girls in remote parts of India. Having always had a keen interest in design and architecture it was my time spent working in Lagos, Nigeria that shifted the way I understood my work in the context of the urban landscape.

In Lagos a close friend was the daughter of Alan Vaughan-Richards, a British architect who had moved to Nigeria and become a citizen of the country. In the 1960’s Vaughan-Richards was experimenting with methods and searching to hybridize climatic modernism. In this phase he built a house that remains the family home. The first time I went to the whimsical house, I had only just the week before been at the iconic ‘Floating School’ designed by Kunlé Adeyemi in partnership with a host of NGO’s. I was at the school for a community gathering which was attempting to halt the process of forced evictions taking place all over Nigeria. This gathering was specifically focused on the space of Makoko, an informal waterfront community, where the school was located.

While standing in the Vaughan-Richard house, built of a different era and of a totally different spirit, I was overcome with the contradictions of space in Lagos. My daily commute to work, which was only a 5.1km drive, could take upwards of two hours on the very worst days. The population was and is continuing to rise and people had carved homes and business out of every imaginable space in the city.

I was left with a significant question: how do you retroactively plan a city while taking into account future growth and current lives, without displacing hundreds of thousands of people?

This question simmered for many months and one day, while writing an article about the Vaughan-Richards house for a magazine, I came across the BUDD homepage.

I started reading about the programme and was immediately excited. For the first time in the seven years since completing my undergraduate degree I had found a programme that blended development with design in the ways that I had been experimenting with in my work. Then life got busy, I was still working in Lagos and would remain there for another year; the programme drifted to the back of my mind. In 2015 I moved to Geneva, Switzerland and finally with some time on my hands began thinking again about doing a masters. I looked into the BUDD programme again and decided to go for it.

From the first day I was inspired by the thinking of the programme, the wiliness to challenge traditional development discourses was refreshing for me, having always been the naysayer amongst my colleagues at development focused NGO’s. But what was most interesting to me was my cohort of classmates all of whom came from so many contexts and countries; it felt like an appropriate way to analyse global challenges.

The course is rigorous and it was this rigor that allowed me to focus my thinking and ideas in a way that I might not have otherwise achieved. I never did find an answer to the specific question that led me to BUDD, but I found a method of enquiry and a process for asking the questions. This method of critical analysis rooted in research-based design is one of the greatest strengths the course offers.

Since leaving BUDD I have worked as a consultant in Geneva and am in the continuous process of building an interdisciplinary studio that would bring humanitarian organisations, such as the UN and its various agencies, into conversations with architects, academics and designers. This is a very exciting project.

Additionally I have recently accepted a one-year contract working as an Urban Research Fellow for the City of Toronto, the city where I grew up. In a way I think this new position offers a moment of pleasant symmetry, as BUDD has brought me back to where I am from and the origins my activism, artistic and professional work but now with a completely new way of looking at that place.