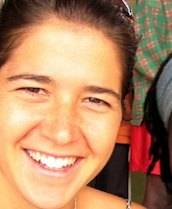 I hold a Bachelors degree from Concordia University in Communications and Filmmaking. After a few years working in the independent film scene in Montreal, I realized I liked to sleep at least a few hours a night and wanted to make a decent living. So I gave up my dreams of the silver screen and started organizing big events for rich people. Then I came to another realization, and decided I wanted to actually do something against inequality. So I applied for a job in Rwanda, working in communications and HIV AIDS.

I spent almost two years in Kigali and came to my third realization, that even though I think health is important, that I was passionate about environmental issues, as well as reducing inequalities. So I applied for another job, trying to stay in Africa, but I was sent to London, working for the International Institute of Environment and Development (IIED) on their climate change and communication teams. I spent a year there, coming to a fourth realization… that I needed to know more to make a difference. So, that’s when I went to the Development Planning Unit (DPU).

After completing the course, or rather, as I was completing the course, I started working again, finding that through my time at IIED, my film background and my experience in Central Africa, I could end up doing consultancy work as a freelance filmmaker and participatory video facilitator. Now I’m working on video consultations on forests for IIED, strategizing for the Red Cross Red Crescent Climate Center on communications and video and running various participatory video projects all over Africa. I’m busy and have found what I’m happy doing. Yeah!

The DPU’s ESD masters course gave me one year to think, read and write. True luxury if you ask me. It also created a space where I could practice arguing for the things I believe in, test my arguments and mostly, the support to believe that’s it not stupid or cheesy to think that we should and have to build a more equitable and sustainable world. It also brought me new friends, people I will probably call on for years to come.