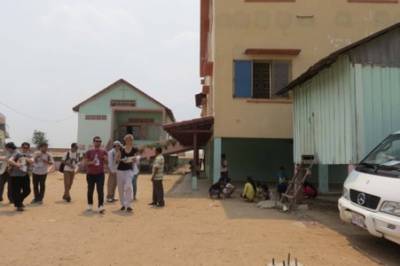 Being an architect from a protracted-conflict country like Syria has been always of challenge for me. It led me to constantly question myself about the role of citizens in the reconstruction processes since my graduation from the Architecture school in Damascus. The social responsibility and participatory processes of architecture have been missing in my Bachelor’s discussions and classes, therefore these questions remained and approached me to the BUDD programme, where the role of architects in place [re]making is questioned, and urban design follows necessarily a collective multidisciplinary approach.

Believing that architects should act differently when things change dramatically had placed me in the emergency and shelter departments with UN agencies during the conflict. This has exposed me directly to the increased poverty and injustices produced by the conflict. My project was essentially asking internally displaced people about their demands and try to translate them by conducting rehabilitation for public schools in order to become decent shelters. The encounters, experience, and question raised throughout this mission along with the pursue for alternatives have located me on the plane with only one destination: BUDD course.

Personally, I learned throughout this course that my questions are not required to be solved, rather than to be provoked in order to create spaces for new conversations, particularly that such questions will continuously emerge as long as changes happen in the city. I also had the chance to experience field work in Cambodia, an eye opener experience where we tried as group to think collectively, practice theories learned, respect filed ethics and survive under the work pressure.

Soon after completing BUDD, I kept the momentum by co-founding ‘Syrbanism’, an urban activism platform focuses on investigating the political, social and economic aspects of the urban discourses in Syria. Syrbanism is a space where communication is used to advocate for Syrian people’s rights and mobilize actions, so people can participate in rebuilding their country. The inspiration of this platform came from the BUDD classes about the importance of people to own agency where they participate in the production of space and knowledge. We are now in Syrbanism conducting a project that analyses the recent property law issued in Syria and examines its impacts on the reconstruction of Syrian cities.

On another note, I joined the Communication for Development Network C4D, a global network of more than 4000 professionals who examine the power of communication forms in bringing positive change in more than 120 countries. My role with C4D lies in managing projects that strengthen communication for urban development, capacity building trainings, community mobilization, and national/global advocacy in different countries. Last year I managed a project for Syrian youth capacity building where 15 workshops in 5 Syrian cities carried out despite all the logistics difficulties in a conflict country. The success stories I received from these projects produced by the workshops showed the potential of positive outcomes of communication in overcoming conflicts and rebuilding sustainable communities that contribute in return to a healthy recovery.

Collaboration is the driver of all the work settings that I’m part of. I learnt this lesson throughout BUDD by working with international classmates with different background and experiences. We all believed in the experimental learning process of this program and that knowledge is not imported rather than produced and exported by us. Following this approach, I am working along with 30 other Syrian professionals from more than 10 EU countries to establish the Diaspora Network Alliance DNA. DNA is a collaborative space attempts to advocate for the Syrian refugees’ right to the city. on the same matter, I also participated with Guerilla Architects during Vienna Design Week in conducting a participatory workshop about the concept of home for newcomers and how their demands could be incorporated in national housing polices.

Overall, this programme has been really of life-changing experience. It expanded my horizon to some ideas I used to take for granted. It helped be to develop critical thinking via constant reflections we used to do after every single class. I am able due to this learning experience to always create my own narratives regarding everything I encounter everyday and not depending on others’ ones anymore.