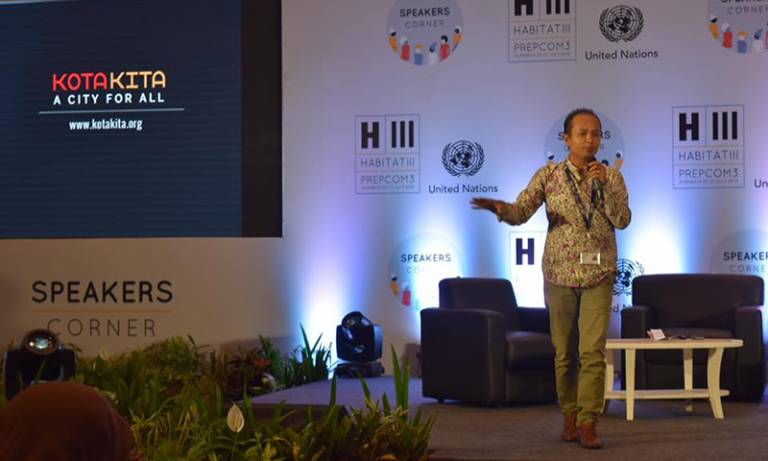 Ahmad Rifai completed his master degree at Social Development Practices, Development Planning Unit (DPU) University College London in 2014. He was a Chevening scholarship awardee from the UK government 2013/2014, and in 2016 became a finalist UK Alumni Award for social impact category.

He has more than 10 years experiences working in the urban sector related to community participation, civil society movements, urban informality, and urban poverty. Ahmad also has experiences working with several global institutions such as UN Habitat, UNDP and ILO.  In 2010 he established a foundation which he named Kota Kita which aims to facilitate a more inclusive urban development process in Indonesia.

Since returning from the UK in 2014, Ahmad received the mandate to become the director of Kota Kita Foundation and seeks to develop his organization to become a strong civil society organization that contributes to changes in both urban policy and civil society movement. He also seeks his foundation to actively engage in global urban agenda such as Sustainable Development Goals, and the New Urban Agenda.

Together with Kota Kita, he has developed many initiatives to help improve city governance, promote collaboration and partnerships in encouraging change and addressing urban issues such as slums, poverty, waste management, transport and climate change. His extensive works can be accessed at www.kotakita.org

Some of the initiatives he developed are as follows:

1. www.solokotakita.org Together with his colleague John Talyor, he introduced a mapping methodology of GIS-based cities in Solo City supported by Mayor Joko Widodo (who is now the President of the Republic of Indonesia). Mapping conducted participatory and mobilizing volunteers, succeeded in collecting the urban indicator which was then used to develop a participatory development plan at the urban village level in Solo. This methodology was also developed in several cities such as Banjarmasin, Pekalongan, Makassar, and Ulaanbatar in Mongolia.

2. Urban Citizenship Academy, an academy built to build awareness of activism in changing cities. The Academy provides groups that are active in the community to be able to analyze urban problems, mapping, advocacy strategies and mobilize campaigns and support for an environmental improvement program in the community.

3. www.urbansocialforum.or.id  The Urban Social Forum is an annual event that provides an open and inclusive space for exchanging of knowledge, debating ideas, and networking between civil society organizations, activists, academics, and students working on pressing urban issues. Ultimately, the Forum is a truly public and democratic space for people to put forward alternative ideas and imagine 'Another City is Possible!'. Since 2013 when it began, to the 5th USF in Bandung last year, the success of USF has indicated a strong spirit of collaboration and civil society movement on urban development in Indonesia.