The UCLG World Council took place virtually on 11-13 November 2020 and was hosted by the city of Guangzhou. 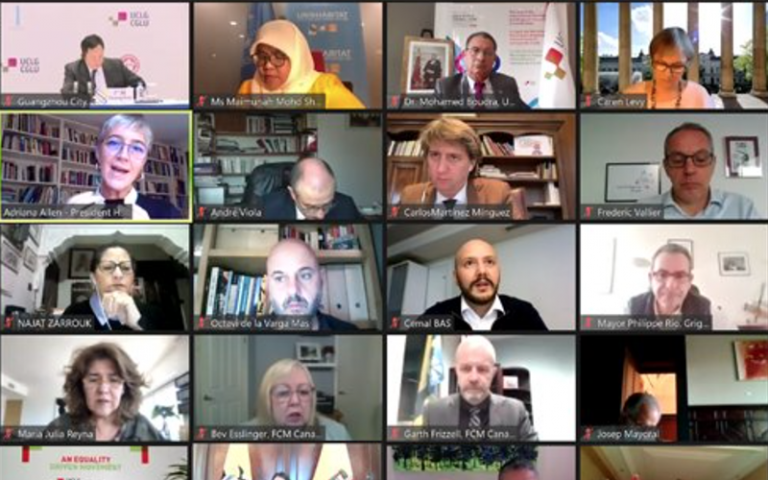 United Cities and Local Governments, UCLG, is an international non-profit organisation gathering local and regional governments from more than 140 countries with the objective to represent autonomous and democratic local governments on a global level, promoting their values, objectives and interests. As every year, UCLG held their World Council in 2020, which took place virtually on 11-13 November and was hosted by the city of Guangzhou. This gathering included a full week of meetings, coinciding with the anniversary of the UCLG leadership elections last year during their World Congress in Durban, South Africa in 2918 .

The DPU's Prof Caren Levy and Prof Adriana Allen participated during the session of the UCLG Executive Bureau, on 12th November. They contributed to the discussion focused on "Policy debate: Addressing inequalities, key in the post-COVID era". In their interventions, Prof Caren Levy and Prof Adriana Allen referred to the urgency of dealing with multiple inequalities exacerbated by COVID-19. They called for a renewed understanding of urban and territorial inequalities, and invited the participants to learn from concrete practices that build pathways to equality and address the structural causes of inequalities: a multistakeholder process for the pact for the future. This needs not only a new form of multilateralism, but also plurilateralism, building partnerships and a system of dialogue that recognise multiple knowledges and claims.

Their participation was part of the ongoing engagement between the the Knowledge in Action for Urban Equality (KNOW) programme, KNOW, and UCLG for the preparation of the next GOLD Report. GOLD VI will be co-produced by KNOW and will focus on Pathways to Urban and Territorial Equality. GOLD, the Global Observatory on Local Democracy and Decentralisation (GOLD), was created in 2006 to become “a major source of information on local self-government, local authorities and international solidarity”. KNOW and the UCLG Research team are working together through a methodology that seeks not only to produce a rigorous and relevant output addressing the role of local and regional governments in reducing inequalities, but also to facilitate a rich process – supporting and strengthening multi-stakeholder dialogues and ensuring the participation and involvement of UCLG members, civil society networks and researchers/academics.