The film, ‘Exploring mobilisation experiences for more equitable city-making’, examines the processes of knowledge production in the exchanges undertaken in Salvador and London. 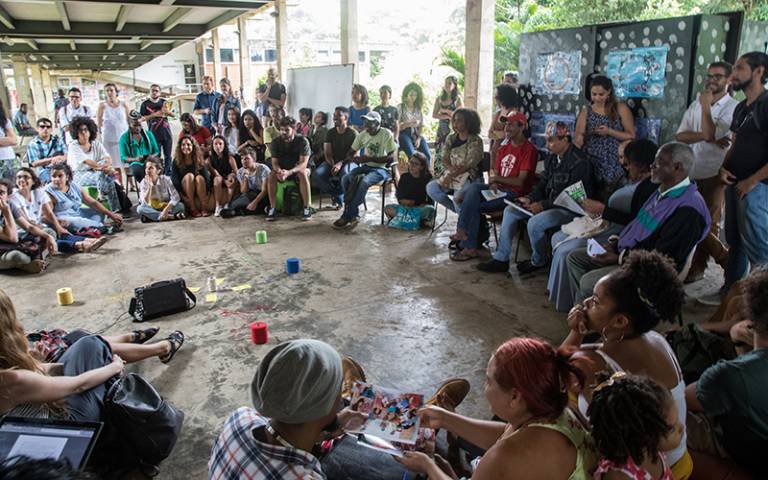 Between 2016-19 the MSc Social Development Practice overseas fieldwork project undertaken by students has been based in Salvador, Brazil, where the DPU have been partnering with the research group 'Lugar Comum' (Common Place) from the Faculty of Architecture at the Universidade Federal da Bahia (FAUFBA) to carry out an action learning initiative focusing on the documenting of collective practices claiming the right to the city in Salvador. The fieldwork project forms part of the programmes practice module, led by Alexandre Apsan Frediani.

In 2018, in addition to the fieldwork in Salvador, the DPU also facilitated a learning exchange in London titled ‘Exploring mobilisation experiences for more equitable city-making in Salvador and London’ which built on the partnership between the DPU and Lugar Comum. This exchange brought students, academics and representatives from social movements from Salvador to London to share their experiences and learn from the context of struggling for more equitable city-making in London.

The four-year learning exchange between DPU and Lugar Comum aimed to enable learning for the stakeholders involved – the students, staff and community representatives. As part of the process, a collaborative film titled ‘Exploring mobilisation experiences for more equitable city-making’ aimed to capture reflects about the pedagogical appoach implemented through this learning exchange.

The video, filmed and edited by DPU Media & Communications Officer, Alexander Macfarlane, and lecturer at the Faculty of Communication at UFBA, Bau Carvalho, considers the stakeholders that were involved in the exchanges, the ways in which research was undertaken, and what was learned.

The film was made possible through generous funding from The Bartlett Faculty.