This action-research programme consists of a series of initiatives aiming to explore the narratives that accompany processes of urban renewal in ‘decaying’ inner city areas in the global South. 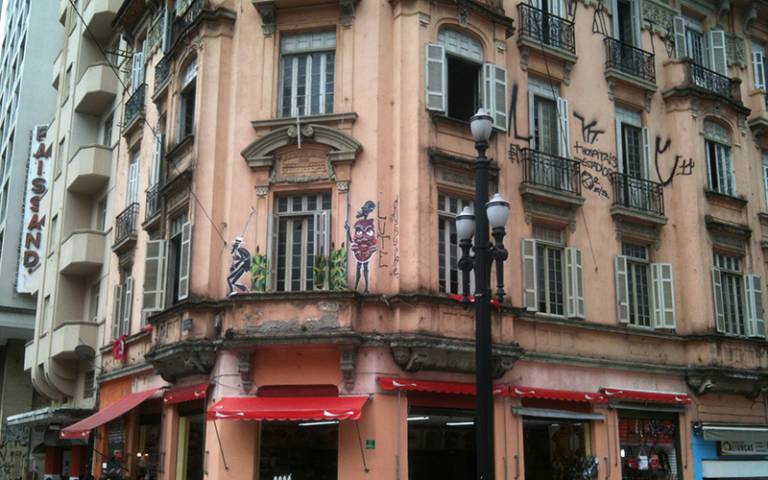 The action-research programme Insurgent Regeneration consists of a series of initiatives aiming to explore and critically examine the multiple narratives that accompany processes of urban renewal in ‘decaying’ inner city areas in the global South, where self-organised resident occupations are taking place.

As such, this research aims responds to two main challenges: the cyclical decay and deterioration of inner-city areas and their sustainable resurgence and adaptation; the housing crisis in cities of the global South, investigated in its relations to the informal occupation of vacant and deteriorating buildings and sites.

This research programme aims to bridge these typically disparately debated challenges. Whilst much is argued around the citizen-led emergence and transformation of ‘informal settlements’, there has been little focus on the self-organised reuse and revitalisation of buildings in declining urban neighbourhoods. Furthermore, there has been little consideration on how the ‘urban renaissance’ agenda engages in dialogue with such practices, and with the alternative visions of urban development that they convey.

The research sparks with a literature review of contemporary debates around urban regeneration and insurgent citizenship. It is then followed by a workshop with scholars and urban social movements in São Paulo, Brazil, enriched by a series of seminars with scholars and students working in the field from UCL.

This programme includes collaborations with the post-graduate programme in Planning and Territorial Management of the Universidade Federal do ABC and the União dos Movimentos de Moradia (UMM).

Funded by the Bartlett Visiting Research Fellows programme, Beatrice De Carli conducted a research aimed at generating baseline knowledge about the possible intersections between notions of ‘insurgent citizenship’ and ‘urban regeneration’, their potential conflicts and synergies, and their combined role in the refinement of wider concepts of inclusive and sustainable inner-city renewal. As such it considered how conflicting visions of urban change in decaying inner city areas are articulated by different domains of urban research, through a systemic exploration of literature and study cases that potentially interweave notions of ‘urban regeneration’ and ‘insurgent spatial practices’. The focus of attention was placed on the relationship between state-led regeneration agendas, and housing-oriented occupant practices in central urban areas in cities of the Global South.

(1) the interpretation of international definitions of ‘urban regeneration’ and ‘urban renewal’ in ‘insurgency’ literature, with a focus on the extent to which struggles of residents and housing social movements have been interpreted as agents of change in contexts where the pressures of state-led and/or market driven regeneration are most imminent.

(2) the extent to which scholarly research on urban regeneration is informed by international debates on ‘insurgent citizenship’ and ‘strategic action planning’; specifically, how present-day literature and experiences in the field of ‘urban regeneration’ address the frictions and disconnects between planned interventions and the needs and aspirations of local residents occupying ‘decaying’ buildings and sites.

(3) finally, to which degree visual mapping methodologies have been addressed as a means of enquiry within context of conflictive urban regeneration, to dig and expose: competing definitions of urban change (‘mapping discourses’), their multiple spatial articulations (‘mapping spatialities’), and the forms of their visual representation (‘mapping maps’).

The final outcomes from this work were shared through a Bartlett Research Exchange event in March 2014.

The research was supported by the Bartlett Visiting Research Fellowsprogramme  and was conducted with the support of Adriana Allen (The Bartlett Development Planning Unit) and Ben Campkin (The Bartlett School of Architecture and UCL Urban Laboratory).