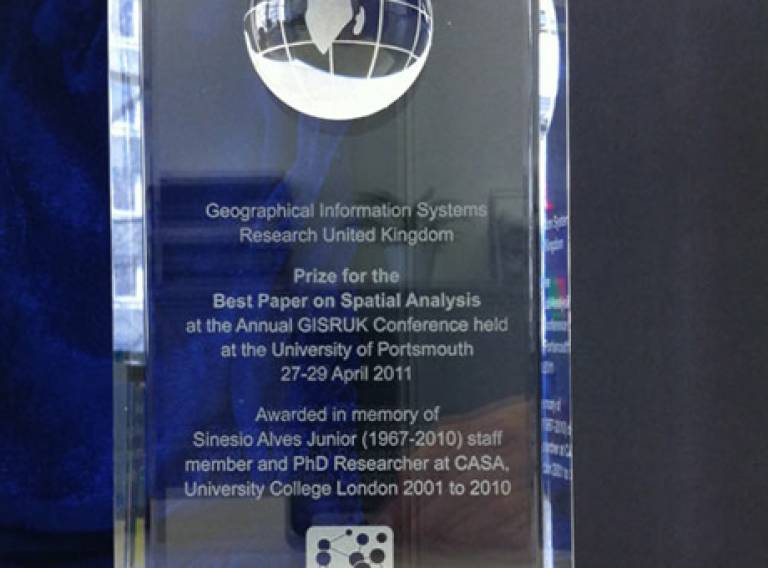 CASA has sponsored an award to be presented at the annual GISRUK conference for the best paper in Spatial Analysis to remember Sinesio Alves Junior. The first award was presented at the recent meeting in UCL.

Junior as he was affectionately known, was a PhD researcher and staff member (systems admin) in CASA for nine years (2001 to 2010). He worked on several projects in his early days with us, particularly the ESRC NeXSuS Project led by Peter Allen from Cranfield, and in 2007-2008 he acted as our systems administrator. He was just returning to Brazil in mid-2008 to take a job at INPE when diagnosed with brain cancer. Life is never fair. He and his wife Mariane had everything to look forward to as they were expecting their first child, Ricardo, who was born in late 2008. Junior at least was able to support his family until his untimely death earlier this year.

We will honour Junior's memory at GISRUK with an annual prize for the best paper on Spatial Analysis and this was presented last week for a paper by Didier Leibovici, Lucy Bastin, Suchith Anand, Jerry Swan, Gobe Hobona and Mike Jackson from the University of Nottingham’s Centre for Geospatial Science. The paper was entitled 'Spatially Clustered Associations in Health GIS' and it is appropriate that Junior also worked on geodemographics and the morphology of clustering while he was in CASA.