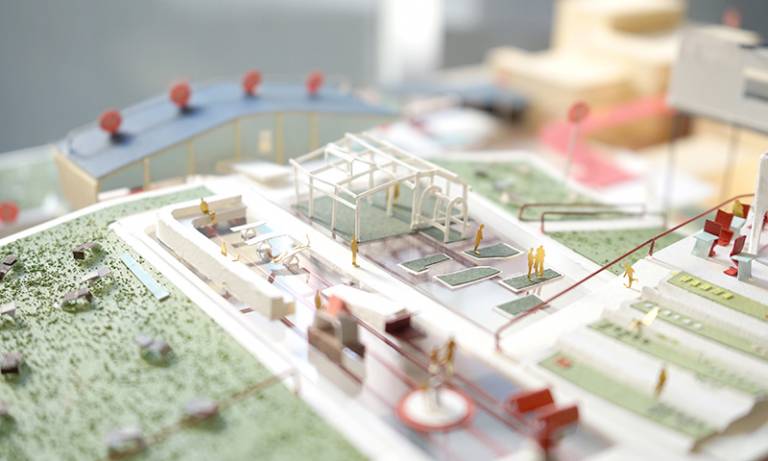 A collaborative project between students Max Shen (The Bartlett School of Architecture) and Chloe Ong (The Slade School of Fine Art) has won first prize in the Shelter International Design Competition. Their project, entitled ‘City Farm of the Future’, was announced as the winner following a final jury decision at the Tokyo International Forum.

The winning proposal was a model for an alternative city farm, in which stepped green roofs would not only offer a space for plants and animals, but would also function as a playscape and market.

The pair’s central concept of providing everyone with a space for rest, play, food and education aligns with the work of the School's Unit 6, one of the Architecture BSc Design Units, which has been examining the needs of the East London community. It was also particularly important to the students that the majority of their project was made or drawn by hand, leading to a playful set of drawings and models.

In response to being awarded first place, Max Shen said:

We are really honoured to be awarded this prize and it is a privilege to share our ideas on the other side of the world. I would like to thank my tutors, Paolo Zaide and Tim Norman, for their crucial guidance in the development of the project.

The Shelter Corporation’s aim is to encourage a new generation of architects to develop sustainable buildings with excellent functionality and design. Their design competition invites ambitious students from all over the world to discuss their designs with a jury of world-class architects.

In 2017, the theme of the competition was ‘The Reconstruction of Commons today’. The competition aims to re-establish in cities community-managed land, or ‘commons’, that have disappeared from all but the most rural regions. Participants were encouraged to create commons that engage people within the urban context and to consider how shared resources can be managed and accessed in the city.