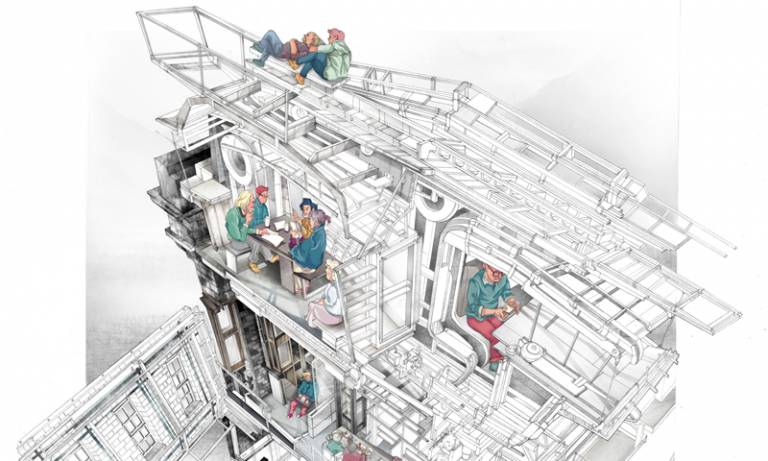 Xin Hao (Jerome) Ng, who completed his Part 1 degree at The Bartlett in 2016, has been awarded the Jury prize in the ‘Concepts: Architecture +Models & Rendering’ category for his project ‘Memento Mori: A Peckham Hospice Care Home’. The project was up against entries from over 100 countries in the Architizer A+Awards 2017.

Situated in a Grade II-listed building, the Peckham Hospice Care Home project enables its residents to live the remainder of their lives to the full. Each unit offers views of the garden through the use of periscopes and movable façades and includes an additional room for family members.

The project was created while Jerome was a BSc Architecture Year 3 student at The Bartlett School of Architecture and was exhibited at the Summer Show 2016. Jerome was part of UG6, where he was taught by Christine Hawley and Paolo Zaide. Currently on his year out, Jerome will be returning to The Bartlett in the next academic year for the MArch Architecture Part 2 programme.

Launched in 2012, the Architizer A+Awards celebrate the year’s best architecture and products. Entries are judged by more than 400 luminaries and thought-leaders from the fields of fashion, publishing, product design, real estate development and tech. This year's winners were announced on 11 April 2017.

As well as Jerome Ng, another Bartlett student has also been successful in the Architizer A+Awards 2017: Eva Sopeoglou has won the popular award in the Architecture +Light category for her Summer House in Halkidiki project in Greece.