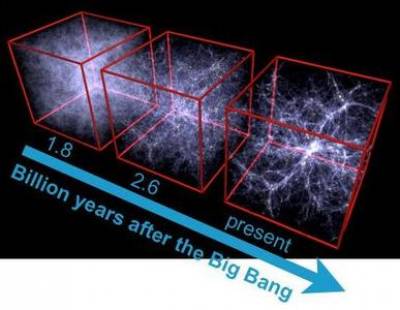 According to currently favored models of galaxy formation, massive galaxies are thought to attain their masses through a biased hierarchical build-up within a ΛCDM cosmology. We would expect, therefore, HzRGs to reside in the most over-dense regions of the early Universe, and to provide powerful test-cases of the biased growth of cosmic structures during the formative stages of the most massive galaxies. In fact, a number of the most luminous HzRGs have been found to be associated with over densities of sources selected at optical, sub-millimetre, and X-ray wavelengths (e.g., Stevens et al. 2003; De Breuck et al. 2003; Greve et al. 2007; Humprey et al. 2011).

This project will carry out a systematic study of the large-scale environments of ten HzRGs at redshifts ~2.5 and ~3.5, corresponding to about 2.6 and 1.8 billion years after the Big Bang, respectively. Using the submillimeter camera SCUBA-2 (observing at 450 and 850micron) on the James Clerk Maxwell Telescope in Hawaii, we have obtained uniform maps of a 15’ x 15’ region around each HzRG. This corresponds to a co-moving area of about 7Mpc x 7Mpc, which is sufficiently large to encompass the whole of the expected proto-cluster environment. 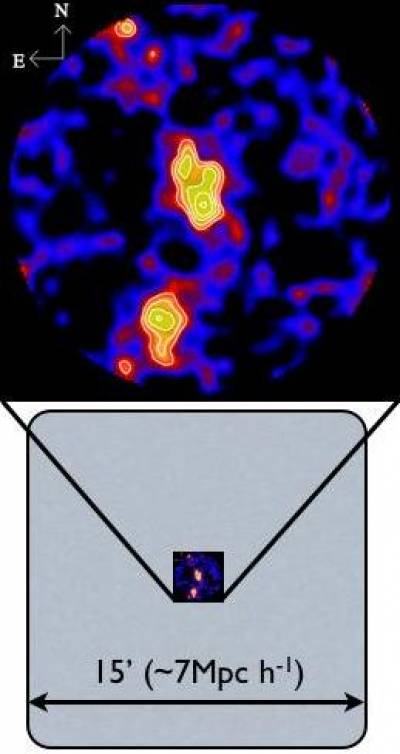 The primary scientific goal of this project is first and foremost to identify dusty star forming galaxies (DSFGs) within the SCUBA-2 maps, and thus measure the over-density of such objects associated with the HzRGs. Secondly, we will perform a statistical comparison of the average amplitude of the overdensity at these two epoch, and contrast it with predictions from cosmological simulations of structure growth and evolution.

We plan interferometric observations of our discovered sources with the Atacama Large Millimeter/sub-millimeter Array (ALMA) in Chile in order to illucidate the detailed properties of their dust and gas content, including their spatially resolved gas kinematics, as well as the sizes and masses of the galaxies.

Finally, we hope to push our surevey to higher (z~4) and lower (z~1.5) redshifts in order to increase the baseline over which we can delineate the growth and evolution in DSFG over-density around radio galaxies.