Half of the energy produced since recombination has been absorbed and reemitted by dust. This radiation is produced primarily by dusty, star-forming galaxies at z~1-3, with a tail extending beyond z>6. These objects were first identified in submillimetre/millimetre wavelengths surveys of the extragalactic sky and found to be orders of magnitude more abundant in the early Universe than the present day.  These studies upended our view of cosmic star formation, demonstrating that the bulk of star formation activity in the Universe probably occurs in dusty galaxies that were invisible in optical and ultraviolet surveys due to dust obscuration.

The South Pole Telescope (SPT) has identified the brightest high-redshift millimetre sources in the extragalactic sky (Vieira et al. 2010), and assembled a sample of ~100 strongly lensed, dusty, starburst galaxies. We are undertaking a comprehensive and systematic followup campaign with ALMA and HST to use these "cosmic magnifying glasses'' to provide a highly detailed view of the gas and dust and the star formation in these objects.

One of the SPT sources was recently discovered to be at z=6.9 (Marrone et al. 2018, Nature), which makes it the most distant known massive starburst, and demonstrates that  large reservoirs of molecular gas and dust can be present in massive galaxies near the end of the epoch of cosmic reionization. 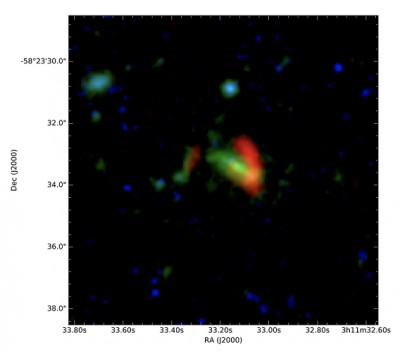 Figure 1: SPT0311–58 at z=6.9 is one of the most distant massive starburst galaxy known to date. Here imaged with ALMA at 1.3mm (red), the HST in optical (green) and near-IR (blue) light. This galaxy is caught in a major merger during its formation (Marrone et al. 2018, Nature).

At UCL we are leading ALMA efforts to determine the fraction of dense gas in these galaxies via ALMA observations of various spectral lines (HCN, CO, CI, and H2O) and using radiative transfer models to characterise the physica conditions of their interstellar medium. Among the questions we seek answers to with this project are: "Are massive galaxies in the early Universe particularly efficient at forming stars?" and "What governs the star formation in the most distant starburst galaxies?". 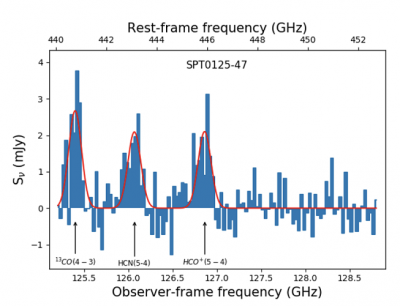 Figure 2: First results from a pilot survey of the dense gas in SPT galaxies (Bethermin, Greve, et al. 2018) using dense gas tracer lines of HCN and HCO+. We will expand this survey to dozens of galaxies.