The European Space Agency (ESA) has formally adopted Ariel, a mission led by our very own Head of Group - Prof. Giovanna Tinetti and other UCL scientists that is dedicated to studying the nature, formation and evolution of planets outside our solar system. 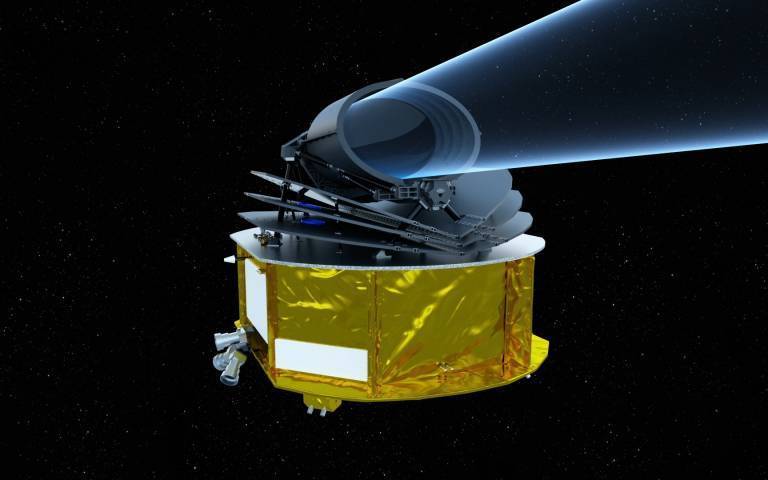 Ariel (Atmospheric Remote-sensing Infrared Exoplanet Large-survey), scheduled for launch in 2029, will survey about 1,000 exoplanets in its lifetime, ranging from super-Earths to Jupiter- and Neptune-sized planets, with a particular focus on hot planets orbiting close to their star.

More than 50 institutes from 17 countries have been working over the past five years to develop the science goals and design the instrumentation which will enable Ariel to survey a diverse sample of exoplanets.

The mission has passed a rigorous set of reviews which it has been undergoing throughout 2020 to prove the technical feasibility and science case and has now received approval from ESA’s member states.

As well as UCL, other UK institutions have provided the leadership and planning for Ariel, including the Science and Technology Facilities Council’s (STFC) RAL Space, Technology Department and UK Astronomy Technology Centre, Cardiff University and the University of Oxford. UK contributions are funded by the UK Space Agency.

Ariel's Principal Investigator, our Head of Group - Professor Giovanna Tinetti said: “We are the first generation capable of studying planets around other stars. Ariel will seize this unique opportunity and reveal the nature and history of hundreds of diverse worlds in our galaxy. We can now embark on the next stage of our work to make this mission a reality."

By looking specifically at hot planets, scientists are expecting to build an understanding of the formation of planets and their evolution. At hotter temperature, which in some cases it can be more than 2000’C, a greater number of exotic molecules will be visible to Ariel. The instruments will then be able to determine what the atmospheres are made up of and provide scientists a unique insight into the planet’s internal composition and the formation history of the planetary system

The Ariel team is taking a very open approach providing rapid access to data and even encouraging enthusiasts to help select targets and characterise stars. Much of the data will be available to both the science community and general public immediately.

Ariel will have a meter-class telescope primary mirror to collect visible and infrared light from distant star systems. An infrared spectrometer will spread the light into a ‘rainbow’ and extract the chemical fingerprints of gases in the planets’ atmospheres, which become embedded in starlight when a planet passes in front or behind the star. A photometer, a spectrometer and guidance system will capture information on the presence on clouds in the atmospheres of the exoplanets and will allow the spacecraft to point to the target star with high stability and precision.

The Ariel Consortium Project Manager, Paul Eccleston, of STFC RAL Space, said: “This represents the culmination of lots of preparatory work by our teams across the world over the last five years in order to demonstrate the feasibility and readiness of the payload. We now go full speed ahead to fully develop the design and start building prototypes of the instrumentation on the spacecraft.”

The Ariel mission consortium teams from across Europe will now move on to build and prototype their designs for the payload of Ariel and plan for receiving and processing the data. The industrial contractor for the spacecraft bus, which will support the payload coming from the nationally funded consortium teams, will be selected in the summer 2021.

Further information about the space mission can be found here.