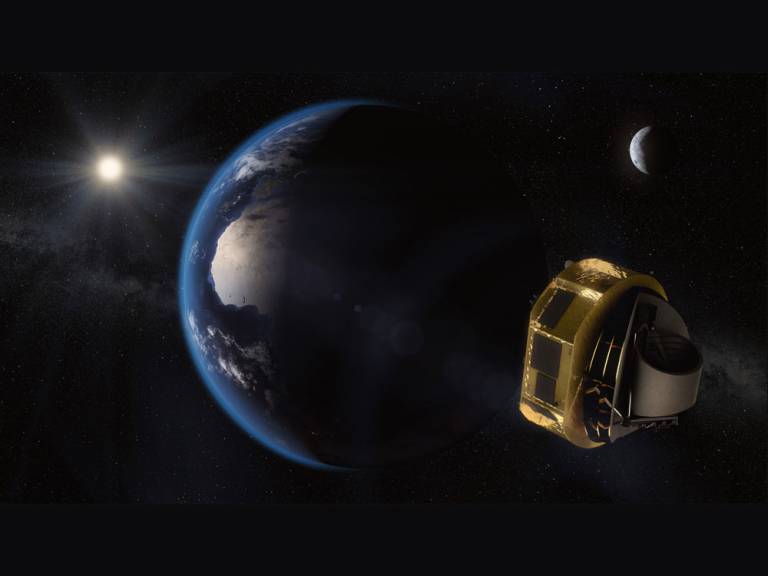 UCL is leading a multi-million pound European mission to study newly discovered planets after it was selected today as the next European Space Agency science mission.

ARIEL (Atmospheric Remote-sensing Infrared Exoplanet Large-survey), due for launch in mid-2028, will answer fundamental questions about how planetary systems form and evolve.

During a 4-year mission, ARIEL will observe 1000 planets orbiting distant stars and make the first large-scale survey of the chemistry of exoplanet atmospheres. ESA's Science Programme Committee announced the selection of ARIEL from three candidate missions on 20th March 2018.

The ARIEL mission has been developed by a consortium of more than 60 institutes from 15 ESA member state countries, including UK, France, Italy, Poland, Spain, the Netherlands, Belgium, Austria, Denmark, Ireland, Hungary, Sweden, Czech Republic, Germany, Portugal, with an additional contribution from NASA in the USA currently under study.

UK institutions have provided the leadership and planning for ARIEL, including UCL, STFC RAL Space, STFC UK ATC, Cardiff University and the University of Oxford. UCL's contribution to the mission is funded by the UK Space Agency.

ARIEL's Principal Investigator, Professor Giovanna Tinetti (UCL Physics & Astronomy) said, "Although we've now discovered around 3800 planets orbiting other stars, the nature of these exoplanets remains largely mysterious. ARIEL will study a statistically large sample of exoplanets to give us a truly representative picture of what these planets are like. This will enable us to answer questions about how the chemistry of a planet links to the environment in which it forms, and how its birth and evolution are affected by its parent star."

ARIEL will study a diverse population of exoplanets ranging from Jupiter- and Neptune-size planets down to super-Earths, in a wide variety of environments. While some of the planets may be in the habitable zones of their stars, the main focus of the mission will be on warm and hot planets in orbits close to their star.

Warm and hot exoplanets represent a natural laboratory in which to study the chemistry and formation of planets. High temperatures keep different molecular species circulating throughout the atmosphere and prevent them from sinking or forming cloud layers, where they can become hidden from remote detection.

The scorching temperatures experienced by planets close to their stars, which can be at temperatures in excess of 2000 degrees Celsius, also mean that more molecules from the planet's interior make their way into the atmosphere. This provides ARIEL with better information about the planet's internal composition and the formation history of the planetary system.

ARIEL will have a meter-class telescope primary mirror to collect visible and infrared light from distant star systems. A spectrometer will spread the light into a 'rainbow' and extract the chemical fingerprints of gases in the planets' atmospheres, which become embedded in starlight when a planet passes in front or behind the star.

A photometer and guidance system will capture information on the presence on clouds in the atmospheres of the exoplanets and will allow the spacecraft to point to the target star with high stability and precision.

The payload for ARIEL will be amongst the first to be assembled and tested at the STFC RAL Space National Satellite Test Facility, due to be open in mid-2020 following £99 million investment as part of the UK Government's Industrial Strategy Challenge Fund.

ARIEL will be launched from Kourou in French Guiana and will be placed in orbit around the Lagrange Point 2 (L2), a gravitational balance point 1.5 million kilometres beyond the Earth's orbit around the Sun. Here, the spacecraft is shielded from the Sun and has a clear view of the whole sky to maximise the possible target exoplanets for observations.

The ARIEL Consortium Project Manager, Paul Eccleston, of STFC RAL Space said "It is wonderful news that ESA have selected ARIEL for the next medium class science mission. The team are very excited to have the opportunity to realise the mission we've been developing for the last two years. ARIEL will revolutionise our understanding of how planetary systems form and evolve, helping us put our own solar system into context and compare it to our neighbours in the galaxy."