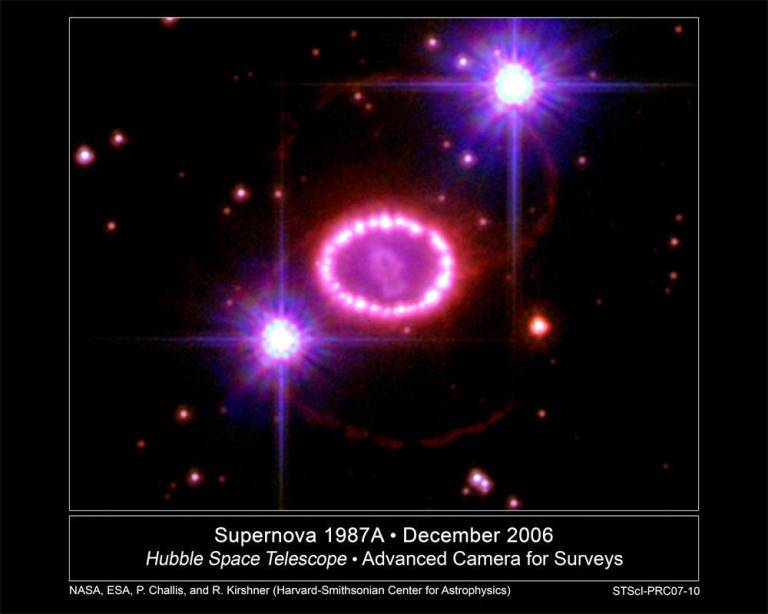 Super-Freezer Supernove 1987A is a dust factory RAS Press Release

Surprisingly low temperatures detected in the remnant of the supernova 1987A may explain the mystery of why space is so abundant with dust grains and molecules. The results will be presented by Dr Mikako Matsuura at the National Astronomy Meeting 2013 in St Andrews on Friday 5 July.

In 1987, an explosion of a massive star was detected in our neighbouring galaxy, the Large Magellanic Cloud, just 170,000 light years away. This supernova, dubbed 1987A, released approximately thousand million times more energy than that emitted by the Sun in one year.  Twenty five years later, an international team of astronomers has used the Herschel Space Observatory and Atacama Millimeter and Submillimeter Array (ALMA) to study the supernova remnant.  They found a vast reservoir of unexpectedly cold molecules and dust.

"The powerful explosion we saw in 1987 scattered elements made by star into space in the form of a very hot plasma. The gas has now cooled down to temperatures between -250 to -170 degrees Celsius. That's surprisingly cold, comparable to the icy surface of Pluto at the edge of our Solar System. The gas has formed molecules and some has even condensed into solid grains of dust. The supernova has now become a super freezer!" said Dr Matsuura.

The Herschel observations show that the supernova produced dust and solid material equal to about 250 000 times the mass of the Earth, or three quarters of the mass of the Sun.  To date, scientists have believed that supernova remnants contain only very energetic atomic gas, detectable at optical X-ray wavelengths; the new observations show that this is not the case. The discovery of such a large mass of dust should help us to understand how supernovae slowly spread and fill galaxies with gas, dust and small rocky particles, some of which may eventually end up in the next generation of stars and planets. "We were surprised by the amount of dust and molecular gas in the reservoir created by the supernova 1987A. The ALMA and Herschel observations show that the reservoir contains carbon monoxide molecules equalling one tenth of the mass of the Sun. Herschel shows that the dust mass was even larger - about half the solar mass!" said Dr Matsuura. "We don't get many opportunities to study supernova. These events are very rare and the majority was found in very distant galaxies.  Even with relatively close ones, like 1987A, it's difficult - although they are very bright at the time of the explosion, the light from the supernovae fades very quickly making it very difficult to observe them a few years after the explosion," said Dr Matsuura.  "Carl Sagan once said that: 'We are all made of star-stuff'.  These results will help us understand how that material reached us!"

The international team includes: Mikako Matsuura and M.J. Barlow of University College London, Maarten Baes of Universiteit Gent, Eli Dwek of NASA Goddard, Margaret Meixner of the Space Telescope Science Institute, J. Kamenetzky and R. McCray of the University of Colorado at Boulder and R. Indebetouw of the University of Virginia. ALMA, an international astronomy facility, is a partnership of Europe, North America and East Asia in cooperation with the Republic of Chile. ALMA construction and operations are led on behalf of Europe by ESO, on behalf of North America by the National Radio Astronomy Observatory (NRAO), and on behalf of East Asia by the National Astronomical Observatory of Japan (NAOJ). The Joint ALMA Observatory (JAO) provides the unified leadership and management of the construction, commissioning and operation of ALMA.

Herschel is an ESA space observatory with science instruments provided by European-led Principal Investigator consortia and with important participation from NASA.