Investigating the lives of those who lived and died in Pembrokeshire during the early medieval period. 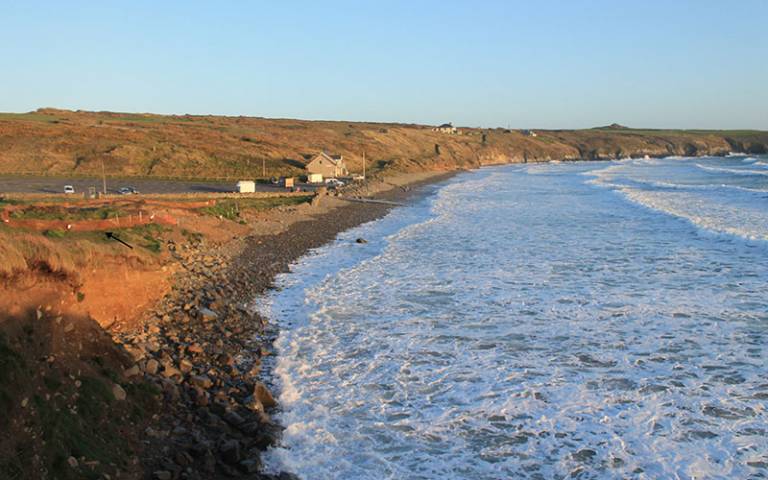 Immediately north of Traeth Mawr (Whitesands Bay) in the parish of St Davids, Pembrokeshire is a mound of wind-blown sand and a strip of rough ground known as Parc y Capel (Chapel Field). Beneath this mound is St Patrick’s Chapel and an associated early medieval cemetery.

The site was known historically and previous excavations took place in the 20th century; in 1924, excavation by Badger and Green revealed the walls of a small, stone-built chapel. The site’s location on the edge of the dunes means it is particularly vulnerable to coastal erosion, and the severe storms of 2013-14 exposed a number of burials on the seaward-edge. As such, the decision was made to excavate this important, yet vulnerable, site.

With financial support from Cadw and the EU, and an army of volunteers, excavation has taken place at the site since 2014 as part of a collaborative project between Katie Hemer (UCL Institute of Archaeology), Dyfed Archaeological Trust, and the Pembrokeshire Coast National Park Authority.

Beneath the later medieval chapel is a substantial early medieval cemetery dating from the 8th-12th centuries AD; it represents one of the largest burial sites of this period with over 200 burials excavated to date. In keeping with Christian tradition, no grave goods were used, and most burials were aligned east-west (head to the west). Burials include stone-lined cists and occasionally cross-incised grave markers. The population consists of men, women and children - a significant number of whom died very young. Ongoing bioarchaeological analyses of the skeletal remains includes osteology, stable isotope analysis, and aDNA analysis; the aim is to explore questions about kinship, migration, diet, health, and disease. Doing so will help us to better understand the lives of those who lived and died in Pembrokeshire during the early medieval period.