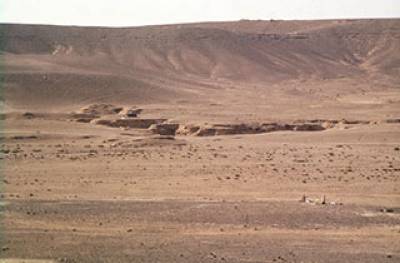 The Azraq Basin is an extensive inland drainage system lying in the steppe and desert to the east of Amman. The basin covers over 12,000 sq km, stretching from the lava peaks of Jebel Druze in southern Syria to the Wadi Sirhan in northern Saudi Arabia. The Azraq oases lie at its centre and were formed around copious springs and an extensive playa lake which fills after winter storms. In recent times the oases provided a seasonal home for nomadic camel, sheep and goat pastoralists as well as a sanctuary for wildlife and migrating birds. Small-scale irrigation farming was practiced around the villages. Over the last thirty years considerable changes have occurred, as Azraq has become a major crossroads on the overland routes to Iraq and Saudi Arabia, and much of its perennial water supply has been diverted to supply the urban centres of northern Jordan.

Between 1982 and 1989, and whilst Director of the British Institute at Amman, I initiated a multi-disciplinary project to investigate the environmental history of the region through the late glacial and early post-glacial periods, and its use by late Palaeolithic hunter-gatherers and by Neolithic communities. A particular interest was in the extent to which this area lying at the present fringes of the "Fertile Crescent" was involved in the beginnings of farming. Following two survey seasons, in which over 100 prehistoric sites were recorded, research focussed on three areas around the central oases (Azraq Shishan, Wadi Uwaynid and Ain el Beidha) and on the Wadi Jilat, which lies in a present transition area between steppe and desert about 55 km to the south-west of Azraq. At the present day, the Wadi Jilat also serves as a small-scale seasonal "oasis" after winter storms, as it contains a rocky ravine where water collects and is available through until the late spring or early summer.

During the course of the investigations, 18 late Palaeolithic and Neolithic sites were the subject of small-scale archaeological excavations. The sites ranged in date from 30,000 to 7,500 BP (all dates in calibrated years) covering the period from the coolest stage of the last glaciation, until one of the warmest stages of the present interglacial. Subsequently, broader area excavations were undertaken at five of the Neolithic sites dating to the last three millennia of this time period. A substantial number of people were involved in the excavations and the analysis of finds, and over the years over 40 publications have appeared on various aspects of the work, including several PhD and Master's dissertations.

Ten of the excavated sites dated to various stages of the late Upper Palaeolithic and Epipalaeolithic (30-12,000 BP) and several had multiple phases of occupation. Although a number of these probably represented the residue of short-term hunting camps, several were of significant size, and in particular Wadi Jilat 6, whose eroded surface was covered with a canopy of over 18,000 sq m of flint artifacts. This site whose surface levels date to between 19-20,000 BP seems likely to have served as a seasonal aggregation centre or substantial base-camp for a hunting and gathering community, and traces were found of the ochre-pigmented floors of what may have been a structure. Only one other hunter-gatherer camp of this scale is known from this time period in the Near East, and this is from Wadi Kharaneh about 30 km to the north of Jilat. This site was initially excavated by Mujahed Muheisen (Yarmuk University) but is currently being reinvestigated by Lisa Maher (Cambridge). The analysis of the animal remains from both these sites by Louise Martin (UCL) and myself has demonstrated that up to 80% of the hunted fauna was gazelle, but that species such as onager, hare, tortoise and bird were also well represented.

The latest of the Epipalaeolithic sites investigated was Azraq 18 which was located in the vicinity of the Azraq marshes. Excavations at this Natufian site (probably dating to between 13-14,000 BP), revealed a cluster of human burials representing 3 adults and the remains of 6 children of various ages from a young baby to an adolescent. Recent analysis of the remains by Fanny Bocquentin (CNRS, Paris) has shown that two of the adults had ochre pigment applied to their skulls. This is possibly the earliest example of this practice in the Near Eastern record. The fauna from this site was also slightly different from that described from earlier periods with a high proportion of wild cattle as well as gazelle and onager bones. Wild cattle would probably have inhabited the marshland as feral water buffalo did in the recent past.

Eight of the sites excavated were of Neolithic age ranging in date between 11,000 and 7,500 BP. This included five sites in Wadi Jilat and Azraq which were the focus of broader-area excavations. The Neolithic sites were very small-scale in comparison with the early farming villages in more fertile areas to the west and were probably seasonally occupied. There has been much debate over whether this was by groups from the farming communities to the west, or whether they were occupied by separate mobile groups who spent much of their year in the steppe, but who potentially had trading or exchange relationships with groups in the main farming areas.

Each of the settlements contained simple pit dwellings, mostly oval or circular with upright stone slabs creating the outer wall. Most had internal partitions and traces of hearths, and the roofing was probably made of perishable materials. Many of the ground-stone food processing tools were lightweight and portable further supporting the idea of a mobile community. Small stone figurines were found in several of the dwellings, and there was also much evidence of a stone bead making industry, utilising the green and red Dabba marble found to the immediate west of the Wadi Jilat. Katherine Wright (UCL) has made a detailed study of the beads and their manufacture and there is evidence that they were used or traded over quite an extensive area from the Jordan Valley to the easternmost part of Jordan.

There has been much interest in the subsistence of these groups and their potential use of domestic plants and animals. Sue Colledge (UCL) has identified very small quantities of domestic type barley and wheat in levels dating back as early as 10,500-9,500 BP, but there remains a question as to whether these were grown locally or imported from communities to the west. Domestic sheep and goat start to appear in the area at about 9,000 BP, which is several hundred years after the first evidence of their domestication within more fertile areas of the Levant. The reasons behind the introduction of livestock are unclear, but they could have served as a risk buffer for populations living in a marginal environment, and it might also be linked to the beginnings of dairying, although this has yet to be demonstrated. Whatever the background, the subsistence strategy of the steppic populations continued to be based on multiple alternatives which included hunting, trapping, small-scale herding, plant gathering and possibly limited cultivation. Research undertaken around the arid fringes of the southern Levant by Steven Rosen and others, suggests that larger-scale pastoral nomadism based on sheep and goat started to develop in the Early Bronze Age and camel pastoralism towards the end of the second millennium BC.

I am very grateful to the Department of Antiquities in Jordan who gave permission for this field research and to the British Academy, British Institute at Amman and the CBRL for their support. I am also extremely grateful to the various members of the team and especially to Douglas Baird, Brian Byrd, Sue Colledge, Christopher Hunt, Louise Martin and Katherine Wright who have undertaken so much of the analysis.