Do bones and teeth found by UCL Institute of Archaeology researchers at Boxgrove in Sussex share characteristics with Neanderthal fossils from northern Spain? A new study involving researchers from the UCL Institute of Archaeology and the Natural History Museum, London, together with Spanish colleagues, explores the complex identity of ancient Britons by examining fossil remains from Boxgrove in Sussex and the site, La Sima de los Huesos (the Pit of Bones), near Burgos in northern Spain. Their results have recently been published in the Journal of Human Evolution.

Initial analysis of the Boxgrove remains suggested the bones belonged to the species Homo heidelbergensis, who were originally thought to have evolved in Africa before spreading into Europe. However, it has also been suggested that the inhabitants of Boxgrove may have belonged to a group of early Neanderthals, a species that originated in Eurasia, and established itself there for the next 400,000 years until dislodged by Homo sapiens.

The extensive fossil remains at La Sima (bones and DNA evidence) indicate that these were early Neanderthals. Given the relatively close chronology with the Boxgrove remains, these were now carefully compared to try and definitively confirm the species of the Boxgrove inhabitants.

According to Matthew Pope:

“We hoped to find that together the bones and teeth would tell us these were the same species or demonstrate they were quite separate.”

However neither possibility seems to be the case as the dental remains appear to be very similar while the leg bones are not. Further research is now needed! 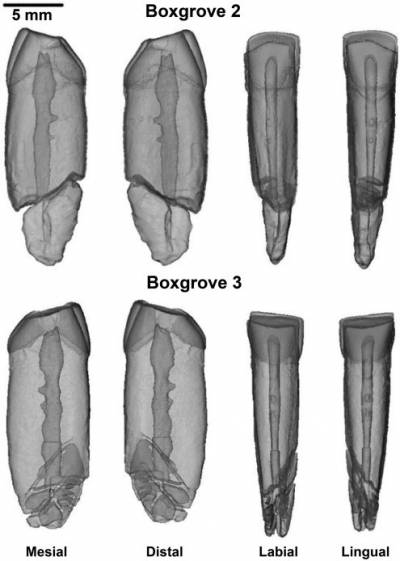 “This study brings at least some of the Boxgrove people much closer to early Neanderthal populations of La Sima than we had imagined. We now need to understand why the tibia looks so different. We also need to consider whether we could have more than one population represented in the Boxgrove sequence. Either way, there are exciting discoveries to be made.”