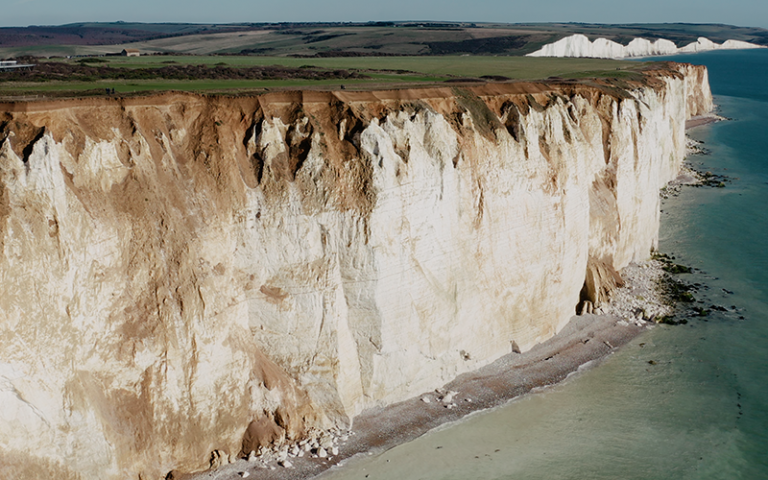 The pilot study at Seaford Head in East Sussex, undertaken by researchers from Archaeology South-East (ASE), aimed to investigate how an archaeological site at risk from climate change accelerated coastal erosion can be rapidly recorded and communicated to the public before it is lost.

The site of Seaford Head includes an Iron Age hillfort and provides the iconic view of the Seven Sisters cliffs. The area has seen significant cliff collapses in recent years, and erosion is expected to increase in frequency and severity with predicted rises in rainfall and storm events related to climate change.

ASE researchers undertook a desk-based assessment, a geophysical survey, and a topographic and drone survey. Drones were used to take hundreds of photographs of the site, which were then rectified using photogrammetry into highly accurate images and a topographic model, augmented with handheld survey equipment. The drones enabled the researchers to photograph and record otherwise inaccessible places, allowing the team to identify potential archaeological features in the 80m high cliff section.

“The detail of the archaeological features uncovered by the cliff photogrammetry is amazing and the anomalies identified by the geophysical survey provide targets for future investigation of the site we didn’t have before.”

A video and podcast discussion were released recently to communicate the results of the Seaford Head project, highlighting the issue of potential loss of sites such as this due to climate change accelerated coastal erosion. This pilot project was funded by English Heritage, and the films and podcasts were funded by the South Downs National Park Authority.

“A key element of the Seaford Head Project is that it aims to be a replicable study that other communities and heritage practitioners can apply to their own at-risk heritage to inform future management decisions."