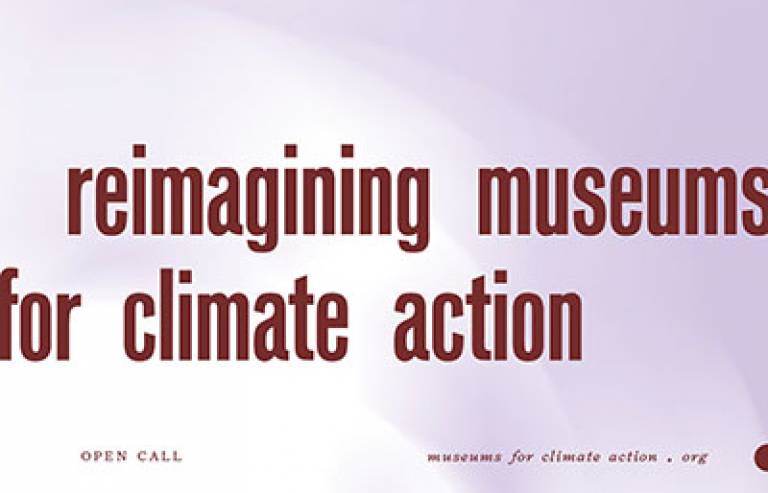 Reimagining Museums for Climate Action is an international design and ideas competition which was launched on 18 May 2020 for International Museum Day. The competition, which closed on the 15 September, challenged designers, architects, academics, artists, poets, philosophers, museum professionals and the public at large to radically (re)imagine and (re)design the museum as an institution, to help bring about more equitable and sustainable futures in the climate change era.

The AHRC Heritage Priority Area takes an expansive view of heritage, and aims to encourage and stimulate work that highlights intersections between natural and cultural heritage, and key global challenges. Work on the design competition was undertaken in partnership with Colin as part of his own AHRC-funded leadership fellowship project New Trajectories in Curatorial Experience Design, and Henry, founder of Curating Tomorrow, a consultancy which aims to help maximise the contribution that museums, the heritage sector and other organisations and sectors make to support a thriving society, economy and environment.

The competition attracted significant international attention, with 264 submissions from 48 countries. Entries were judged by an international panel of museum, architecture and design, climate change, heritage and sustainability experts who were impressed with the creativity and originality of the submissions.

The winners - eight successful teams - each receive £2,500 to develop their ideas into exhibits, which will be displayed at Glasgow Science Centre ahead of and during COP26, the United Nations Climate Change conference. COP26 is due to take place at the Scottish Event Campus in November 2021. Glasgow Science Centre, which is situated next to the SEC, will be playing a key role in the conference.

The exhibition will be accompanied by talks, workshops and other activities encouraging debate around the future role of museums and heritage in times of rapid environmental change.

the number, range and quality of the proposals we received far exceeded our hopes and expectations. The response to the competition shows how significantly the need to transform our institutions for climate action is viewed by the public, and the hopes for museums to participate in a range of different ways in this transformation. We are excited to begin working with the competition winners and Glasgow Science Centre to develop our exhibition in advance of COP26 next year".