A new analytical method has solved an old mystery - the origin of the large quantities of Roman colourless and clear glass, which was particularly favoured for high-quality drinking vessels. 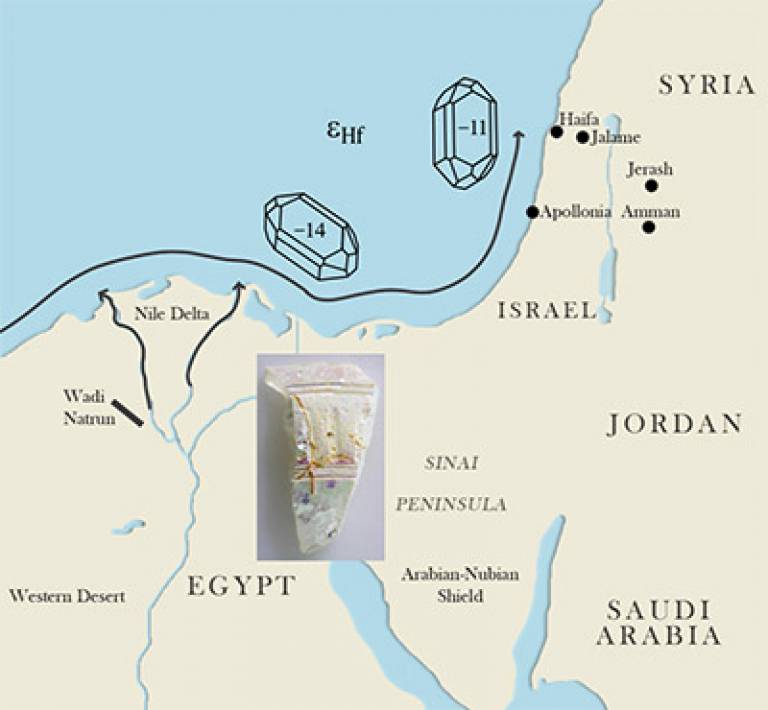 The Roman glass industry was prolific, producing wares for drinking and dining, window panes and coloured glass 'stones' for wall mosaics.  One of its outstanding achievements was the production of large quantities of a colourless and clear glass, which was particularly favoured for high-quality cut drinking vessels.

However, the furnaces that made this glass have not been identified by archaeologists although a clue is given by the fourth century Price Edict of the emperor Diocletian, which refers to colourless glass as “Alexandrian”, indicating an origin in Egypt.  A problem has been that large amounts of Roman glass are known to have been made in Palestine, and that telling the difference between glass made in the two regions is challenging.

Their work on Roman glass from the Danish-German Jerash Northwest Quarter Project in Jordan shows that the isotopes of the rare element hafnium can be used to distinguish between Egyptian and Palestinian glass and provide compelling evidence that the prestigious colourless glass known as “Alexandrian” was indeed made in Egypt.

“Hafnium isotopes have proved to be an important tracer for the origins of sedimentary deposits in geology, so I expected this isotope system to fingerprint the sands used in glassmaking”, stated Dr Barfod.  “That fact that this expectation is borne out by the measurements is a testament of the intimate link between geology and archaeology”, said Prof Lesher.

Hafnium isotopes have not previously been used by archaeologists to look at the trade in ancient man-made materials such as ceramics and glass.

“These exciting results clearly show the potential of hafnium isotopes in elucidating the origins of early materials. I predict they will become an important part of the scientific toolkit used in our investigation of the ancient economy.”

Image (courtesy of the Danish-German Jerash Northwest Quarter Project): Simplified graphic showing long-shore transport of sands from the mouth of the Nile up along the Levantine coast (today Israel) where glass factories at Jalame and Apollonia used the sands in glass production during Roman and Byzantine times. Along the way North, some of the zircon minerals contained in the sands drop out leading to the different hafnium isotopic compositions of Egyptian and Levantine glass. Also shown is the location of ancient Gerasa (today the city of Jerash), where the glass vessels in the study come from. Inserted photo: Glass sherd made from high-quality Roman glass originating from Egypt.