Matthew Pope (UCL Institute of Archaeology) is leading an ambitious survey of a former Ice Age landscape, which sits in the English Channel seabed, off the coast of Jersey. 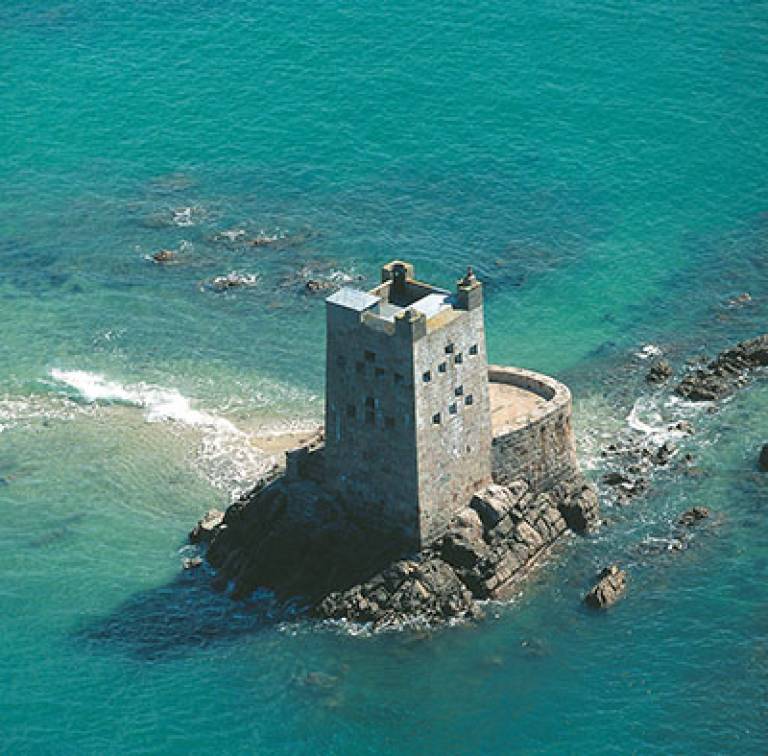 The survey, which will be undertaken on foot by a team of geoarchaeologists, will be located on a section of intertidal reef known as the Violet Bank, which on a low spring tide comprises 10km2 of a former Ice Age landscape in the English Channel.  Within gullies of this solid granite reef, at sea level, are the deposits of former land surfaces and freshwater pools laid down in the Ice Age and more recent prehistory.

The UCL project aims to discover what records of early human behaviour, ancient environment and past climate change, the Violet Bank holds. It also seeks to understand how people used this landscape before the sea inundated it around 6,000 years ago.

Taking advantage of some of the largest tides in the world, the team will spend a week living in a refuge tower some 3km from land and, after daily periods of complete isolation by the sea, will explore the site at very low spring tides in May 2020. They will look for areas of human activity in the Ice Age to begin to understand how Neanderthal people and other early human groups used the now-submerged landscape of the English Channel, an ancient landscape the team have called La Manche, and how this seabed record can be related to known records on land.

“The Violet Bank is a starkly beautiful and scientifically important landscape. We know there is a record of Neanderthal archaeology, extinct fauna such as mammoth and more recent prehistoric monuments out there waiting to be discovered and documented. This survey is about discovering how we can explore the seabed, in the short tidal windows available, in as methodological and safe a way as possible.”

Jon Carter, Chief Executive of Jersey Heritage, a partner in the project, said:

“We are delighted to be part of this exciting and ambitious project to discover more about Jersey’s prehistory. The Island has an incredible Neanderthal story to tell and one that has already been placed on the international map by the ancient site of La Cotte de St Brelade, located on Jersey’s south-west coast. La Cotte is just a glimpse of the Ice Age landscape that lies beneath the surface, both inland and out at sea, and we look forward to seeing what this new and innovative survey reveals.”

The project will act a pilot for wider surveys of prehistoric potential in the English Channel region. It will help the team develop ways of locating important artefacts and scientific records from landscape, which will become increasingly inaccessible and at risk of erosion as climate change drives sea level rise.

The project is funded by a British Academy/Leverhulme Small Research Grant, and supported by Jersey Heritage and the Société Jersiaise.