UCL Institute of Archaeology researchers are involved in collaborative research which has discovered what is believed to be the earliest art in the British Isles. A new study has confirmed that prehistoric societies in the British Isles were creating artistic designs on rock as long ago as the late Ice Age.

For the first time, archaeologists have analysed the ancient markings made on a group of flat stones, known as plaquettes, uncovered at Les Varines, Jersey, and believe they date from the late ice age – some 15,000 years ago. The plaquettes are believed to have been made by the Magdalenians, an early hunter gatherer culture dating between 23,000 and 14,000 years ago. The Magdalenian era saw a flourishing of early art, from cave art and the decoration of tools and weapons to the engraving of stones and bones.  These engraved fragments represent the first evidence of engraved stone plaquettes found in the British Isles, seemingly predating the cave art and engraved bone at Creswell Crags, Derbyshire.

Ten fragments of stone plaquettes extensively engraved with abstract designs were uncovered at Les Varines, Jersey, between 2014 and 2018. Since then, a team of archaeologists from Newcastle University, the Natural History Museum and York University have been analysing the prehistoric markings and believe they represent the earliest evidence of artistic expression discovered in the British Isles. The research and excavation team, which also included experts from the universities of St. Andrew’s, Strathclyde, Liverpool, Wales, as well as the UCL Institute of Archaeology and the British Museum analysed the stones for traces of how the markings were made. 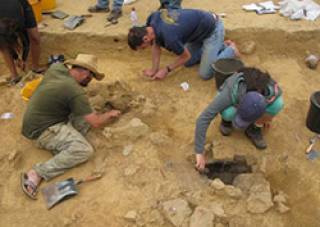 According to Ed Blinkhorn:

“The plaquettes were tricky to pick apart from the natural geology at the site - every stone needed turning. Their discovery amongst hearths, pits, paving, specialist tools, and thousands of flints shows that creating art was an important part of the Magdalenian pioneer toolkit, as much at camp as within caves."

Analysis revealed that the plaquettes are engraved with groups of fine lines, thought to have been purposefully made using stone tools. The geometric designs are made up of a combination of straight lines more or less parallel to each other and longer, curved incisions. According to the research team the two types of marks are likely to have been produced using the same tools, possibly by the same engraver and in short succession, giving new insight into the processes used to create the ancient designs.

“This discovery resulted from detailed work by a team built on expertise and commitment to working together in a cooperative and multidisciplinary way. The Les Varines camp site is internationally important in clearly shows humans, beyond the previously known limits of climate change and ecological range at the end of the last Ice Age, bringing culture and creativity into the heart of their homes.”

The research took place as part of the Ice Age Island project, funded by Jersey Heritage, the British Academy, the Society of Antiquaries and the British Museum and is published in PLOS ONE.