Collaborative research involving Tomos Proffitt of the UCL Institute of Archaeology will feature in the British Academy Summer Showcase 2019. 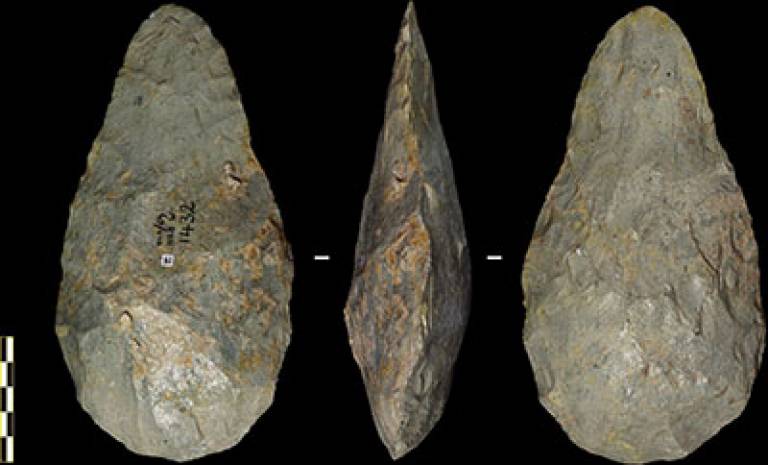 How did we invent technology?

Human beings are a technological species. Scientists who are interested in human origins are faced with the fundamental questions: when and how did our species start using tools, and why did they start to become complex? As archaeologists, we address these questions by looking at the earliest evidence we have for human technology: stone tools.

Recent discoveries in Kenya suggest that stone-tool use and making could be older still. In 2015, a completely different stone tool technology was discovered, at a site called Lomekwi 3 on the western shore of Lake Turkana in Kenya. This discovery is ground-breaking not only because it pushes back the boundaries of when our ancestors made and used stone tools, but also because it has significant implications for our understanding of which specific species of early human or hominin, made the earliest stone technologies.

In trying to understand how humans first came to use stone tools, archaeologists have recently started to look at non-human primates that also use stone tools. These include chimpanzees from West Africa, long-tailed macaques from southern Thailand, and capuchin monkeys from north eastern Brazil. All these groups of primates frequently use stone tools to break open different foods.

Tomos Proffitt, currently a British Academy Postdoctoral Fellow at the Institute, will be participating in the British Academy Summer Showcase, a free festival of ideas for curious minds, on 21-22 June to share information about why humans started inventing stone tools. Participants can test their ability to spot the difference between rocks, early tools and primate tools, then measure their muscle activity using different tools, to see which are the most energy-efficient.