In the context of the AHRC Heritage Research Deterritorialising the Future programme, Arts Catalyst artist-in-residence Tuguldur Yondonjamts will be in conversation with archaeologist Denis Byrne at the UCL Institute of Archaeology on 13 September. 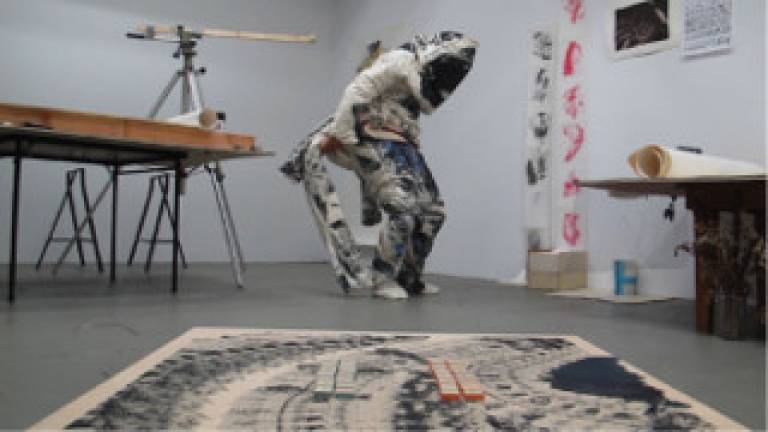 Taking the artist's investigative practice and its interest in the rapidly changing Mongolian society as a departure point, the dialogue between Yondonjamts and Byrne will explore the intertwining of rituals, objects and practices within the dramatically accelerating Mongolian economy, which is deeply affected by the extraction of natural resources as the basis of its economic development.

Tuguldur Yondonjamts is a Mongolian artist who works primarily on paper, but has expanded his practice to video and installation art. His work is very much dependent on research and careful analysis of certain environments and materials. By using investigational logic, he is able to create large scale drawings and diagrams, representing imagined journeys. The nomadic culture of Central Asia is critical to interpreting Yondonjamts's work. For him, these are symbolic endeavors, studying the issues affecting Mongolia's society and economic development.

Denis Byrne is Senior Research Fellow at the Institute for Culture and Society, University of Western Sydney, Australia. He has worked in both the government and academic spheres of heritage conservation and has been a leading contributor to critical debates on heritage issues in Southeast Asia and indigenous Australia. He is co-editor (with Sue O'Connor and Sally Brockwell) of Transcending the Culture-Nature Divide in Cultural Heritage (2013) and author of Surface Collection: Archaeological Travels in Southeast Asia (2007).

The Deterritorialising the Future symposium on heritage in, of and after the Anthropocene will be held at Senate House, London on 14 September and will bring the rapidly expanding field of critical heritage into productive dialogue with emerging trends in the posthumanities.