Hieroglyphs from the Trenches: Thomas Eric Peet and WW1 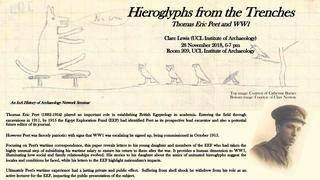 Thomas Eric Peet (1882-1934) played an important role in establishing British Egyptology in academia. Entering the field through excavations in 1911, by 1915 the Egypt Exploration Fund (EEF) had identified Peet as its prospective lead excavator and also a potential future editor of its journal.

However Peet was fiercely patriotic: with signs that WW1 was escalating he signed up, being commissioned in October 1915.

Focusing on Peet's wartime correspondence, this paper reveals letters to his young daughter and members of the EEF who had taken the highly unusual step of subsidizing his wartime salary to ensure his return to them after the war. It provides a human dimension to WW1, illuminating how social and family relationships evolved. His stories to his daughter about the antics of animated hieroglyphs suggest the locales and conditions he faced, while his letters to the EEF highlight nationalism's impacts.

Ultimately Peet's wartime experience had a lasting private and public effect. Suffering from shell shock he withdrew from his role as an active lecturer for the EEF, impacting the public presentation of the subject.