Michelutti is interested in the ethnographic study of caste/race, popular democracy, violence, crime and politics as well as cultures of leadership, authority and masculinity. She has carried out extensive fieldwork in North India (Uttar Pradesh) and has worked in Venezuela and on South Asia in comparative contexts. She is the author of 'The vernacularisation of democracy: politics, caste and religion in contemporary India' (Routledge 2008). More recently she has been writing on bossism and mafia systems of governance ('Mafia Raj') in South Asia. She is also working on a  monograph on charisma and political experimentations in Venezuela (provisionally entitled: 'In the name of the people. Gods and politics in a Venezuelan village').

Her research has been funded by the Economic Social Research Council (Post-Doctoral Fellowship 2002-2004; Research Grant 2004-2008; Research Grant 2012-16), the Nuffield Foundation (2009) and an ERC-Starting Investigator Grant - funded by the European Union as part of the Framework Programme 7 (FP7) (2012-2016). In 2017, she has been awarded an ERC Proof of Concept Grant (2018- 2020) to enhance the impact of her research on political criminal economies in South Asia and develop an Ethnographically Driven Risk Analysis Framework (EDRAF) for social business and impact investing in risky political economies.

In 2020 she has been awarded an ERC-Advance Grant (2021-2025) funded by the European Union to study extortion practices cross-culturally.

(2018) with Ashraf Hoque. Brushing with organized crime and democracy: the art of making do in South Asia. Journal of Asian Studies,  1-21.

(2017) 'We are all Chavez'. Charisma as an embodied experience. Latin American Perspectives: a journal on capitalism and socialism. Vol. 44, Issue 1. 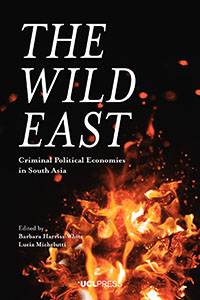