Working with our partners in London

As a global leader in knowledge exchange, enterprise and open innovation with societal impact, we are establishing UCL at the centre of a cluster of organisations that will make London the premier destination for higher education. How we engage with the city and contribute to its improvement for all who live and work here is central to this aim. 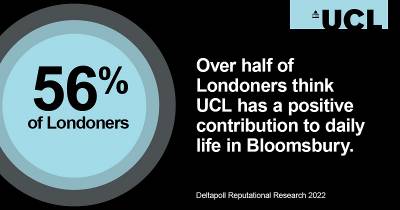 Since its launch in November 2020, The London Framework has become a significant resource for UCL internally, as well as providing a vital entry point to partners and stakeholders across London.

In the two years since The London Framework’s inception, UCL has been more impactful in how it creates purpose, connects people and celebrates its place in, of and for London. The now established London Office, based centrally within the UCL President & Provost Office, enables a strategic and targeted way of engagement, as well as amplification of UCL’s activity in and across London with our partners.

The Framework’s goal to enhance engagement, coordinate relationships and enrich society, whilst amplifying UCL’s impact in London, remains. We strive to develop external partnerships in order to have meaningful, reciprocal long-term benefits and goals through collaboration and aligned priorities. Our well-established relationship with the London Borough of Camden and our joint Memorandum of Understanding is one fantastic example of how university-local authority relationships can flourish for the benefit of local people, communities, and place. Through UCL East, we have been establishing a strong relationship with the London Borough of Newham and we are working closely on shared priority projects to respond to grand challenges surrounding sustainability and prosperity.

Research commissioned by the London Office in spring 2022, conducted with core partners and over 1,250 Londoners, outlined:

Tomorrow’s Home 2050: An immersive look to the future

In November 2021, the UCL Institute of Healthcare Engineering (IHE) held an eight-week exhibition at the Museum of the Home in Hoxton, called 'Tomorrow's Home: 2050'. An immersive installation where the home of the future – 30 years from now – became a reality.

Tomorrow's Home was a UCL collaboration with The Liminal Space and funded by Royal Academy of Engineering's Ingenious programme, involving researchers, artists, designers, engineers, museum leaders and the public. Visitors were able to travel through the installation and imagine how home technology could help them in the future and decide whether it was creepy or convenient.

Visitors filled out questionnaires designed by the IHE and the Liminal Space, in which they responded to the ideas envisioned in the Tomorrow’s Home exhibition. They also gave feedback on how they would like healthcare engineers and scientists to engage with the public.

Out of visitors to Tomorrow’s Home:

The project also sparked several discussions and collaborations around the exhibition's key topics and themes.

In spring 2022, the Special Collections’ Outreach team set out to deliver a second iteration of The New Curators Project.

It is well documented that the cultural heritage sector presents significant challenges for those wishing to access this field of work, who do not have financial support from elsewhere, have not gone to university and do not have any means by which to learn about the nuances and requirements of the diverse roles represented in the field.

The New Curators Project is intended to be a proactive contribution towards tackling some of these barriers, offering 10 bursary supported places to young people who have not been to university and who have less than six months paid experience in the field.

Building on a close partnership with Newham Heritage Month, the Outreach team raised just over £8,000 from Foundation for Future London to devise a four-month career-focused programme for young east Londoners.

The participants attended a programme of 15 two-hour sessions across four months that provided real-world skills and competencies in an inclusive and creative way:

They were also given the opportunity to respond as a group to a real-life brief from a local heritage festival, Newham Heritage Month, which had as its theme ‘What 2012 Means to Us’. The cohort chose to collect oral histories and create a short film.

The project served to boost participants skills and provided them with sector-relevant knowledge and experience. The project was widely praised by the participants, with many saying that the project increased their confidence and provided useful insight into a potential career in the cultural arts sector. One participant has already started a paid Step internship at UCL.

The project’s ongoing success has spurred the Outreach team on to begin planning 2023’s iteration, which will be based at the new UCL East campus.