Working with our partners across the world

We are building a significant reputation internationally through the impact we make in communities abroad. We work in partnership with NGOs, health and social care providers, higher education systems, and international business and industry as well as other HEI partners for collaborative academic activities.

UCL’s response to the war in Ukraine

In February 2022, when Russia invaded Ukraine, UCL’s School of Slavonic and East European Studies (SSEES) community quickly came together to help the world understand the region that we have been researching for over a century. Experts from SSEES continue to provide extensive media comment and analysis, alongside our 'SSEES on Ukraine' hub, which contains reliable sources of news coverage and legitimate ways to help those affected.

Our ongoing SSEESing Now series of research seminars has looked at the displacement of migrants from the war, how cultural heritage can be preserved in Ukraine, journalism in times of war, identity and architecture. The SSEES Student Society has continued since February to run an incredibly successful donation drive, organising over 1500 boxes of aid to refugees on the Ukraine borders. Most recently, in collaboration with UCL’s Office of the Vice-President (Advancement), SSEES hosted an event attended by the Provost for the UCL Ukrainian Visiting Fellows who have come to UCL under the Academic Sanctuary Fellowship Scheme.

Meanwhile, the SSEES Library continue to enhance their excellent collections, not least because it is expected that scholars of the region will need to conduct their research outside of Russia, at locations such as SSEES, but also to support Ukrainian academics arriving under the auspices of the UCL Academic Sanctuary Fellowship Scheme. 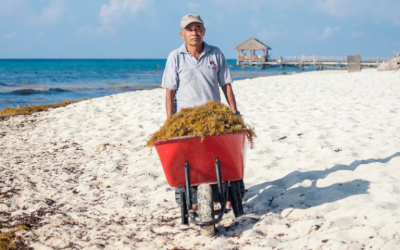 As the world looks to a future away from fossil fuels and petro-chemically derived fuels and chemicals, researchers have been looking into the uses of seaweed as an alternative fuel given the significant amount of carbon locked within its structure.

The increased levels of seaweed washing up on the shores of Mexican beaches is currently a major problem for the country. It is harms tourism, disrupts the ability of turtles to lay their eggs, and is expensive for the Mexican government to continually remove and dispose of.

Dr Emily Kostas (UCL Biochemical Engineering) used Global Engagement Funds to collaborate with peers in Mexico to discuss biorefining seaweed to create alternative and sustainable bioproducts. Emily was keen to collaborate with Dr Héctor A. Ruiz from the Autonomous University of Coahuila as their research interests are similar, and the funds provided the means to set up a formal and structured collaboration. Due to COVID-19, a two-day online workshop and seminar took place, which saw PhD students and postdoctoral researchers with an interest in the biofinery field give presentations, discuss innovative ideas, identify research synergies, overlap, and identify new areas or project to collaborate on in the future.

The seminar and workshop were so well received by the participants at both UCL and the Autonomous University of Coahuila, the group has decided to have a similar online session annually.

A collaborative project between UCL, Vocal, the Malawi-Liverpool-Wellcome Programme and Liverpool School of Tropical Medicine resulted in the creation of ‘One for All, All for One’ is a comic and film, helping people have conversations about vaccines, community protection and working together in research.

'One for All, All for One' is a four-chapter comic which follows young siblings, Tadala and Mayeso, as they navigate myths and misinformation, see the influence of opinion makers and social media, learn how to come to their own conclusions, and see the long-term impact of their involvement in community research projects.

The comic – written by Nabeel Petersen, illustrated by Cape Town artist Mohamed Hassan and co-created with communities in Malawi – is published in English and Chichewa and will be shared with the public, in clinics, with researchers with governments and public health authorities in Malawi, South Africa, UK and beyond with the aim that they will inform and create further conversations around vaccines and immunisation.

The comic follows the publication of a UCL-led study which found that the current pneumococcal conjugate vaccine (PCV) schedule in Malawi – as offered in many other low- and middle-income countries (LMICs) - does not provide sustained immunity for children against the pneumococcus bacteria after their first year of life.

The study funded by the Bill and Melinda Gates foundation found that offering a booster dose or changing the vaccination schedule available to infants in sub-Saharan Africa could greatly reduce the risk of them contracting potentially fatal diseases such as pneumonia, sepsis and meningitis.