The Home Office keeps records of how many animals are used in scientific procedures in the UK every year. These are published annually and can be accessed on the Home Office website.

UCL is committed to being open about our use of animals in scientific research. As part of this commitment, we audit and publish the number of animals used in UCL research.

In 2021, UCL carried out 185,278 procedures using animals, which is 14% fewer procedures than four years earlier. 81% of these procedures were classified as mild (such as an injection, blood sample or short-term social isolation), or below the threshold for mild severity. 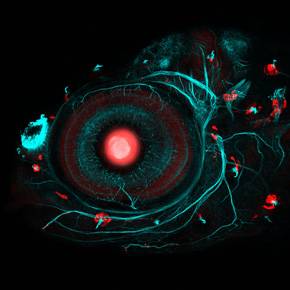 UCL is a large institution with over 5,000 staff in the School of Life and Medical Sciences alone. We have a high research output, with new scientific results being published every day as we strive to increase our knowledge of human and animal health. To achieve valid results, some research projects require the use of many animals. For example, new cancer treatments may need to be tested on large groups of mice in order to reliably determine how effective the treatments are.

Animals are only used where alternatives are not available, and 'transgenic' (genetically modified) mice have replaced many higher orders of animal as a model for human diseases. The use of rats, hamsters and larger animals continues to decrease nationwide as a result of more research transitioning to transgenic mice and alternative models. We constantly strive to replace, reduce and refine our use of animals for research.

Despite advances in non-animal models, transgenic mice often offer the best way to learn about human diseases. 80% of human genes are also in mice, making them a good starting point for research into human conditions. Genetically modifying mice to insert or remove genes is a well-established way of finding out what specific genes actually do. This helps researchers to find out what role genes play in the development of diseases such as cancer and heart disease, information which can then be used to develop better treatments.

Zebrafish are small tropical fish, initially used for studying gene function in early embryonic development and now used in a wide variety of scientific disciplines. 84% of genes implicated in human disease are found in zebrafish and this, in addition to their transparent embryos and ease of genetic manipulation make them good candidates for biomedical research.

As part of an ongoing project, UCL's fish facilities have undergone expansion, as well as remodelling and refurbishment. A new, large fish holding room was opened in 2017, increasing our holding capacity by approximately 20%.

The science ranges from early embryonic development, including early stage eye and brain development, through to behavioural research such as sleep and social behaviours, and the study of human diseases such as blood disorders and cancer. For more information about zebrafish research, its goals and interests please see the zebrafish group website.

Our non-human primate (NHP) research is of the highest quality, regulated by the strict provisions of the UK Animals (Scientific Procedures) Act 1986 and carried out by a highly skilled, responsible and caring team of researchers and animal technologists, with specialist veterinarian support and scrutiny. Non-human primate work is only conducted when there are no alternatives available.

UCL is particularly strong in neuroscience with a substantial international reputation. The capacity to carry out research on NHPs is essential for developing an understanding of complex brain mechanisms at the level most relevant to man for which no other valid model exists. NHPs represent the best available animal model for human function and are particularly important for research into neurological and psychiatric diseases, diseases which now affect over 1 billion people worldwide.

We recognise that research using NHPs brings with it additional responsibilities in terms of ethical issues and welfare needs. UCL supports the provision of the best possible facilities and environment for them and is committed to sustaining these facilities and the associated expertise in the long term. UCL is committed to the principle of the 3Rs with regard to all research animals including NHPs.

There are currently no studies using cats taking place at UCL. They have been used as models for eye disease and spinal cord injury in the past, where no alternatives were available. If cats are the only appropriate models for researchers to answer important medical or scientific questions, their use will be considered by the relevant committees. See how we protect animals for further information on the research approval process.

There are currently no studies using dogs taking place at UCL. If dogs are the only appropriate models for researchers to answer important medical or scientific questions, their use will be considered by the relevant committees.

In addition to the use of animals in regulated procedures and reported through the Annual Return of Procedures, UCL also maintains breeding colonies of rodents for supply and use within the university, thereby avoiding the stresses otherwise associated with their transport and relocation.

While they are not used in regulated procedures, these animals are useful to scientific research as some are used as sentinels to monitor the health of other animals, some form part of breeding programmes but did not express the required mutation, while others are bred for the purpose of providing tissues which may be used in cell culture studies. Sometimes the use of tissues can help prevent the use of animals in procedures altogether.

During 2017, statistical analysis of the number and type of animals involved in this category was captured and reported to the Home Office in accordance with the requirements of EU Directive 2013/63.

Details of the 2017 figures, and further detail about how the animals referenced are used, are available here.