UCL is pioneering the use of non-animal alternatives to study some of the biggest challenges facing modern medicine. 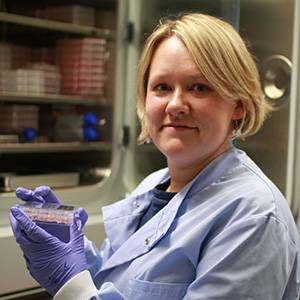 Studying the progression of brain diseases such as Alzheimer's is extremely difficult as samples are often only available post-mortem. Experienced surgeons can take samples of brain cells from living patients, but there are always risks and patients can be understandably hesitant to agree to such procedures.

Dr Selina Wray is now developing a much safer way to study brain cells from patients. How? It's not brain surgery. She can study your brain cells using a small skin sample from your arm. This may sound like science fiction, but Selina's team are perfecting a technique that can turn skin cells into fully functioning brain cells that share the same genetic characteristics as the patient's brain.

The ultimate aim of Selina's work is to help screen new drugs to treat Alzheimer's and dementia without having to test on animals first. This will significantly reduce the number of mice needed for early drug tests. To develop the technique, her group has been awarded a total of £1M by the UK National Centre for the Replacement, Refinement and Reduction in Animals in Research (NC3Rs), co-sponsored by Alzheimer's Research UK, Lilly and Janssen.

Selina's team, comprising researchers from UCL, the University of Strathclyde, RBiomedical and Roslin Cells, won the NC3Rs funding after developing a prototype on an initial six-month £100,000 grant. She beat three other teams to win the final £900,000 award after her technique was deemed to be the most promising in the CRACK IT UnTangle challenge. The challenge was to develop ways of studying how tiny molecules called tau proteins build up in the brain, as these have been linked to Alzheimer's and dementia. 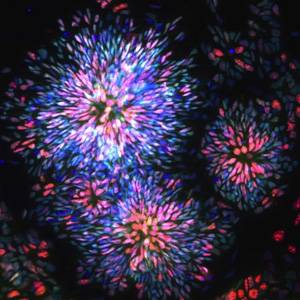 "Tau proteins are molecules in the brain that help to keep cells stable, but too many tau proteins can damage brain cells," Selina explains. "Exactly how they cause damage is currently unknown, but we are hoping that this research will help us to find out. Then we will be able to look at ways of stopping this process, halting the onset of dementia in affected patients."

Previously, researchers including Selina have found high levels of tau proteins in the post-mortem brains of people with Alzheimer's and dementia. Yet scientists need to study living cells in the early stages of disease to understand how it develops and how to stop it.

Research by other groups has shown that tau build-up causes brain cell damage and dementia in mice, but mouse brains are different to human brains. Crucially, mice and rats only have three types of tau proteins whereas humans have six. Some theories suggest that the ratio of different types of tau may have an effect on dementia development, but this cannot be reliably tested in rodents.

"We hope that our new technique will help people to understand and develop treatments for dementia while reducing the need to use animals," says Selina. "The results of animal research from other groups has been important in advancing our understanding of dementia, but it can only go so far.

"Our colleagues at the University of Strathclyde have developed a small device that we will use to study the spread of tau throughout the brain. Separate chambers for brain cells with and without excess tau proteins are linked by tiny tunnels. Brain cells communicate by passing electrical signals along thin nerve fibres, called axons, which can fit through these tunnels. We hope to see whether tau can spread through these connections and if the cells with excess tau are any worse at forming connections.

"Ultimately, the technique will help researchers and drug companies to develop and test treatments that aim to stop dementia in its tracks. It is unclear whether tau does the damage when it is released, when it builds up and clumps together, or both. Drugs may be able to help by stopping tau proteins from being released in the first place, preventing them from spreading or stopping them from building up.

"Using our technique, people will be able to rapidly screen potential drugs before needing to test them on animals. This will greatly reduce the number of animals needed as well as significantly speeding up the development of drugs for dementia."