Although animal research remains a necessary part of modern research, current methods are far from perfect. By injecting the genes that fireflies use to emit light into newborn mice, UCL scientists have developed a way to drastically reduce the numbers of mice needed for research into disease and development. 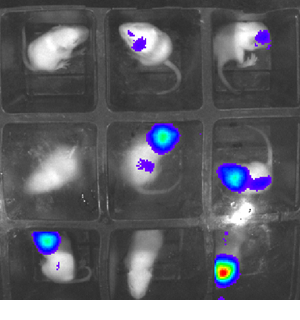 At the moment, researchers often need to cull and perform autopsies on animals to see how diseases develop on a molecular level. This means that an animal needs to be killed for every data point recorded, so some studies might use dozens of mice to get reliable data on disease progression. The new technique could allow researchers to get molecular-level data by simply taking a picture with specialist equipment rather than killing an animal, allowing them to get data more regularly and ethically. An experiment that previously need 60 mice can be done with around 15, and the results are more reliable as disease progression can be tracked in the same mice throughout the experiment.

The researchers have published details of their technique in the open-access journal Scientific Reports so that it can be freely used and developed by other scientists. The work was led by Dr Simon Waddington at the Institute for Women's Health and funded partly by a grant by the European Research Council, and partly by a grant from the UK National Centre for the Replacement, Refinement and Reduction in Animals in Research (NC3Rs) awarded to his collaborator Dr Tristan McKay at St Georges University of London.

"We hope that scientists around the world will be able to use our technique to reduce and refine their use of animals in research," says Rajvinder Karda, who is developing the technique for conscious brain imaging in Simon's lab. "As well as reducing the need to kill animals to take readings, our technique also works without anaesthetic in most cases. This makes it less intrusive and unpleasant for the animals and will also help to improve the science. Some of the molecular processes that are affected by diseases may be influenced by anaesthesia or unconsciousness, particularly those involving the brain, so the new technique should provide more humane and reliable results."

The technique allows researchers to witness a wide range of disease-related processes using a sensitive camera in a lightproof box. Baby mice are injected with a gene extracted from fireflies that glows in the presence of certain molecules. This can be tailored to glow in response to specific processes, such as the spread of cancer cells or infections, allowing researchers to monitor progression in real time. It can also reveal how diseases, and drugs that might treat them, modify molecular pathways in the body.

"In our pilot study we looked at inflammation in the brain, liver and lung but the technique is highly adaptable and could be used to study virtually any disease type," explains Simon. "For example, you could inject the molecular sensor into paws and induce arthritis to observe the molecular processes that go on and see how different drugs might help to reverse them. We could even study different molecular mechanisms simultaneously by engineering genes that react to different processes by emitting different wavelengths of light.

"One of the major advantages is that our method works the same way in the petri dish as in mice and rats. This means that more work can be done in the tissue culture facility before using animal models, and it will be directly translatable. This will again help to reduce the number of animals used in experiments and results from non-animal work should be more readily reproducible.

"At the moment, you can buy animals bred to glow in reaction to certain substances, but these are expensive and not especially versatile. Our method should work with any strain of mouse, or even rat, so researchers can use the same animals that they usually use for the disease model that they study. This reduces the need for further cross-breeding and transportation of animals, and is much more rapid and cost-effective. The images we get are also more precise, as the gene can be injected selectively into the tissue that's being studied so we avoid the background 'noise' of light from the rest of the body."