Dr Clare Stanford is a Reader in Experimental Psychopharmacology at UCL. Despite the intimidating title, Clare is a down-to-earth, compassionate researcher with a real commitment to animal welfare. She is chair of the Bloomsbury AWERB and does not hold back from questioning the ethics of research objectives, as well as the way it is carried out. 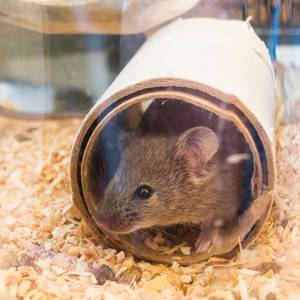 Clare is currently working on a mouse model for Attention Deficit Hyperactivity Disorder (ADHD). This is a strongly inherited psychiatric disorder, which causes problems for patients by making them hyperactive, excessively impulsive and inattentive. ADHD is often regarded as a childhood issue, but about 65% of people carry it through to adulthood where the associated problems are far worse. It has been associated with alcohol and drug misuse in later life, and an estimated 25% of the prison population have ADHD. There is also an increased risk of other health complications, including asthma and epilepsy. Overall, people with ADHD cost the NHS approximately two and a half times more than the rest of the population, including people with other psychiatric disorders.

"I ended up studying ADHD by accident," she explains. "A strain of mice was bred with a genetic mutation that resulted in them being unable to produce a molecule in the brain, known as the NK1 receptor. A lack of these NK1 receptors was thought to mimic the effects of treatment with antidepressant drugs, which was our main research interest at that time. However, we soon noticed that the mutant mice were incredibly hyperactive and did not behave as though they had been given an antidepressant. We also discovered that these mice were calmed by both amphetamine and methylphenidate (the active compound in Ritalin) - a behavioural response that was the opposite to the usual effect of these drugs. This was really interesting because both amphetamine and methylphenidate are first-choice drugs for treating patients with ADHD.

"After looking through all our data and the literature, these mice appeared to be a really good match for what is known about ADHD. As a test of this idea, Dr Andy McQuillin and the late Professor Hugh Gurling, from the Molecular Psychiatry group at UCL, did a large DNA study of ADHD patients and controls. They found a strong association, suggesting that a subgroup of people with ADHD could have an abnormality that affects the same gene as the one that is missing in the mice.

"An advantage of studying ADHD is that the problems can actually be measured. Unlike other psychiatric disorders, we don't need to rely on patients, or mice, to describe how they feel. Although their hyperactivity was easy to see, we also needed to test for inattentiveness and impulsivity because these are key diagnostic criteria for ADHD. To do this, we are using a method originally developed in Cambridge that does not harm the mice and is based on the procedure used to test ADHD patients in the clinic."

This involves placing a mouse in a container with five holes at ground level that they can poke their noses into. The holes periodically light up, one at a time, and the mice learn that when they put their nose into the hole that has been signalled by the flash of light, they will receive a portion of condensed milk as a reward. They have to pay attention and will only receive the milk if they respond correctly. "If a mouse cannot keep his mind on the job, then he will not get the reward," says Clare. They also lose out on a reward if they act prematurely, on impulse, by poking their nose in holes before they light up, or if they poke their nose into the wrong hole.

"The procedure typically takes mice three to four months to learn, in once-daily sessions that last half an hour," explains Clare. "If the mutant mice are a good model for ADHD then we would expect them to be worse at these tests than mice with the normal gene: like ADHD patients compared to people without this condition. So far, our studies suggest that this is the case. If the mice do turn out to be a good behavioural model for ADHD, they would point the way to finding new ways to treat the underlying condition - not just the symptoms.

"Studies of these mutant mice could help to reduce the burden of ADHD on affected people and society as a whole. Our research is suggesting an ocean of drug targets to explore, which could help the many people who are resistant to current treatments. This would not only to improve the lives of people with ADHD but would help their families and wider society as well."