On 26 February 2020, Mr Giovanni Álvarez, director of the Investigation and Accusation Unit (IAU) of Colombia’s Special Jurisdiction for Peace (JEP) delivered a public lecture at UCL. The lecture was hosted by UCL Institute of the Americas, in partnership with the LSE Latin American and Caribbean Centre and Embrace Dialogue (Rodeemos el Diálogo). Dr Par Engstrom and Dr Andrei Gomez-Suarez acted as co-hosts on behalf of UCL Institute of the Americas, whereas the LSE Latin American and Caribbean Centre was represented by Professor Jenny Pearce. 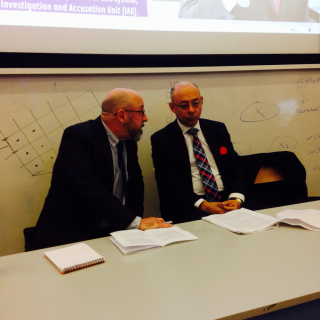 Before becoming the chief prosecutor of the JEP, Mr Álvarez worked for 25 years in the Office of the General Prosecutor of Colombia, investigating cases of human rights violations, kidnapping, forced disappearances and forced displacement, and led cases against paramilitary commanders in the framework of the 2005 Justice and Peace Law (JPL), an important antecedent to the JEP.

Mr Álvarez’s initial remarks discussed the achievements and shortcomings of the JPL, which aimed to reintegrate former paramilitaries into civilian life, in accordance with the pillars of transitional justice – truth, justice, reparations and guarantees of non-recurrence. Important achievements of this disarmament process included the prosecution of 470 paramilitary commanders, investigations into 60 Congressmen for supporting paramilitary groups, the identification of 4.300 victims of forced disappearance, and reparations via administrative means to 10.855 victims. However, the focus on the paramilitary groups meant that other actors of the conflict, such as state agents and third parties, were excluded from the reduced sentences of the JPL, which became an obstacle to accessing the truth behind the multiplicity of crimes committed in the conflict. Moreover, some paramilitary commanders continued leading criminal structures from their prison cells, which contributed to the continuation of the armed conflict. 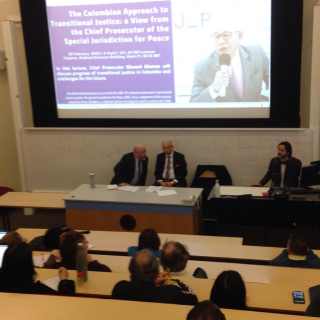 Mr Álvarez then turned to the JEP, the autonomous jurisdiction, independent of Colombia’s ordinary justice system, created by the 2016 peace agreement between the Colombian government and the Revolutionary Armed Forces of Colombia (FARC). The peace agreement incorporated many lessons from the JPL. Unlike the JPL, the JEP investigates crimes against humanity, international humanitarian law, and war crimes carried out by the FARC and the Colombian Armed Forces in the armed conflict (1958-2016). Moreover, it can investigate civilians or non-military state agents accused of participating directly in the conflict, if they voluntarily appear before its jurisdiction. All parties, to access the benefits of the JEP, must commit to contributing to truth, justice, reparations and non-recurrence.

To date, 12.481 people have requested to enter the JEP: 9.734 FARC ex-combatants, 2.640 members of the Armed Forces, and 95 non-military state agents. Magistrates are also studying the request of 900 third parties, including businessmen, congressmen, and mayors.

In today’s context, two years into implementation of the peace agreement, the JEP faces various challenges. First, to protect the lives of the people participating in the processes; more than 160 FARC ex-combatants have been killed since the signing of the 2016 peace agreement, and threats also are made to witnesses and victims. Second, to meet the expectations of Colombian society, the JEP must show results soon by emitting sentences and initiating investigations against actors who have refused to accept responsibility for their crimes. Third, to speed up the process of opening regional offices in the most conflict-affected regions, as distance from conflict-torn regions makes evidence-collection more difficult. Fourth, to open a macro-case regarding the crime of sexual violence in the framework of the conflict. The JEP has thus far prioritised seven macro cases (some based on region, others on groups targeted and other patterns of victimisation), but a macro-case regarding the crime of sexual violence is much anticipated by Colombian and international society. Finally, to strengthen the forensic capacities to speed up the search for more than 100.000 disappeared people. 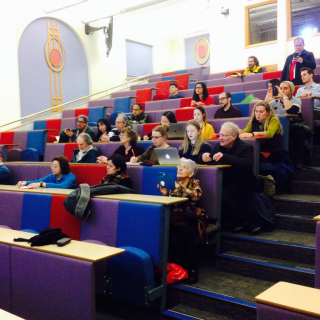 Mr Alvarez’s final remarks focused on the role of the IAU in ensuring effective implementation of the peace agreement. The IAU has six duties. First, to investigate and collect evidence about gross human rights and international humanitarian law violations, to investigate and try perpetrators who do not accept responsibility and do not contribute to truth. Second, to request the expulsion from the benefits of the JEP of accused parties who do not fulfill their commitment to truth, justice, reparation and non-recurrence. Third, to order protection measures for victims, witnesses, and defendants; in the current context of unfolding violence, the IAU has set 46 protection schemes and has carried out 90 risk-assessments. Fourth, to carry out the exhumation and return of remains to families. Fifth, to prioritise cases of sexual violence, for which the IAU has designed a software called “Layna” to log virtual expedients, with which 1400 violations have been recorded. Sixth, to design a protocol of communication with victims, which will be launched on 9 April 2020.

In this context, Mr Álvarez´s lecture showed that transitional justice in Colombia is moving ahead. If well-implemented, this transitional justice process, much heralded as the most innovative in the world to date, could set important precedents for other countries; but the world is watching and there are many challenges to be faced. 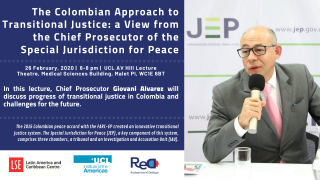