History and current politics of master planning in Accra The practice of preparation of spatial master plans has been a chequered one when it comes to the national capital of Ghana, Accra. A number of planning efforts pre-date independence, but the city’s first official master plan was developed in 1958, exactly one year after the country’s independence with the aim of developing the city in a manner that befitted the status of any “modern national capital”.

However, the military coup that led to the overthrow of Ghana’s first president in 1966 resulted in a “silent period of spatial planning”, during which no master plans were prepared. This only changed in 1991, with the preparation of an integrated and comprehensive strategic spatial plan for the Greater Accra Metropolitan Area in collaboration with UN agencies. This was then followed by the development of a new Regional Spatial Development Framework for the Greater Accra Region by a South African consultancy firm in 2017. This framework was part of the introduction of a new three-tier spatial planning system, under the new Land Use and Spatial Planning Act 925 of 2016, which replaced the colonial planning laws that had operated over a 70-year period.

Contrasting visions and interests around Accra’s future development have turned the practice of master planning in the capital city into one fraught with contestation. These play out particularly in response to the views of national government officials, which continue to echo postcolonial visions of urban modernity. For instance, in 2018 the Ghanaian Minister of Finance invited the Singaporean architect and planner Dr. Liu Thai Ker to develop a new master plan for Accra in order to make it a “modern city”. This sparked anger and resistance among a new generation of Ghanaian urban planners and other built environment professionals, who feel such moves bypass local knowledge and planning capacity, as well as due procurement processes. Moreover, the discussions regarding the contracting of a Singaporean Planner to execute the preparation of a Master Plan for Accra did not involve key actors and institutions such as the Land Use and Spatial Planning Authority (LUSPA), or the Ghana Institute of Planners. While the engagement of the Singaporean planner in the preparation of Accra’s master plan seems to have been abandoned for now, other national government driven projects include the case of the construction of a new National Cathedral of Ghana in Accra, as well as a proposed Marine Drive Waterfront Development. While both projects have been designed by the Ghanaian architect Sir David Adjaye OBE, they do not feature in any existing master plans for the city.

In the meantime, the Department of Highways and LUSPA has come to an agreement with the African Development Bank to fund the preparation of a Structure Plan for the Greater Accra Metropolitan Area, while the Japanese International Cooperation Agency (JICA) developed a Master Plan for a West African Growth Ring for the National Development Planning Commission (NDPC), in collaboration with Ministry of Roads and Highways (MRH) and Ministry of Finance (MoF). This Growth Ring is meant to connect Accra’s road network to Burkina Faso, Côte d’Ivoire and Togo through a network of corridors spanning over 1,000 km.

These different plans and contestations illustrate a structural governance issue, emerging out of a lack of clarity regarding who holds responsibility for the development of Accra. Key here is the lack of coordination between the multiple actors involved in governing and driving the development of the “Accra Space''. An area which represents both a local government and Metropolitan space, as well as a regional and national capital space, with multiple international connections and influences. Understanding the gap between these actors and praxis will require a more comprehensive study of the governance structures, spatial planning tools and a full understanding of the active actors in the urban development of Accra.

Front Cover of the First Official Master Plan for Accra 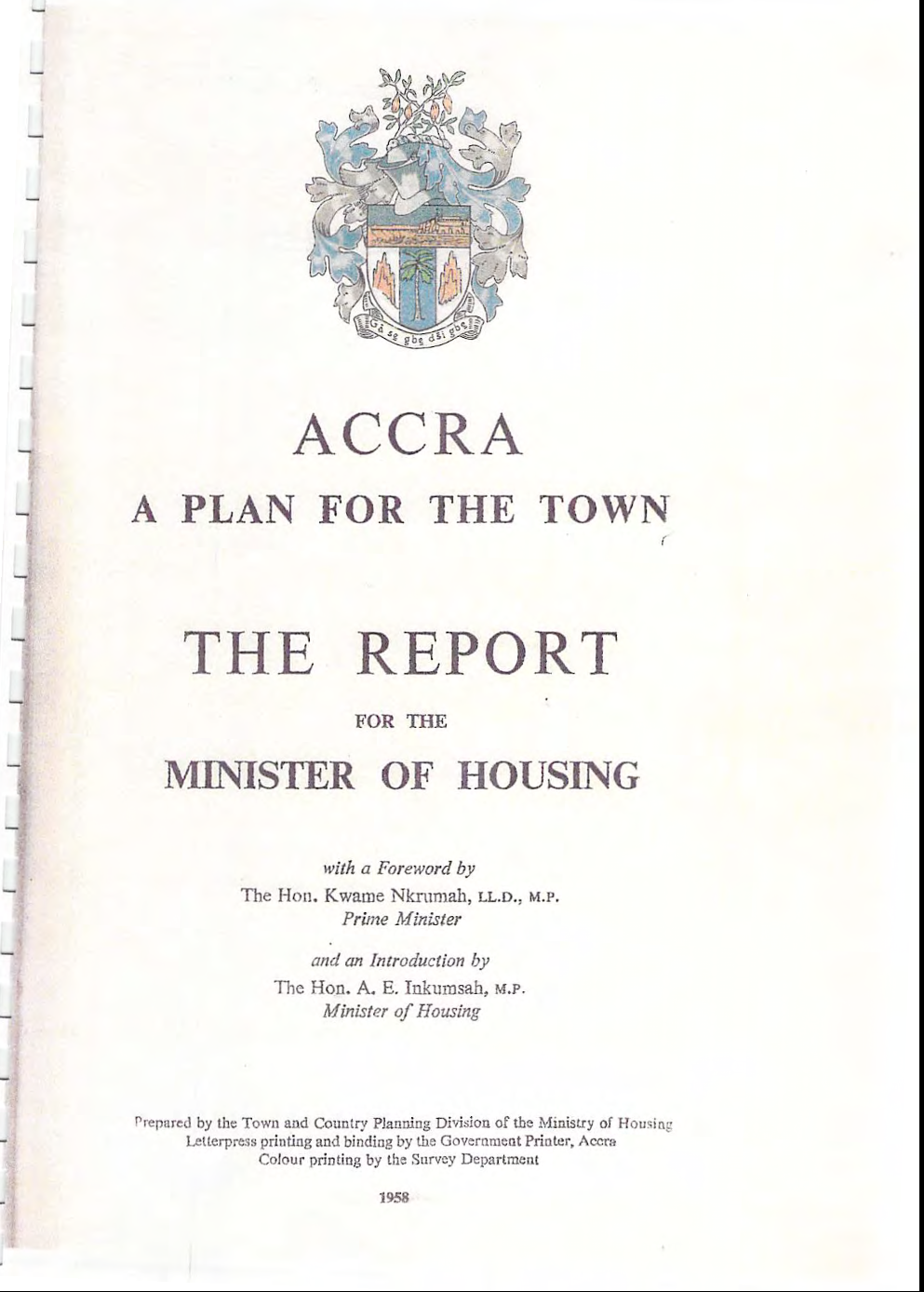