Historian, broadcaster and film-maker David Olusoga was invited to deliver the 2018 edition of the annual Cities Imaginaries lecture at UCL Urban Laboratory on 22 May. 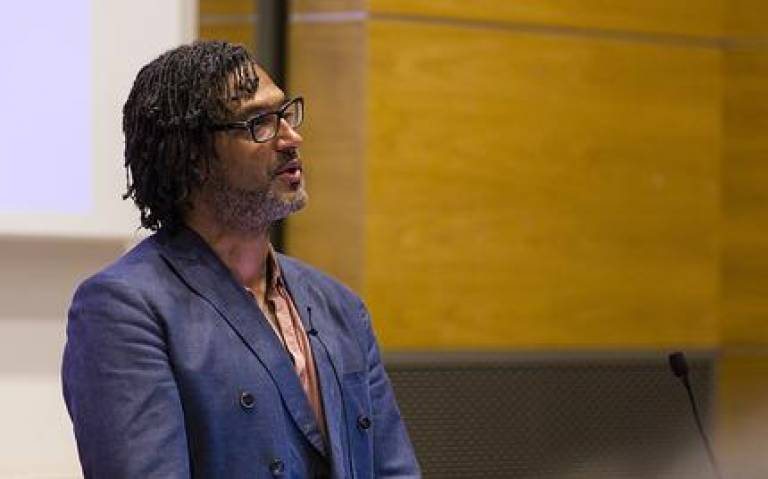 In some ways, the lecture was a return to UCL for the Civilisations host, who collaborated extensively with academics in UCL History researching the legacies of British slave‑ownership, as part of a documentary series broadcast on the BBC in 2015.

At the UCL Urban Laboratory, Olusoga offered a thought-provoking historical journey through periods of housing crisis in the UK - contending that the problem is hard-wired into our cities. He questioned whether today's levels of housing inequality and poverty may even eclipse that seen in the past. Usually careful not to band around terms such as 'Victorian' or 'Dickensian', Olusoga made a point of mentioning that a comparison between our current situation and the Victorian era would be unfair, as we're now at a point which is worse than that.

As one of the first majority urban countries in the world, the UK paid the price for being at the forefront of industrialisation and urbanisation. Living conditions in the rapidly growing cities of Manchester, Leeds and Liverpool shocked international visitors. Significant government action was only taken once the consequences for the population's health were laid bare. As the military began recruiting for the Boer War and WW1, they found that the poor physical condition of the young men signing up - from deformed chests to stunted growth - had serious implications for national security. In 1919 David Lloyd George promised 'homes fit for heroes' to soldiers returning from the war, acknowledging a national responsibility to address the acute shortage of decent housing. Following WWII, the new government launched the largest public house building programme in history under the auspices of local councils, framed by the post-war consensus supporting a welfare state.

The collapse of this social consensus has led us down a path to shocking housing inequalities, not just between rich and poor, but intergenerationally too, as young people part with large portions of their salary to cover rent costs, whilst home ownership has become far from the norm. Olusoga doubted that any contemporary politicians have the answers, vision or strategy to deal with the situation. Taking the raft of unaffordable 'affordable housing' being advertised across the UK, which can often sell for more than nine times average earnings for the area, Olusoga said the situation was even 'Orwellian'.

Ending the lecture with a call for political action, especially among the millennial generation who have lost out so greatly, David said that the post-war portal to home ownership had gone: 'we are on the edge of a social disaster delivered through housing poverty, and anger has got to be the answer'.

Cities Imaginaries is UCL Urban Laboratory's activity strand encompassing the curation and creation of cultural representations of cities and urban life. Led by Urban Lab Co-Director and Professor of Nineteenth-Century Literature, Matthew Beaumont, previous annual lectures have been delivered by high-profile cultural figures, including Urvashi Butalia (watch a video of the lecture), Linton Kwesi Johnson and Amit Chaudhuri. Next year, Cities Imaginaries will host a series of events on Caribbean music and cities, including a lecture with dancehall expert Sonjah Stanley Niaah.