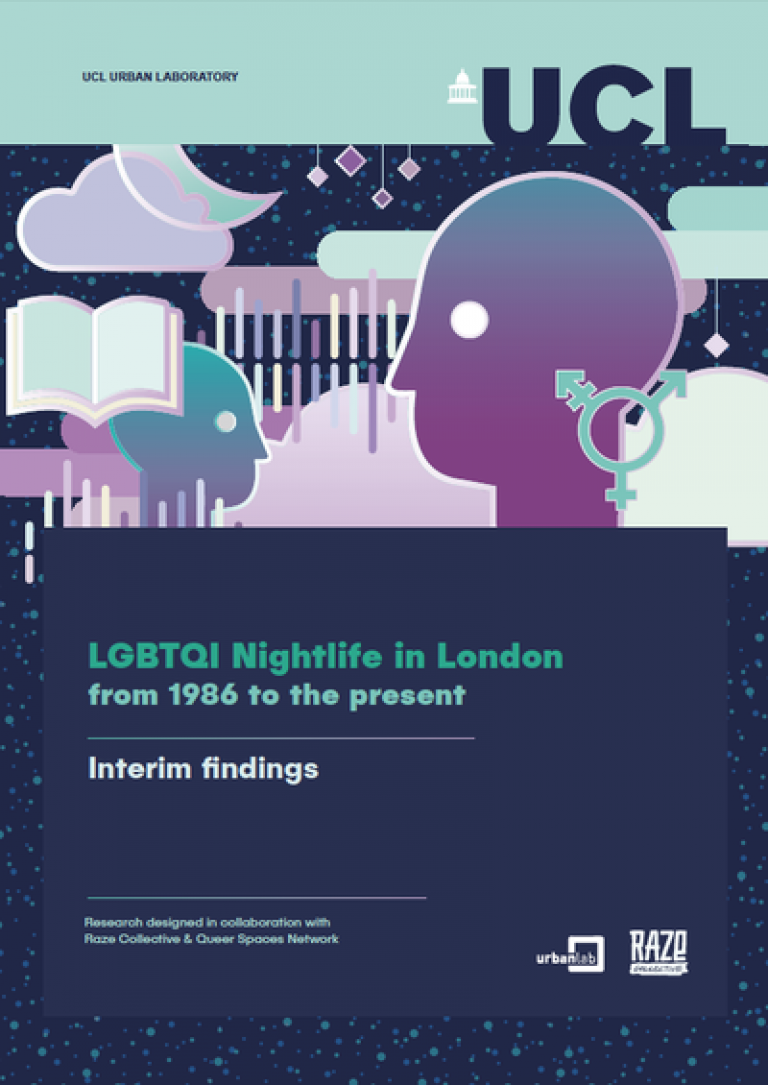 London's LGBTQI nightlife spaces have seen a recent intensity of closures, with further threats to the most longstanding venues, according to a new report from the UCL Urban Laboratory. Spaces catering to women and Black, Asian and Minority Ethnic LGBTQI people have been disproportionately vulnerable to closure.

The research, which has used archives to pilot a mapping exercise of spaces going back to the mid 1980s, highlights the diversity of the capital's LGBTQI nightlife, as an important contributor to neighborhoods and the wider night-time and cultural economy. Through survey and interview data it also shows the importance of these spaces to community life, welfare and wellbeing.

Conducted at the UCL Urban Laboratory by Dr Ben Campkin and Laura Marshall, the report urges politicians and policy-makers, including the Mayor, to positively respond to closures and pressures on venues and other spaces by building protection and promotion of LGBTQI spaces into the London Plan and local borough plans and policies.

Drawing on survey evidence the report argues for the creation of a more favourable culture to support new and existing LGBTQI venues and events through recommending and enforcing improvements to licensing, policing, business regulation, rent conditions, statutory protections for buildings and businesses, subsidies e.g. for accessibility; and through promoting networking among LGBTQI venue owners and managers, night-time entrepreneurs and civil society organisations in order to promote the use of venues for a mix of uses including day-time uses of benefit to LGBTQI and local communities.

Ben Walters, coordinator of the Queer Spaces Network, which supported the report, says:

"UCL Urban Laboratory's research is hugely welcome. This report confirms the vital historic and ongoing importance of London's spaces of LGBTQI community and culture; the scale of the challenge we face in defending them from rapacious redevelopment; the eagerness within the community to reinvent them for the twenty-first century; and the necessity that all levels of government step up to support that evolution.

"More than that, UCL Urban Laboratory's report is a wake-up call to all Londoners who value independent, alternative and underground life in the capital. Unless we champion it now, London will become a wilderness of luxury and alienation."

"Our research evidences, for the first time, that there has been a recent intensity of closures of the most longstanding LGBTQI nightlife venues. Spaces directed towards women and BAME LGBTQI people have been disproportionately vulnerable to closure. Many venues remain at risk, including those the London LGBTQI community deem to be of most value - as places to socialise, be entertained, make art or find mutual support."

The research looks at London since 1986 - when the Greater London Council was disbanded, marking a shift in urban regeneration policy - to the present day - a time of wide reporting and activism around the closure of commercial LGBTQI spaces.