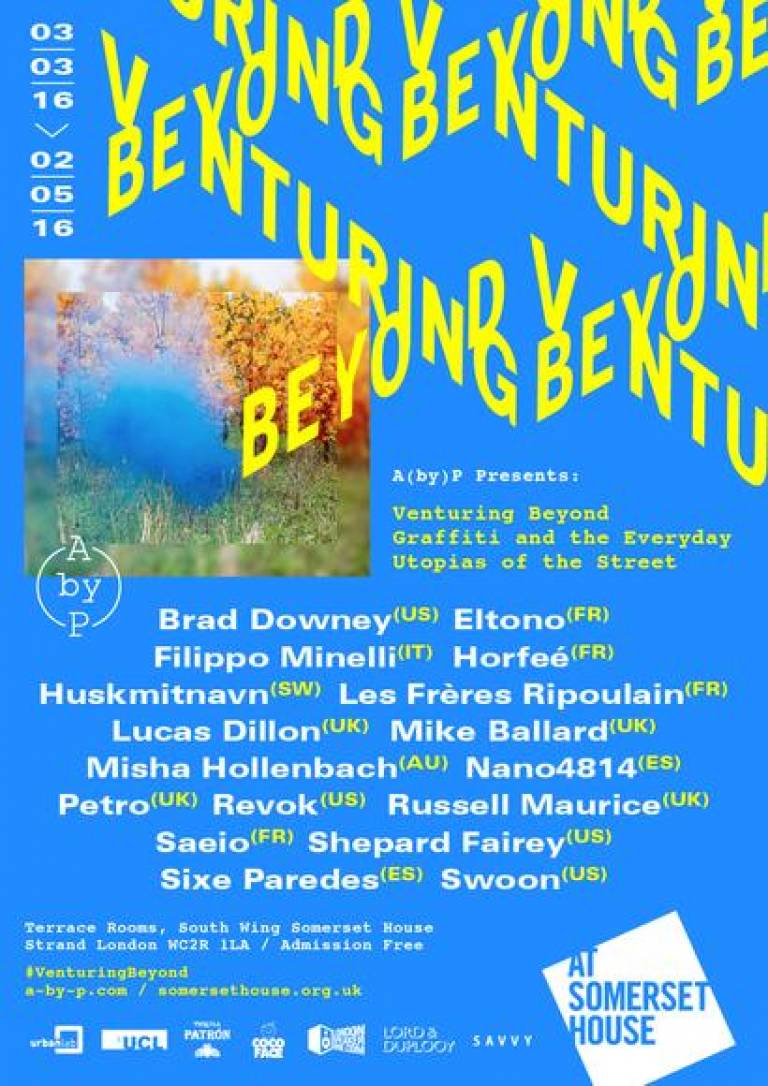 UCL Urban Laboratory is pleased to announce a collaboration with arts organisation A(by)P for the Venturing Beyond: Graffiti and the Everyday Utopias of the Street exhibition, which opens on Thursday 3 March as part of the 'UTOPIA 2016' season.

The exhibition explores unsanctioned public art - or graffiti - as an intrinsically utopian practice, arguing against the traditionally-held belief of graffiti as a dystopian movement or 'glorified vandalism'. Venturing Beyond will showcase the specially-commissioned work of seventeen street artists from around the globe, from stars of the scene such as Shepard Fairey, Swoon and REVOK, to critically acclaimed artists such as Eltono and Filippo Minelli, each of whom will produce or specially select pieces responding to this theme.

In a literal sense, graffiti compels its practitioners to 'venture beyond' spatial and architectural boundaries, but also metaphorically provokes them to 'venture beyond' conceptual frontiers, to form new ways of thinking, acting and being in the world. Graffiti ornaments the city in resplendent colour and brings art out into the open, an art which belongs to all of us. It simultaneously reveals an aesthetic and social practice which anyone is welcome to join. Above all, graffiti and street art acts as an alternative voice, whether it is loud and brazen or more subtle and difficult to decipher, which strives to challenge the well-worn systems of society - something which Thomas More's seminal text also set out. All of the artists will uniquely interpret their ideas on these utopian foundations of graffiti.

The cultural programme will include a wide-range of events that follow the key themes of the exhibition, including a special edition of the Urban Lab's Stadtklang music evening on Sunday 20 March, and a number of workshops, talks, and performances. More information will be posted on the UCL Urban Laboratory and Somerset House websites later this month.

The collaboration builds on the Urban Laboratory's recent support for the Mapping the City exhibition which took place at Somerset House in winter 2015.