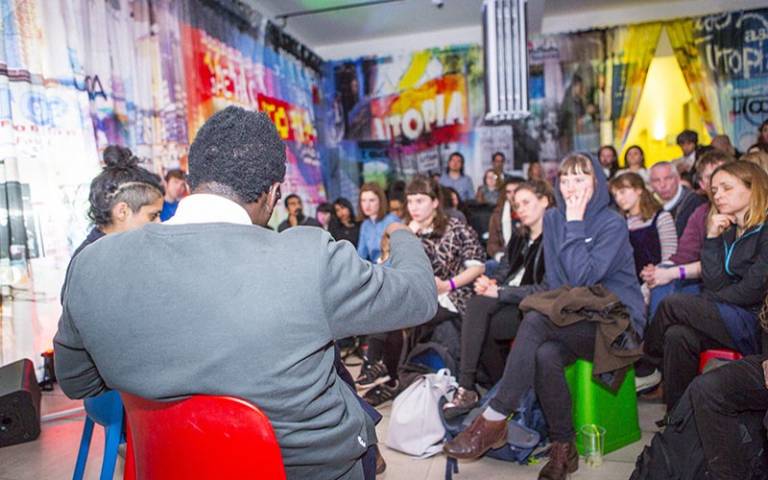 An afternoon of panels and evening of music and poetry at the Bloomsbury Theatre exploring how performance cultures help shape transnational urban narratives.

Following UCL Urban Laboratory's Cities Imaginaries Lecture by Sonjah Stanley Niaah on 16 May, this afternoon and evening of performance and discussion in the Bloomsbury Studio will explore how different music and dance cultures shape diverse neighbourhoods and urban narratives in large cosmopolitan cities. Through the event we contend that performance forges ties between communities dispersed across historic transnational networks, and creates shared urban histories and heritage between cities.

An afternoon of free panels will lead into a ticketed evening event. Please see below for details.

In this panel response to the Cities Imaginaries Lecture by Sonjah Stanley Niaah delivered on the previous evening, leading academics consider the event’s key question of how performance culture shapes urban narratives, through presentations of their own innovative projects.

Roundtable session with current PhD candidates exploring cultures, geographies, practices, histories, and theories of music and the city to examine - through collaborative discussion - questions and provocations formed by their own abstract submissions, led by the chair. The purpose of this roundtable is to discuss multiple cases and comparative approaches to understanding the relationship that music has to the city as socio-cultural, economic, historical, and political object/agent in the context of the participants’ research. Participants include:

To attend the afternoon of panels, please book through Eventbrite.

This event presents artists working across different mediums for an evening of performance and discussion relating to their creative influences, inspirations, and approaches to creating and performing music and poetry which consider questions of identity, mobility and migration.

Derrick has always been fascinated in exploring different practices and formats to communicate ideas and emotions in a multidisciplinary way. His background as a Photographer often inspires his perspective; his films are essentially extensions of his photographic practice, often experimental, raw, emotional and expressive. The short film entitled 'Jagga Jagga', uses the music and aesthetic of the artist Afrikan Boy to explore the unanticipated journey of the Black experience. The piece will be introduced by a poetic monologue performed by Rochelle Shante.

Melz is a non-binary decolonial theorist, activist, and artist they have spoken on decoloniality across the country and around the world. Melz is passionate about decolonising knowledge and spaces and writes extensively about this in their music and poetry. They have worked with platforms such as TEDx and The Huffington Post, as well as spoken across the country and around the world, offering poetic and musical responses to some of the most critical issues facing our society and political system.

Munesu Mukombe is a multi-Disciplinary artist specializing in film, performance, and writing. British born, primarily raised in the United States, and also descending from Zimbabwe, Munesu calls herself a third culture kid. Her work delivers stories and issues around race, class, love, grief, and sexuality. Everything Happens under The Sun Is a film based on her experience navigating white spaces from her right-wing family in America to her experience at Goldsmiths university, accompanied by a poem which she will read.

This performance will showcase the music closely informed and inspired by the Black Atlantic musical genre of Dub. Inspired by early Dub pioneers from Jamaica, such as King Tubby and Lee “Scratch” Perry, the artist uses a 12 track mixing desk and a reverb effects machine to create live soundscapes, taking the audience on an exploratory sonic journey. Hyacinth creates sound, primarily using hip hop and Dub production techniques to craft warm and intimate soundscapes.

Nacheal Catnott is an artist, curator, filmmaker and founder of arts platform WOKE. UK. She combines traditional documentary film practices alongside methods of artistic representation and her practice addresses race, migration and cross-cultural diversity within Britain. Nacheal presents the yam as a symbol of Black British people who have have migrated into British society and become part of a multicultural and ethnically diffused landscape. ‘Recollection’ is a short experimental film, accompanied by a poetic dialogue, which manipulates references to popular culture in order to comment on the lack of visibility of black people in British institutions.