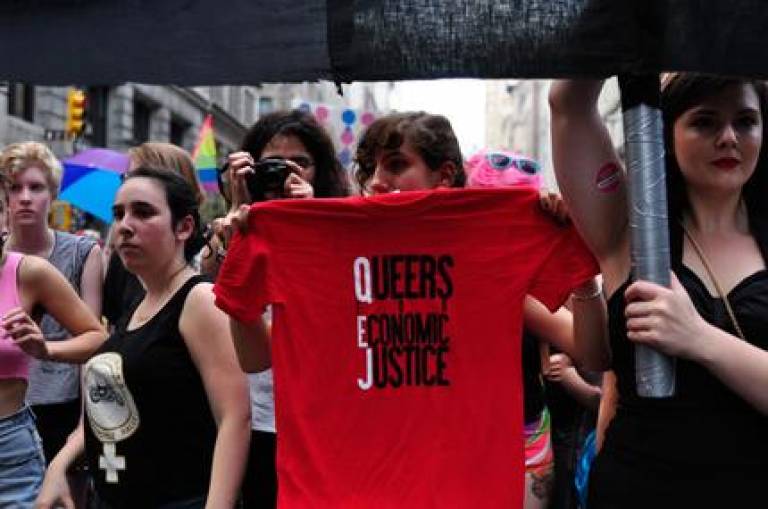 In his recent narrative history of London as a Queer City (2017), Peter Ackroyd writes:

'London is by nature subversive, suborning previously tight bonds of kinship. That is why it symbolises abstract space and abstract justice instead of the claims of family. Other forms of community emerged, communities formed by those of similar tastes or habits. They could be part of the culture of the street or tavern, or they might be communities of strangers associated with certain footpaths or bog houses. Some of them claimed the city as their own. The city was the haven and the home of anonymity.'

Ackroyd's is only the latest attempt to reduce the essence of the city to its anonymity and in turn make that into an essential figure of gay sexuality. But what if such tunnel visions miss the real patterns of inter-connectedness between urban and gay cultures that are developing on the ground? What if the social complexity and heterogeneity of the metropolis is also to be found in its spatial and sexual politics?

In this Livingmaps 'Our Kind of Town' seminar, supported by UCL Urban Laboratory, two scholars will draw on their recent research to queerly received notions of London as a playground of gender transgression and fluidity and to explore what might be added to a Citizen's Atlas from a more grounded and critical LGBTQ+ perspective on cultural cartography. Please purchase tickets here.

Drawing on evidence gathered through UCL Urban Laboratory's project LGBTQ+ Cultural Infrastructure in London, Ben will discuss recent activist campaigns to protect LGBTQ+ space in London, as well as the Mayor of London, Night Czar and Greater London Authority's policies designed to support these initiatives. His talk will discuss the controversy surrounding the UN Habitat 3 New Urban Agenda in relation to the exclusion of LGBTQ+ people as a vulnerable group. A parallel critique is made of some strands in urban studies that neglect queer theoretical contributions. Ben will go on to draw on insights from the emerging field of critical heritage studies to look at the tensions between activists' and policy-makers' use of heritage policy and legislation to protect queer spaces, and the practice of making queer space as a radical gesture. Finally, the talk will compare the present situation with the historical example of the Greater London Council-sponsored London Lesbian and Gay Centre and the groups and activities it hosted in the 1980s and 1990s.

Ben Campkin is the author of Remaking London: Decline and Regeneration in Urban Culture (IB Tauris, 2013), which won the Urban Communication Foundation's Jane Jacobs Award, 2015. He is co-editor of Dirt: New Geographies of Cleanliness and Contamination (I.B. Tauris, 2007), the series Urban Pamphleteer (2013-), Engaged Urbanism: Cities and Methodologies (I.B. Tauris, 2016) and Sexuality and Gender at Home: Experience, Politics, Transgression (Bloomsbury, May 2017). Ben is Senior Lecturer in Architectural History and Theory at the Bartlett School of Architecture, University College London, and has been Director of UCL's Urban Laboratory since 2011.

This talk will bring queer critiques of sexual progress into dialogue with methodological debates over how to map LGBTQ+ urban experience. Brixton is an area of London that is only rarely identified as significant to LGBTQ+ life in the Capital, an erasure that has implications for both urban class analysis and understanding how spaces and places get racialised Emma will begin by presenting an anthology of 'small stories' drawn from her ethnographic research, interviews and archival work, which detail Brixton's rich LGBTQ+ past, and lively present. Layered together, these stories build up an account of Brixton that both reveals, and interrupts, sexual progress narratives in contemporary debates on the processes of regeneration/gentrification in London. This situated analysis, as I will go on to discuss, also generates insights into the transnational spatial webs that LGBTQ+ identification fosters, as well as the concurrent mapping of spaces of intolerance. Emma will conclude the talk by discussing the potential and pitfalls that recent approaches to researching sexual experiences in the city - including cultural cartographies - present for a queer politics of space.

Emma Spruce is a Fellow in Gender, Sexuality and Human Rights at LSE's Department of Gender Studies. She recently completed doctoral work exploring LGBTQ experience in Brixton, which drew on three years of qualitative research to examine the imbrication of local, national and transnational discourses in framing both spaces of homophobia, and spaces of sexual tolerance. Her published work includes 'Bigot Geography: Queering Geopolitics in Brixton', in Sex, Time and Place: Queer Histories of London, c.1850 to the Present (Bloomsbury, 2016), and '(It's not all) Kylie Concerts, Exotic Cocktails and Gossip' in The SAGE Handbook of Feminist Theory (Sage, 2014).