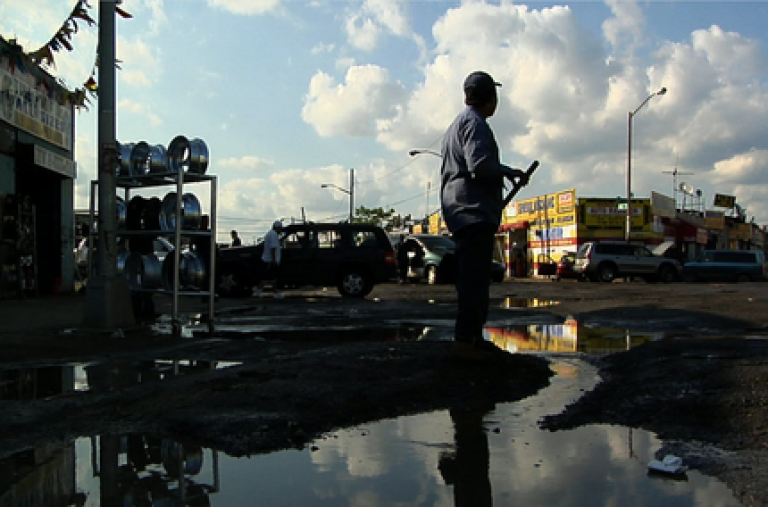 Tickets for the screenings can be purchased on Eventbrite.

A hidden enclave in the shadow of the New York Mets' new stadium, the neighborhood of Willets Point is an industrial zone fated for demolition. Filled with scrapyards and auto salvage shops, lacking sidewalks or sewage lines, the area seems ripe for urban development. But Foreign Parts discovers a strange community where wrecks, refuse and recycling form a thriving commerce. Cars are stripped, sorted and cataloged by brand and part, then resold to an endless parade of drive-thru customers. Joe, the last original resident, rages and rallies through the street like a lost King Lear, trying to contest his imminent eviction. Two lovers, Sara and Luis, struggle for food and safety through the winter while living in an abandoned van. Julia, the homeless queen of the junkyard, exalts in her beatific visions of daily life among the forgotten. The film observes and captures the struggle of a contested "eminent domain" neighborhood before its disappearance under the capitalization of New York's urban ecology.

Memo Mori is a journey through Hackney tracing loss and disappearance. A canoe trip along the canal, the huts of the Manor Garden allotments in Hackney Wick, demolition, relocation, a magical bus tour through the Olympic park and a Hell's Angel funeral mark a seismic shift in the topography of East London.

Sally Mumby-Croft's elegiac video meditates on the impact of the deletion of an entire landscape and all it contains. A refreshingly unregenerated and wild place, an 'unregulated landscape' rich with history and possibilities, is now being turned into one of the most oppressively manipulated, restrictive and artificial zones in Europe.

Austerlitz, London is an exploration of W.G. Sebald's novel 'Austerlitz' (2001) which recounts the friendship between an anonymous narrator and an architectural historian named Jacques Austerlitz. In the process, it becomes the story of Austerlitz's rediscovery of his forgotten past: of how he arrived in England in 1942 on a so-called Kindertransport train as a refugee from Nazi Europe. With this in mind, the film forms an essayistic inquiry into Sebald's practice, reconstructing the way in which space and place inhere in the Austerlitz's depiction of anguished recollection.

The screenings will be followed by a Q&A with Emily Richardson, Sally Mumby-Croft, Henrietta Williams and Zoltan Biedermann.

Entrance to the venue is via the Canalside at Here East. A free shuttle bus operates to/from Here East every 10 minutes from Stratford station and Stratford International station on Fridays until 22:30. Find details here. Hackney Wick station for London Overground services is a ten-minute walk.