The Observatory is one of the best-equipped astronomical facilities for student training and research in the UK.

Initially established as a University of London facility (as reflected in the name until 2015), the Observatory has been exclusively managed by University College London since 1951. It is a hands-on teaching observatory, part of the Astrophysics Group in UCL's Department of Physics and Astronomy. 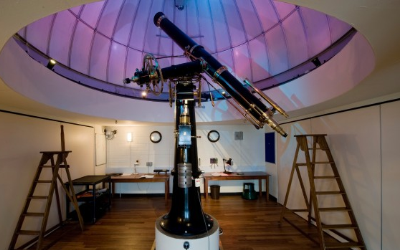 We are equipped with five permanently mounted telescopes, two lecture/classrooms, and a specialist astronomy library. We are reasonably easily accessible from the main Bloomsbury campus, ensuring that students have good access to the telescopes. 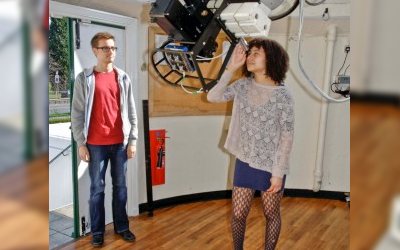 In addition to observing, students are trained in data-reduction techniques, the practical applications of astrophysical theory, and computational astronomy. This training can take place in the context of an undergraduate degree module, a student project, or the Certificate in Astronomy.

History of the Observatory:

Follow the history of the observatory from its foundation in 1925 how it was designed and built. See before, throughout and after the war and the how UCLO' facilities have expanded to how it is run today. We offer guided tours to the public (booking required), and are actively engaged in outreach activities to schools. Introduction to the Observatory:

Learn about our current site and get a brief overview of all five of our current telescopes in this short introduction video all about the UCLO.

History of the UCL Observatory:

In 1925 Mr J. G. Wilson offered to the University of London a 24-inch reflecting telescope owned by his late father, Dr W. E. Wilson, FRS. The telescope had been built by Grubb of Dublin in 1881 and was located at W. E. Wilson's private observatory in Daramona, County Westmeath, Ireland (see Wilson's privately published volume of Astronomical and Physical Researches). The gift was accepted. After consideration of many sites for the permanent location of the telescope an agreement was reached with Hendon Urban District Council to lease a site in Mill Hill Park for 999 years at a nominal rent. The Senate of the University raised the £5,000 cost of constructing a suitable building and additional funds were provided by University, King's, Bedford and East London (now Queen Mary University of London) Colleges and from the London School of Economics. This led to the foundation of the 'University of London Observatory' (ULO), a name which remained in effect until 2015. 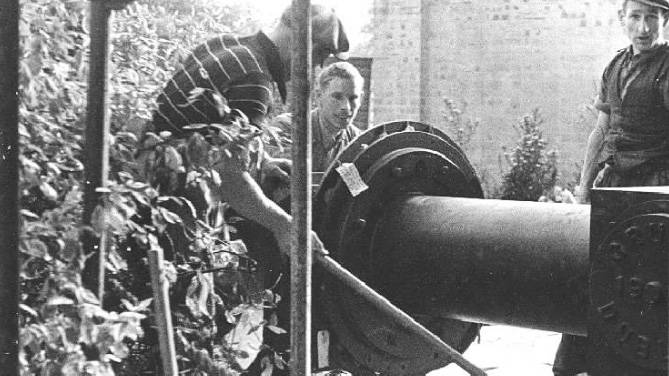 British Pathe produced a short (silent) newsreel of the opening, which is now available through YouTube; it features Dyson and the 'Wilson Observer' (later Director), C.C.L. Gregory.

The Observatory building was designed by Mr L. Rome Guthrie and constructed by Messrs Leslie and Co.; construction commenced in July 1928 and was completed in 1929. The Observatory was opened by the then Astronomer Royal, Sir Frank Dyson, on 1929 October 8; a contemporary report of proceedings is available in The Observatory magazine, vol. 52, p. 312, 1929; 333k pdf).

The original reinforced concrete observatory building contained the dome for the Wilson 24-inch reflector, a Solar spectrographic laboratory and darkroom, a computing room and a workshop. In January 1930, Mr H.R. Fry of Barnet presented the University with an 8-inch refractor made by Cooke of York in 1862: Mr Fry met most of the cost of its reconditioning and subsequent re-erection. A new small building was erected in 1931 to house the Fry refractor.

In 1934 the Radcliffe Observatory (then at Oxford) was being relocated near Pretoria in South Africa; the Radcliffe Trustees offered the University the twin 24-inch/18-inch astrographic refractor made by Grubb of Dublin in 1901 The offer was accepted and the telescope was dismantled and brought to London in 1935 together with its dome and rising floor. Additional land was rented from Hendon Urban District Council and a new building was constructed between 1937 and July 1938. The building cost £2300, with an additional £1000 for auxiliary equipment and furnishings and for the re-erection of the telescope, dome and rising floor. The new building was opened by the Astronomer Royal, Sir Harold Spencer Jones, on July 1st 1938.

At the outbreak of hostilities in 1939, the Observatory was officially closed, along with the small teaching observatories then at University College (Gower Street, WC1). The lenses of the recently installed Radcliffe telescope were removed and stored at the base of the heavy concrete pier for safety, the telescope being recommissioned in 1946. University College suffered heavily during the blitz and a 10-inch telescope was lost through enemy action. The Observatory at Mill Hill survived unscathed and a programme of spectroscopic research with the Wilson telescope was continued throughout this period; the observers would have benefited greatly from the blackout removing the problem of city lights! However, observing during the war could be eventful; witness the Wilson Telescope Observing Log for 1944 Aug 3:

“"...started exposure at 21h 44m GMT. Flying bomb exploded very close and shifted star in declination out of the field. Star recovered and exposure restarted at 21h 47m GMT. Just after starting the second time, a second flying bomb exploded. This was more distant and though it shifted image from the (spectrograph) slit, star did not go out of field and was quickly recovered. Exposure ended 22h 07m GMT."

(This incident appears to relate to a V1 bomb that landed at Hendon Aerodrome, with 34 casualties including 8 killed, and 193 houses damaged.) The observers that night were C.C.L. Gregory (the Director) and Miss E.M. Peachey, who as Professor Margaret Burbidge was later to become Director of the Royal Greenwich Observatory, subsequently taking up a post at the University of California, San Diego.

The Observatory re-opened officially in 1945 and those of the Gower Street telescopes which had survived the blitz were brought out to Mill Hill in 1946.

In 1951 administration of the Observatory was transferred from the University to University College and the Observatory was incorporated in a new Department of Astronomy at the College. In 1943, the University had been left a bequest by Mr F. Perren for the furtherance of optical astronomy and this was used to establish the Perren Chair of Astronomy in 1951: the Perren Bequest has subsequently assisted the development of the Observatory. The building of a north wing extension commenced in October 1952 and was completed in April 1953. This contained office space, a library and a lecture room. This was followed by a south wing extension begun in 1960 containing a spectroscopic laboratory and further teaching and office accommodation: building of the south wing was completed in 1961.

Despite these extensions, the rapid expansion in astronomy caused by the coming of the Space Age meant that by 1965 the Watford Way site had become overcrowded: an Annexe was acquired through converting premises in nearby Daws Lane. The Annexe initially contained an IBM 1130 computer and other facilities for lunar and planetary research, and was opened at 31-33 Daws Lane.

The Radcliffe refractor underwent an extensive programme of reconstruction: the dome and rising floor were replaced. the drive was rebuilt and a modern digital control system constructed. The Fry refractor was dismantled in autumn 1981 for refurbishment; during its absence, its place was taken by the recently restored Joynson Telescope - a 6-inch Cooke equatorial refractor made in 1863. A 7.5-inch Coelostat (solar telescope), made for the Observatory in 1929, is no longer in use, although the mirrors are still intact. The Fry refractor is now back in use in a new dome.

The Wilson telescope was retired in 1974 and was placed on permanent loan with the Merseyside Museums; it was replaced by a new 24-inch reflector of modern design supplied by Ealing Beck of Watford. This new instrument was named the Allen Telescope after Professor C.W. Allen Director of the Observatory and Perren Professor, 1951-72 and was officially opened by Professor D.W.N Stibbs, Napier Professor of Astronomy at the University of St.Andrews, on May 22 1975. The Allen telescope control system was replaced in the summer of l990 by a new computer controlled system supplied by DFM Engineering of Boulder, Colorado.

For two decades following the 1974 installation of the Allen telescope, the Observatory and its Annexe provided facilities for undergraduate teaching in practical astronomy and support for research in interstellar physics, star and planet formation theory, geological surveying of planetary surfaces, and stellar abundance studies. Growth in student numbers and new courses eventually meant that the Observatory's facilities were not large enough to teach classes efficiently. Therefore, in 1998 plans were made to expand the teaching and observing site in Watford Way and to move the Planetary Geology group to the main UCL Campus in Gower Street. Part of the funding for new buildings arose from the disposal of the Annexe building; most of the remainder came from generous gifts from the Kirby Laing Foundation, the Curry Trust, and the Perren Fund.

UCLO in the New Millennium

Building works completed under the direction of Dr Peter Thomas in 2000 provided a new structure on the Observatory's southern perimeter to house three telescopes (including the restored Fry refractor and a Celestron C14), refurbished and expanded classroom areas, and much-needed office and workshop space. In the other domes, the Allen Telescope had as its main instrument a spectrograph with a CCD detector, and the use of photographic plates on the Radcliffe Telescope had been superceded by video imaging and large-format CCDs. CCD cameras are also used on the C14 telescopes, both for educational and training purposes, and for an active research programme studying extrasolar planets.

A second C14 telescope was installed in 2009 , part of a strategy to open up opportunities for 'unattended' or 'robotic' observing, whereby data can be acquired under remote or robotic operation. At the same time, an active programme of fund raising began with the aim of purchasing a new large robotic facility as the best performing located in the UK to perform research within the teaching programme.

Beginning in 2001, the teaching of astronomy at the Observatory expanded to provide for students enrolled in a part-time evening course at UCL, the popular Certificate of Higher Education in Astronomy. Public and school visits each year typically involve of order 1000 visitors per year who tour the premises and look through telescopes if conditions permit. On a single day in 2004, the Observatory was host to 560 visitors who arrived from 6.00am onwards to view the historic Transit of Venus on June 8th.

In 2018 the UCL Observatory purchased a new 80cm diameter reflector from ASTELCO to replace the Allen telescope in the Wilson dome. In April 2019 we are awaiting Factory Acceptance tests for the new telescope named "Perren" after Mr F. Perren as the single largest contribution to the purchase of this unit in 2007 was from the Perren Fund.

Teaching has historically been focussed on the introductory first-year courses (including, since 2008, programmes for all Physics students), a second year experimental module, third-year advanced practical teaching modules and 4th-year project work. In 2018, director Giorgio Savini established a collaborative link with KonicaMinolta Laboratories Europe to grant student access to a network of Robotic Telescopes in dark sky sites in the Southern Hemisphere (Chile and Spain) as well as a remote site in Spain, giving UCL astrophysics students access to the entire sky.

Computing facilities at the Observatory and Annexe have been continually updated over the years, from hand cranked Brunsviga calculators in the 1940s to the current network of powerful servers, Linux workstations and PCs for staff and students.