The Fry telescope is an 8-inch refractor with a focal length of 126 inches. It was made in 1862 by the celebrated telescope maker Thomas Cooke, and was presented to the Observatory in January 1930 by Mr. H. R. Fry of Barnet, who met most of the cost of its reconditioning and re-erection at this site (see History of the Observatory for further information about that gift). The Fry is used extensively for student instruction, for solar and planetary observations, and by members of the public on open evenings.

The Fry has a traditional German Equatorial mounting, incorporating a weight-driven clockwork drive . It is equipped with numerous eyepieces, a micrometer, a visual spectroscope, camera adapters, and a full-aperture narrow-band H-alpha filter for solar observing.

Observing the Sun requires special filters; while structures such as sunspots are visible through a white-light filter, the H-alpha filter reveals the chromosphere. The narrow band of wavelengths emitted by hydrogen gas is observed, and structures such as filaments (dark features in photograph) caused by the absorption by hydrogen gas become visible, when they would otherwise be blocked out by the glare from the rest of the photosphere and chromosphere.

Photography is carried out with the use of a digital SLR camera. The main targets are the sun, Moon and the planets, and occasionally bright nebulae and star clusters; fainter objects require longer exposures, which the tracking accuracy of this instruments doesn't easily allow. There are two methods of photography: prime focus, which in effect uses the entire telescope as a telephoto lens; and eyepiece projection, which includes the use of an eyepiece for magnification of the image. Either method is suitable for taking pictures of the Moon, with prime focus being used to image the Moon's full disk. The planets are usually imaged using eyepiece projection, to increase the image scale.

An Astrovid 2000 video camera allows high-resolution (diffraction-limited) imaging of the Moon and the planets. The system is basically a CCD camera which continuously takes short exposure images, more suited to the tracking systems of the two refractors. The image obtained can be viewed real time on a video monitor and saved to tape. The video tape can be reviewed later, allowing those images caught at times when the atmosphere is uncommonly steady to be "captured" and saved to computer disk for further image processing.

The Fry was dismantled for refurbishment in 1982. This long-term project was completed partly at UCL's Bloomsbury campus, and partly on the Mill Hill site, with many parts being made or restored in the Observatory's workshop. The work, funded by grants from the Thriplow and Pilgrim Trusts, was completed in 1997 by engineer and master craftsman Ron Holder (1931–2008), who provided the following notes:

"The main part of the telescope is made up of bronze and brass components, which were badly corroded. They had to be cut and filed to take away the layer of corrosion, and then cleaned, polished, and relacquered. The main barrel is in three sections: a central section made up of cast iron with flanges, to which brass tubes with bronze flanges are bolted at each end. Brass screws are used for the joining, all of which had to be remade.

One of the greatest difficulties we had with the project was with the setting circles, inlaid with silver and finely engraved. If contaminated with any cleaning compound, the engraving would disappear, which was a problem because they are inlaid in bronze which was in serious need of restoration. They had to be very carefully masked, with the bronze surrounds exposed.

Handles used for movement and locking of the telescope were originally made of English walnut, and for an antique instrument we felt it was important to preserve the character of the telescope. They were rebuilt to original specifications, using new walnut but retaining the original fittings.

The field-illumination lamp, which exposes red light to the field was covered with butterfly shutters which had been lost. I copied the design from the Joynson which had the same arrangement, enlarging the shutters to fit this telescope, and remaking all the parts.

The name of the maker – Cooke of York – was engraved on the part of the eyepiece mount that allows it to move. Due to excessive handling, this mount had deteriorated, and was almost black. The brass was cleaned, so that the engraving was again visible, and then covered with a layer of perspex 1/4" thick. This important and historic part of the telescope was therefore preserved.

The finding telescope was badly corroded, but fortunately with careful filing, cleaning, emerying, and polishing, the original tube was retained. It was fitted into its clamping feet with a small amount of neoprene rubber, protecting it from further wear at the clamps. The end of the tube was badly damaged, but the cap was removed and restored to its 1862 condition.

The main sections, when cleaned, showed traces of the original lacquering, but it was decided that the body should be cleaned and then stove enamelled with an egg-shell finish. The bronze end-flanges were polished for an attractive appearance. The main body of the mount was originally covered by figured mahogany, which was preserved, with the fixing brass screws replaced.
[The stove enamelling of components of the Fry and Joynson telescopes was carried out by Mr. A. King of Unique Enamellers Ltd., Rotherfield, East Sussex.]

The original lead weight balance on the declination axis was restored and stove enamelled. We added a brass and stainless-steel adapting rod to hold small enamelled weights to be added to the lead weighting as required, to compensate for the extra equipment which will now be used with the telescope.

Many of the fixing bolts for the structure of the telescope were originally steel with nickel plating, which had flaked away, leaving badly rusted bolts. It was decided that stainless steel would give a similar appearance, without the threat of corrosion.

Attached to the main base of the telescope is a small cast iron shelf to support the weight-driven drive. The drive unit was in bad condition, having been made with corrodible metal plates which have now been stove enamelled. The mechanism which incorporates governor speed control has been restored. The unit has been fitted with a stainless-steel non-corrodible cable to take the drive weights. All shafts and gears from the drive to the telescope were restored and some remade. The driving weights themselves have now been stove enamelled." 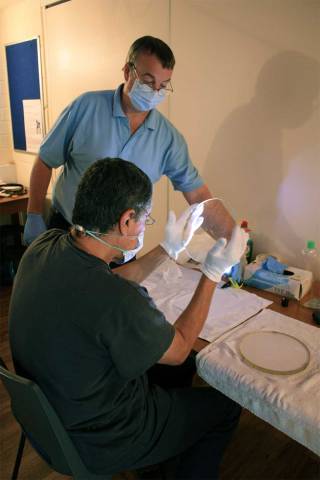 The doublet objective lens, after removal in its cell from the telescope by Mick Pearson, was disassembled and cleaned by Drs Francisco Diego and David Brooks in August 2014 (for the first time in at least 25 years). Mick cleaned all cell components at the same time.
Francisco provide the following notes:
This 204-mm diameter lens is a typical crown-flint (biconvex, plano-concave ) achromatic doublet, air spaced by 3 shims approx imately 0.2mm thick.

An inspection of the lens under strong backlight, on dark background, showed a lot of dust, surface striae (perhaps due to improper cleaning done previously), humidity marks in the inter-lens faces, lots of bubble inclusions charactistic of old glasses, and severe fungal attack around the edge on the flat surface of the flint component (the back surface of the lens facing the inside of the telescope tube). In addition, there were a lot of sandy grit particles (around 0.2mm in size) loose around the external surface, perhaps accumulated after decades of road traffic dust, bonfires, etc. We took a sample for further analysis.

All parts were marked clearly to preserve relative positions, prior to dismounting the lens from the brass cell. MP cleaned the cell and bolts in the mechanical workshop, while FD separated the two components and DB proceeded at cleaning the crown biconvex by gently rubbing it with special lens tissue while immersed in a bath of warm water with a bit of liquid detergent. Special care with the air-spacing shims, which luckily remained in place.

FD (wearing protective gloves) treated the fungus spots on the flint component by rubbing them with lens tissue soaked in a solution of ammonia and hydrogen peroxide. This proved very successful in removing the fungal marks. DB then cleaned this lens the same way as the crown one. For completeness, the same anti-fungal treatment was given to all four surfaces.

Wearing mouth masks, DB and FD gave a final distilled water rinse and alcohol rubbing to all surfaces. DB and FD inspected each lens in transparency against a bright backlight over dark background in order to locate and deal with small areas still scattering light until none were visible.

FD brought both lenses together ,and they were placed inside the clean cell. The assembly was left protected on the table ready to be re-installed in the telescope tube by MP.

MP removed a few spider webs and dust from inside the tube and gave it an inner coat of black-matt paint prior to final re-assembly a few days later.

Image Galleries:
We have an open creative commons resource of space images.