Reducing risk for refugees in disaster-prone areas of Bangladesh

Researchers from UCL are working with Rohingya refugees living in areas prone to cyclones, floods and landslides, to help build their resilience to future extreme weather events. 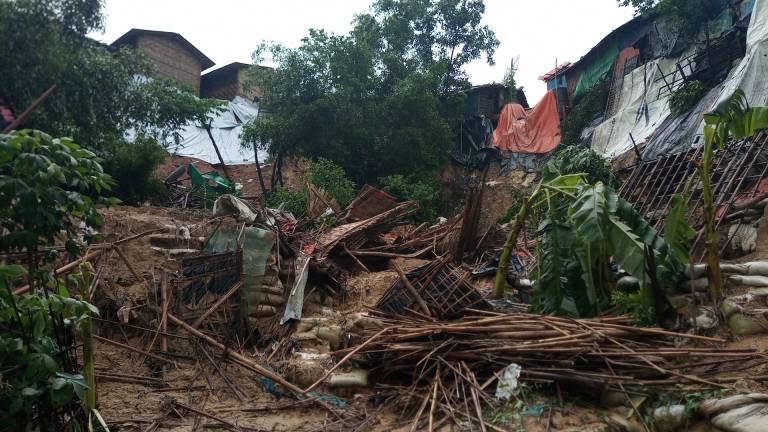 More than one million Rohingya refugees, facing genocide and displaced from their homes in Myanmar, live in overcrowded camps in the Cox’s Bazar district of Bangladesh, on its south-eastern coast. The temporary settlements are susceptible to cyclones, landslides and flash-flooding which strike almost every year.

To reduce disaster risk for these vulnerable people, a team from UCL’s Institute for Risk & Disaster Reduction, led by Professor Peter Sammonds and coordinated by Dr Bayes Ahmed, is collaborating with colleagues at the University of Dhaka, Bangladesh. They are devising early warning systems to improve preparedness and build resilience against extreme weather events.

“Our partnership has built a detailed picture of landslide hazard risk and used it to develop early warning systems that could help avert human disaster,” explains Professor Sammonds. “By assessing cyclone risk in the Cox’s Bazaar district and within refugee camps we built a risk model that could provide predictions of where cyclones might cause most damage to inhabitants.”

The model’s predictions compared well with actual data of the impacts of a cyclone that hit the region in 1991. It highlighted those areas in the north-western and southern parts of Cox’s Bazaar were most at risk.

The team also worked closely with refugees and host communities to better understand their vulnerabilities and how these could be addressed. More than 500 refugees were surveyed and participated in focus group discussions to understand what actions they took to prepare themselves for landslides and other environmental hazards. These included responding to early warning systems, storing dried food and medicines and moving to safer places.

““Our partnership has built a detailed picture of landslide hazard risk and used it to develop early warning systems that could help avert human disaster.”

Recommendations made by the study team include providing all refugee households with shelter strengthening kits, raising awareness of weather-related risks, and ensuring their sustainable repatriation in Myanmar. The team is now working with policymakers to improve tools to assess hazards, which will help the whole Rohingya refugee and host communities to become more resilient.

“These people have lost their homes once and fled atrocities,” explains Professor Sammonds. “We want to reduce their risk of experiencing further disasters and help them to build resilient futures.”

> Resilient Futures for the Rohingya Refugees

Target 13.1 Strengthen resilience and adaptive capacity to climate-related hazards and natural disasters in all countries